Was Clintonomics Good for Working People? 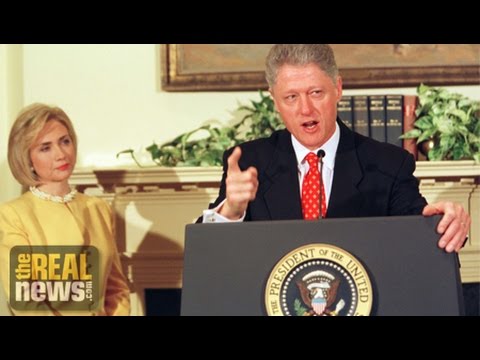 As the Democratic party campaign moves towards the South Carolina primary, of course the big question is, will Bernie Sanders be able to break through, particularly amongst African-Americans? And generally, nationally, will he be able to speak to African-Americans and Hispanics, Latinos, in general poor people. And there is the assumption that Hillary has the advantage there, and there is also the sort of underlying idea that the Clinton years were good for poor people, and Clinton–that is, President Bill Clinton years. And that is going to rub off on Hillary.

Well, were the Clinton years good for poor people? And that’s the subject of our next interview. Now joining us from the PERI Institute is Bob Pollin. Thanks for joining us.

POLLIN: Thank you very much, Paul, for having me.

JAY: And Bob is the co-director of the PERI Institute. He’s the author of Greening the Global Economy, and here it is. And he’s also the founder of some of the policy that Sanders, candidate Sanders is using, a transaction tax and some others. He’s been working on that policy.

So talk about Clinton economics. Were they good for poor people or not?

POLLIN: No. that’s the short answer. This is something I actually looked into. Thank you for mentioning my book. Twelve years ago I published a book called Contours of Descent that went through the experience of Clintonomics in detail. I mean, if you just want to start with one simple metric, which is the change in the official poverty rate under Clinton, okay, under Clinton the official poverty rate for individuals did go down relative to Ronald Reagan. That’s not a very high standard. It only went down, though, under Reagan, the average for eight years it was 14 percent. Under Clinton it was 13.2 percent. But even under Jimmy Carter, which was considered the, quote, “years of malaise”, the individual poverty rate was 11.9 percent.

So Clinton did much worse than Jimmy Carter did just on this simple metric of what was available for poor people.

JAY: And it’s generally considered wages went up, and things got a little better for poor people and for working people. Is that not the case?

POLLIN: Okay. So what happened under Clintonomics was, first of all, even before Clinton came into office, in the interregnum period, between the time that he was elected in November and came into office January the 20th, or thereabouts when the inauguration was, he transformed his economic agenda from what he had called as a candidate called putting people first, it was an investment in infrastructure and jobs and education, to basically doing the bidding of Wall Street. And he himself acknowledged that. So I’m, this is not–.

JAY: Acknowledged it in what way?

POLLIN: Well, he said it in–there is a book by Bob Woodward, the Washington Post reporter, called The Agenda, a 1994 book, which–apparently Woodward was sitting in on the meetings when they were planning the economic policy under Clinton. And he, Bill Clinton himself said, quote from Bob–I don’t have the exact quote. But basically he said, well, what we’re doing now is turning against the people that voted us in and supporting the bond market and Wall Street. This is Bill Clinton talking, this is not me talking.

And it’s true that the policies that he pursued were very much–I mean, basically the idea of deregulating finance did not start with, with George Bush.

JAY: Which is what the Clinton campaign’s been saying. Hillary Clinton’s been talking about how deregulation helped lead to the ’07-’08 crisis–

POLLIN: And it did.

JAY: –and it starts with Bush II.

POLLIN: That’s false. I mean, that’s just historically false. It was passed under Bill Clinton. It was not passed under George Bush.

JAY: What were the things that were passed that would be considered deregulation?

POLLIN: Basically the, the laws then–laws from the 1930s, the so-called Glass-Steagall act that gets referred to a lot that came in under the New Deal and did a reasonably good job of stabilizing financial markets, were repealed under Bill Clinton. Not under Bush. In fact, had the Democrats, led by Clinton, not supported financial deregulation, it never would have happened. Because of course you’re going to get the Republicans supporting that. But the main thing was that you got most of the Democrats supporting it under the leadership of Bill Clinton and his advisors, including Larry Summers.

JAY: Well, that’s another thing. Who were his advisors? Because there’s been a lot made of having Wall Street, a Wall Street finance team be your team.

POLLIN: His top advisor was Robert Rubin, who came right from Goldman Sachs. He was a co-director of Goldman Sachs. He became Clinton’s top economic advisor. So that’s, the economic program was called Clintonomics, or Rubinomics. Larry Summers, who was a Harvard professor at the time, was effectively, you know, the protege of Rubin. And in fact, the, the economic report of the president, the last one under Clinton in the year 2000 actually says that, you know, financial regulations might have been valid for the 1930s. Might have been valid for the 1930s. But are no longer necessary today.

This is, this is Clinton. This is not Reagan or Bush. So yes, so Clinton does the bidding of Wall Street, and that was, you know, consistent. And that comes forward on trade policy. You know, as soon as Clinton came in, what did he do? He tried to push through and succeeded in pushing through the North America Free Trade Agreement, NAFTA, that had been initiated under Reagan and then George Bush I. And Clinton just pursued that further, with–under great protest from the labor movement. And people knew, you know, many, many people said, yes, this is a great deal for big business. It’s a terrible bill for American workers. There is no, there is no surprise there. There is no secrets.

So people knew that. He did it anyway.

JAY: But wages did go up, did they not, during the Clinton time? Unemployment did come down. And I mean, he inherited a mess from Reagan, sort of the way Obama and–.

JAY: I mean, there was a pretty messed up economy. And then there seemed to be growth. The tech center explodes.

POLLIN: So here’s what happens. So we have this bubble economy emerging under Clinton. Under the bubble economy you do get unemployment falling and wages starting to rise by the end, by 1997, not before then. I mean, the average–if we take the eight full years under Clinton, okay, as opposed to what happened with it going up and going down, under the eight full years of Clinton, the average wage was about 10 percent lower than it was under Jimmy Carter. Okay? The average wage was 2 percent lower than it was under Reagan and Bush.

So yes, we have this image. And it is true that first things got–were worse. Then they started getting better, because we had a debt-financed bubble that was driving the economy. That bubble also collapsed two years–two months after Clinton left office, in March 2001, way before 9/11. In March the bubble collapsed. So you did have this, you did have a strong upward swing financed by a bubble.

JAY: Well, I know you’re, you’re an economist, not a, primarily a political analyst. But why does the Clinton name seem to have, resonate amongst poor African-Americans and working-class African-Americans who–you know, if generally that’s the case that wages were actually down a little bit–.

POLLIN: Not a little bit. I mean, basically the trend line, you know, we’ve had a long-term trend line down with average wages since the early 1970s. Okay. Clinton did not reverse that. He was elected on a program to reverse that. It’s exactly what he said he was going to do. It’s called Putting People First, that was his agenda. And you know, other than the rhetoric, it did not succeed. It did–the conditions were not better for poor people. They’re not better for working people. Yes, you did have a lower unemployment rate for a period, and you did have wages going up for a period. But [inaud.] all eight years.

JAY: As you say, because it, so much of that is based on the bubble.

POLLIN: And it was all based on the bubble.

JAY: So it’s, I mean, some people suggest it’s not fair to give Hillary credit for this. She wasn’t president. Do you see a distinction between her economics and her husband’s?

Now, Hillary has obviously moved in response to Bernie Sanders to developing all kinds of populist messages. What are her real, is her real economic agenda? Of course, we won’t know till she gets elected. And in the meantime, of course, to get elected she’s right now going to move left to try to compete with Sanders.

JAY: All right. Thanks very much for joining us, Bob.