NATO and the Libyan People are Not One 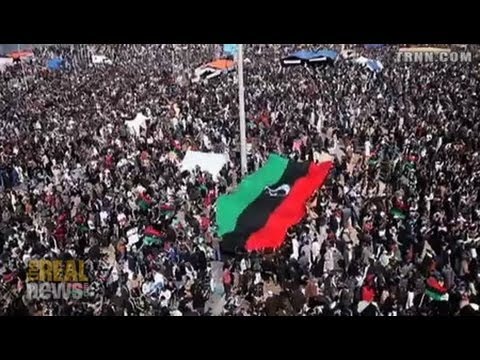 Over the past few months, we have covered many aspects of the Libyan war, mostly critical of the NATO intervention, which is clearly illegal and using humanitarian language to cover up imperialist objectives. If the mission had really been about saving Benghazi, and not creating a more compliant regime than Gaddhafi’s, there were ways to do that which would not have resulted in so much loss of life. But the NATO agenda does not mean that the people of Libya have no right to overthrow a dictatorship.

There has been some criticism of our Libyan coverage in the comments section of our website. It has mostly focused on reports from the field that show Libyans applauding NATO strikes in support of the rebellion. I think when journalists in the field report on what they see, it’s ridiculous for people to demand they adjust it or present it in a way that serves some propaganda position. If the reporters see that people in Bengazi support the NATO intervention, they should say so. It’s perfectly understandable why such people would appreciate NATO support, what ever its real motives. In a war, people seek allies, for better or worse, where they can.

It’s one thing to oppose the NATO/US intervention, which I think people here should do, and another to discredit and attack the thousands of ordinary Libyan people who want an end to the dictatorship.

What the leadership of the rebellion turns out to be made of, is yet to be seen. There are clearly some very shady characters, CIA connected types, opportunists from the former regime, and so on. There may also be some legitimate representatives of the people. At any rate, it’s not up to us. It’s up to the Libyans.

Our concern first and foremost, should be for international law. The UN resolution was a blank check to organize regime change in the interests of Anglo, American and French imperialism. The Russians, Chinese and other governments on the UN Security Council didn’t really much care what happened, as long as they were not shut out of the oil, post-war. We should care. This is a terrible precedent. We should demand an immediate end to all NATO involvement in Libya.

As a news organization, we will continue to report what we see. There is a popular aspect to this rebellion, and if that’s what our journalists observe, we will continue to say so. We have also reported on allegations of war crimes against the rebels and the pro-Gaddafi troops. There is evidence of targeting of black migrant workers by some rebels. There is evidence of NATO operatives on the ground, directing and training rebels. There appears to be significant numbers of Libyans who still support Gaddafi. Real life is complicated.

The rebellion is made up of many diverse political, tribal and class elements. While the forces of reaction are very strong, the people are armed and have fought for their rights. The conventional army is no more, which is what is so troubling for NATO leaders who are making noises about putting troops on the ground to "create a transition to law and order". They are afraid of what kind of state emerges from an armed people demanding democracy. We will see if the popular will asserts itself, or if forces from within the neo-liberal Libyan elite sell out the Libyan people – again.