Denying Civil Rights is a Crime 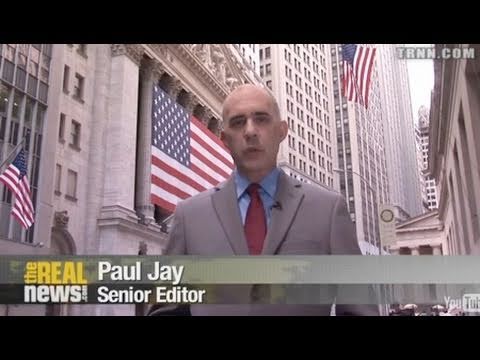 PAUL JAY, SENIOR EDITOR, TRNN: Welcome to The Real News Network, I’m Paul Jay on Wall Street in New York City. This is a report and commentary on the mass arrests at the Toronto G20 – held one year ago. You may be wondering why I’m doing the report from New York.

The reason is simple. The G20 in Toronto was a declaration by the global governing elite that the economic Â crisis, largely triggered by banks and financial institutions located a stones throw from where I’m standing, would be paid for by ordinary working people everywhere.

This is also about the violation of civil rights of people who resist bearing the consequences of a crisis they didn’t cause. Because the more than 1000 arrests at the Toronto G20 was a statement by the Government of Canada that mass protest will be met with mass arrests.

But illegal detention and the use of unwarranted violence is just that – illegal. And to prevent it from happening again, does there not have to be accountability by the police and politicians who issued the orders and swung the batons??

There are many questions that need answers. What right is there to protest in Canada if laws like "unlawful assembly" and the bizarre "Breach of the Peace" can be hauled out willy-nilly to make mass arrests, detain people for hours, and then not charge anyone – after their right to protest has been violated. I wonder what our political leaders would have said if Mubarak had used this type of legislation in Tahrir Square?

As I pointed out in a previous report, the missing words in the G20 declaration were higher taxes on the wealthy and higher wages for workers. Both obvious ways to achieve the stated goal of fighting deficits and dealing with a few of the underlying factors that led to the crisis in the first place.

What the G20 leaders did agree to was this: "[The] advanced economies have committed to fiscal plans that will at least halve deficits by 2013 and stabilize or reduce government debt-to-GDP ratios by 2016"â€”which we all know means cuts to Â pensions, social services and other austerity measures. The arrests at the G20 were made in defence of this global vision.

Here’s what Ontario Ombudsman Andre Marin said about the policing of the Toronto G20.

ANDRE MARIN, OMBUDSMAN OF ONTARIO: And for the citizens of Toronto, the days up to and including the weekend of the G-20 will live in infamy as a time period where martial law set in the city of Toronto, leading to the most massive compromise of civil liberties in Canadian history.

JAY: I had my own run in with Toronto Police Chief Blair at a news conference that took place in the midst of the G20 weekend when I asked him about the infamous Pubic Works Protection Act, the legislation the Ombudsman later called martial law.

PAUL JAY AT JUNE 26, 2010 PRESS CONFERENCE: The act allows, essentially, for elimination of probable cause for search and seizure.

BLAIR: Yeah, by all means. I’ve actually read it at great length. It’s an act that in fact has been in the province of Ontario since 1939. Its authorities have been tested through the Ontario Court of Appeal and upheld. It’s not an act of which we are not familiar.

PAUL JAY: Of course, we now all know, that suspending probable cause was exactly what the legislation did. As far as having passed muster at the Ontario Court of Appeal, the decision of the Court in the 2005 case R. vs Campanella, about a woman who was searched entering a court house and then arrested for possession of marijuana, Â was that it was a justified use of the PWPA because there was a big sign saying people entering would be searched, and people had the right to walk away, not enter the building, and avoid the search. At the G20 the Act was secret up to the last minute, was not supposed to apply throughout the downtown core Yet people were arrested if they didn’t comply with demands for ID or to be searched . . . what happened at G20 precisely violates the logic of the Court of Appeal decision. There was no sign telling people they would be searched. They had not option to walk away. If it’s true the Chief was "very familiar" with all of this, then he knowingly violated people’s basic rights, that is, he broke the law.

BLAIR AT JUNE 26, 2010 PRESS CONFERENCE: The authorities in that act are limited, as all authorities in provincial and federal statute, by the Charter of Rights and Freedoms.

JAY: The Ombudsman has no doubt it was in violation of the Canadian Charter of Rights and Freedoms.

MARIN: The regulation which gave the police extravagant new powers of arrest and detention, powers which, in my opinion, were likely illegal and unconstitutional. And so all the detentions that took place and the arrests that took place that day were an abuse of power.

JAY: Toronto Police Chief Bill Blair may have taken most of the heat for what Â happened during those days, but he also received some kudos. On the final night of the G20 weekend, after over 1000 arrests, and while hundreds of people were being illegally held in a detention center, Chief Blair was meeting with the current leader of the ‘free world’, receiving congratulations from President Obama on the way he handled security during the weekend.

But President Obama really should have been congratulating Canadian Prime Minister Stephen Harper. While most of the news media have been targeting or defending Chief Blair, we have been saying for months at The Real News that the policing in Toronto was commanded by the RCMP. The Mounties have been working hard at shifting the focus to Chief Blair and the Toronto force, but facts prove otherwise.

The command was the Integrated Security Unit and the operational command of that was RCMP superintendent, Alphonse MacNeil. Â We concluded that the primary responsibility for such violations of civil rights, the decision to conduct mass arrests, the systemic use of violence and other repressive tactics . . . can be laid at the feet of the federal RCMP.

Now everything we have been saying has been confirmed. By whom? No less than Chief Blair himself. Here he is answering a question from Carol Off, host of CBC’s As It Happens.

CAROL OFF, CBC RADIO: Chief Blair, you were the public face of this security event, whether you liked it or not. How much input actually did you have over the planning leading up to this police operation?

BILL BLAIR, CHIEF, TORONTO POLICE SERVICE: Quite frankly, I was not involved in much of the planning. I was aware of some of the things that were being planned, I was being briefed, but I was not the operational commander, I was not on the unified command team or in the steering committee. […] The Integrated Security Unit and the command structure that was put in place, I was assured that it was an appropriate command structure. There was 29 different police services, and, you know, it was primarily–the bills were being paid by the federal government. And so I was led to believe that that was the most appropriate command structure for that event. […] Operational commanders from the Toronto Police Service, answering–you know, they were responsible for operational decisions and answering through the Unified Command Centre located up in Barrie.

JAY: So there you have it: the Unified Command Centre in Barrie was commanded by the RCMP. Â After months of evading questions about the line of command, why has Chief Blair spilled the beans now? One can only speculate, but there are two inquiries that will be reporting soon on police actions at G20 and perhaps he needs to establish his role before those investigations are made public.

Why does all this matter? Because if there is to be an assurance that this will not happen again, there must be accountability. From the police officers that severely beat so many protesters, to the decision not to contain the window breaking/police car burning violence that became the pretext for the mass arrests, to the illegal detention of thousands of people.

For the G20 the RCMP reported to former spy chief Ward Elcock who was then working . at the Privy Council. Elcock was overall responsible for security at the G20. The Privy Council answers directly to the Prime Minister Stephen Harper.

From the Toronto Police, to the provincial government, to the RCMP, to the Prime Minister the full story must come out, and those who have violated people’s rights and therefore committed crimes, should be charged. And if found guilty, they should be punished. Only an independent federal public inquiry can unravel the web of half truths that are being used to justify these "days of infamy".

It’s rather ironic, that President Obama and Prime Minster Harper can congratulate the policing of the G20 and its mass arrests.

What’s their message? If you don’t like the kind of economic policy that serves the most parasitical elements of capital, if you don’t want to pay for the crisis, look out …. we have some repressive laws and innovative police tactics to show you.

Now the question is, what kind of message do we have for them? Let us know, at TheRealNews.com

Thanks for joining us, on the Real News Network.