Pernille Ironside: The Chief of the UNICEF Field Office in Gaza describes the growing death toll and the rising humanitarian crisis

Pernille Ironside: The Chief of the UNICEF Field Office in Gaza describes the growing death toll and the rising humanitarian crisis 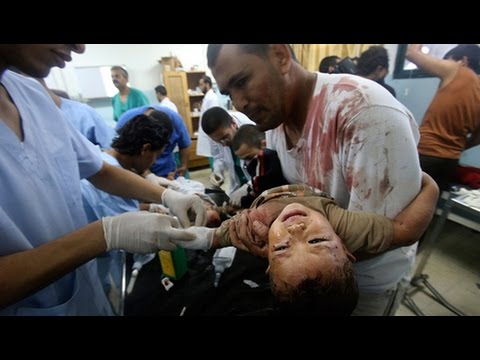 SHARMINI PERIES, TRNN PRODUCER: This is The Real News Network. I’m Sharmini Peries coming to you from Baltimore.

Israel’s death toll now is at 59–three civilians and 56 soldiers. This is against a Palestinian death toll in Israel’s ongoing offensive that has now surpassed 1,370 people, including 315 children, and more than 7,700 are wounded. Conditions on the ground are continuing to deteriorate after Israel bombed Gaza’s only power plant, leaving 1.7 million of the Gaza’s 1.8 million people with no power, running water, or sewage treatment. This comes after Israel’s defense forces targeted a UN school in /jʌdəˈliə/ refugee camp, the sixth UN compound that has been strucked over the past three weeks of the Israel’s military offensive Operation Protective Edge.

Now joining us to discuss the situation on the ground is Pernille Ironside. She is the chief of UNICEF’s field office in Gaza, where she is leading UNICEF’s emergency response across the Gaza Strip in the occupied Palestinian territory. Thanks for joining us, Pernille.

PERIES: So, Pernille, Israel has destroyed Gaza’s only power plant and bombed schools. What are the conditions you are facing on the ground?

IRONSIDE: Sadly, this has just continuously declined over the past weeks since I joined you. On the most holy day of celebration that took place on Monday to end the month of Ramadan, there was a children’s park that was targeted while children and their families were taking a small risk respite during your day, and we lost over eight children, who were obliterated right that instance. Just yesterday, during what was meant to be a humanitarian pause that was declared by Israel, a local market was hit and there were 17 people killed, including children. You also referred to yet another UN school hit yesterday early morning while children and their families were sleeping, and leading to 16 deaths. This is an incredibly high toll on the civilian population, and it’s not abating at any point yet.

PERIES: Without electricity, water, sewage treatment, how are you managing to protect the people that you are responsible for?

IRONSIDE: There is a massive humanitarian emergency response under way. This includes providing hygiene kits to the population who’s displaced in collective shelters, water trucking, enabling municipal water technicians to carry out the daily kind of operations in order to maintain the water system to the extent that it’s feasible right now, and also to make urgent repairs. But the fact of the matter is that we are now facing a scale where over 400,000 people in Gaza out of 1.8 million are displaced, either in shelters or with family members or in public spaces. They are without water on a continuous basis. There is a real risk of disease outbreak, given the unsanitary conditions and the lack of water to maintain hygiene standards. And it’s becoming increasingly difficult also to feed the population, because the remaining food providers, including bakeries, are simply–they’re maxed out. I mean, it’s an incredible amount of work to be able to provide assistance under unsafe conditions to that many people right now.

PERIES: While you’re providing these essential and protective services, Pernille, you must still be experience difficulties in terms of providing support for the people that are also not under your care but needing your services, yes?

IRONSIDE: Yes. We have two main concerns from the humanitarian community, firstly that the protection of civilians and civilian infrastructure must be prioritized as a humanitarian imperative, and secondly, that there is safe and unfettered humanitarian access granted to the humanitarian community in order to assist the population in need. At the moment, neither of these fundamental, basic tenets of international humanitarian law are being respected by either party, which is resulting in just a compounding of the human suffering, which will only get worse if this continues.

PERIES: Yesterday we interviewed Omar Barghouti, a independent Palestinian human rights activist and a founding member of BDS, the boycott, divestment, and sanctions movement. We asked Omar to respond to the UNRWA’s condemnation of Israel’s latest attack on the UN school that was serving as a shelter for Gazan civilians, mostly women and children. Omar Barghouti had this to say.

OMAR BARGHOUTI, INDEPENDENT PALESTINIAN HUMAN RIGHTS ACTIVIST: It’s too little too late. Because of the UN’s silence in the past two attacks on UN schools, which were designated as humanitarian shelters and whose coordinates were provided to the Israeli military, their silence before is what led the Israeli [military] to carry on with their massacres against Palestinian civilians. Especially children and women are sheltering in UN schools. So they have Palestinian blood on their hands, the entire UN system (…).

PERIES: Pernille, Omar Barghouti basically criticizes the UN for doing too little. What is your response?

IRONSIDE: Well, I think one has to bear in mind that the secretary-general has spoken out about the attacks on the UN schools. He’s called it appalling. He has clearly stated that every home, every school, every refuge has now become a target. He has spoken out quite strongly. And this is not just one statement, but several statements over the last few weeks, in addition to the heads of other UN agencies, including UNICEF, who have also issued multiple statements, the High Commissioner for Human Rights, the Emergency Relief Coordinator, the head of the UN refugee agency for Palestinians. I mean, there have been multiple voices at various levels of the United Nations that have spoken out strongly about not only this incident but the escalation that is continuing to take place over the weeks. The Security Council has been seized of this matter as well. The secretary-general himself came to the region to meet with the various interlocutors in order to broker a ceasefire and to limit the humanitarian impact.

What one doesn’t see is beyond these very public statements and kind of delegations are the hundreds of daily interactions that take place between the United Nations and the parties to the conflict, particularly with Israel, that everything from multiple coordinations of every single location where civilians are gathering, safe shelters inside Gaza, to negotiating the humanitarian corridors and humanitarian access for commercial–for humanitarian goods to come in through the commercial access at Kerem Shalom. Literally hundreds of negotiations and discussions take place that are not in front of the media and that are essential.

PERIES: And yet, Pernille, the people under your care and custody are still at risk, because they are not really paying attention to the coordinates provided by the UN in terms of where people are in refuge.

IRONSIDE: There is no ceasefire. We are in an active hostility at the moment. So in that sense, yes, this is–unfortunately, we’re in the midst of a conflict. And we–as I mentioned, the fundamental tenets of the protection of civilians and the need to guarantee safe humanitarian access have not been respected by the parties. And so this is, remains a major issue for the United Nations and the entire humanitarian community to address.

PERIES: Despite President Obama’s condemnation of Israel’s most recent shelling of the UN school in Gaza, the U.S. is continuing to supply Israel with ammunition. What do you make of this action?

IRONSIDE: Well, working for UNICEF, our mandate is to focus on helping children and women. It’s difficult for me to comment on kind of weapons supplies. But clearly our position is that the fighting must stop, the suffering must stop. So that would necessitate a cessation to the hostilities and no further weapons being used on the civilian population.

PERIES: Well, thank you so much for joining us, Pernille. I know it’s difficult for you there, but hang in there and keep letting us know what’s happening there.