TRNN speaks with UNICEF's Gaza field chief Pernille Ironside about Israel's bombing of a UN school that killed women, children and UN staff and the realities of humanitarian relief in Gaza

TRNN speaks with UNICEF's Gaza field chief Pernille Ironside about Israel's bombing of a UN school that killed women, children and UN staff and the realities of humanitarian relief in Gaza 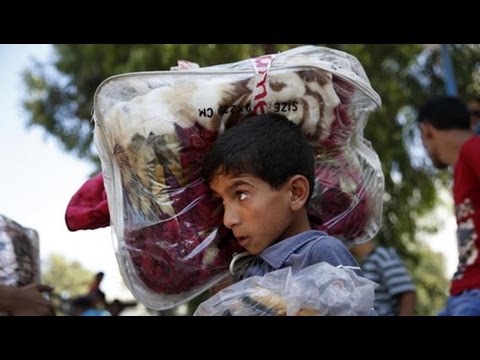 The Palestinian death toll in the Gaza Strip keeps on climbing, with Friday’s latest numbers reporting that 840 Palestinians have been killed, most of them civilians. On July 24, the clashes took another turn at a UN-controlled school in northern Gaza which is used to shelter civilians. It was hit, and at least 16 people were killed in 150 were injured. Take a look at this animation that The Washington Post produced. It shows how Palestinian civilians continue to make up the largest share of casualties in the Gaza conflict, especially children. There have been about 200 children already killed.

Now joining us to give us a sense of this tragic reality for Gazans is our guest, Pernille Ironside. She is the head of the UNICEF’s Gaza field office, where she’s leading UNICEF’s emergency response across the Gaza Strip in the occupied Palestinian territory.

Thank you for joining us, Pernille.

PERNILLE IRONSIDE, CHIEF OF GAZA FIELD OFFICE, UNICEF: Good to be with you, Jessica, and The Real News.

DESVARIEUX: So, Pernille, let’s talk about that school in northern Gaza that was hit. The UN was reporting that the school was used as a shelter by civilians, and an Israeli military source told Al Jazeera that Palestinian rocket fire had been detected in the area and that it might have fallen short and hit the shelter. But Hamas is saying that it was Israel. It’s a lot of back and forth. Essentially, what really happened at that school?

IRONSIDE: Well, what we know is that a civilian infrastructure, a United Nations school which was housing and sheltering over 800 civilians, was hit by some form of shelling or military targeting. Now, we don’t know yet who or how that came about. I believe that’s under investigation. But the point is that schools and places where civilians are congregating are meant to be protected. This is part of the sanctity of the protection of civilians, one of the basic humanitarian principles. And yet here we are with–and it’s not the first school that’s now been hit. In fact, it’s, I believe, the third or the fourth in just–within the week, in fact, that’s been subjected to firing.

DESVARIEUX: Yeah. And, I mean, as a UN representative, you do communicate with the Israeli military, is that right? You let them know the coordinates of these shelters?

IRONSIDE: That is correct. There is a coordination mechanism established between the United Nations and the Israeli military to inform them of all GPS coordinates for civilian installations, for UN installations as well. And my understanding was that was well coordinated multiple times for that particular location.

DESVARIEUX: Okay. We know that there–this is the fog of war. There are missiles that are being thrown on both sides. But let’s talk specifically about what you’re seeing there in Gaza, because Israel is saying that they’re just interested in getting rid of tunnels and these rocket fire sites. But what have you observed? You sort of talked about it a little bit, schools and hospitals. Can you tell us little bit more?

IRONSIDE: What I’m observing on the ground–and I have managed to get out into the field on a number of occasions over the last almost near three weeks now that this fighting has been raging on, and there are multiple damages to civilian infrastructure, such as major sewage pumping stations, sewage treatment plants, water wells. There’s over 24 or 23 medical facilities that have now been hit. A hundred and seventeen schools have also been hit, both UN schools and public schools. There’s over 3,000 homes that have now become entirely uninhabitable due to either being directly hit or within a radius of impact.

So what I’m saying is that there’s a huge impact on the civilian population and infrastructure that is meant to support the lives of civilians that is now completely upheaved. We’re seeing today UNRWA reporting that 159,000 people have gathered in their schools. I believe it’s within 117 of their schools across the Gaza Strip. This is in addition to people now gathering also in public schools or governmental schools. And people are also–of course, many more are seeking shelter with family members or relatives, or even neighbors. So, literally the entire population is upheaved and not one person is not impacted.

DESVARIEUX: Yeah. And, Pernille, I want to talk about the other side. Hamas is being accused of using Palestinians as human shields. What do you make that charge?

IRONSIDE: Gaza Strip is a very small piece of land. As a Canadian, I think in kilometers. It’s about 40 kilometers in length by maximum seven kilometers, seven to ten kilometers depending on location, around that. And it’s one of the most densely urban populated areas in the world. So, naturally, when you have a growing population that’s essentially been cooped up in here for well over seven years with the closure, but beyond that as well, there’s simply not enough space. So, inevitably there is a mixture of civilians and other kinds of activities.

Now, as part of the UN, we of course are advocating for the protection of civilians regardless of who’s jeopardizing their lives, whether it’s Hamas or Israel. And it is a priority that we maintain the civilian character of neighborhoods and highly, densely populated residential areas, schools, and all kinds of civilian infrastructure.

DESVARIEUX: Pernille, being that you’re on the ground, you work with a lot of children there with UNICEF, what kind of challenges are you facing as a humanitarian aid worker?

IRONSIDE: Well, our main challenge right now is having safe humanitarian access to the population in need. The shelling of the school, which was housing displaced persons yesterday, is just simply the latest example of how risky it is. I was at a different UNRWA school yesterday that happened to be hosting over 5,000 displaced persons. If that shelling had taken place there, we would have seen many, many, many more casualties. So it’s not having assurances that both as the United Nations we can move kind of securely in order to conduct our operations, deliver life-saving medical supplies, the hygiene kits that UNICEF is distributing to public schools, making sure that our psychosocial teams can reach out to those families who’ve experienced direct losses over the last few weeks. This is vital.

DESVARIEUX: Yeah. And I’m sure you’re ready for all this fighting to be over with. I mean, Hamas has said that they’re willing to accept a ceasefire if Israel ends the blockade. Why are they making such an issue of the blockade? Can you just describe the conditions that it’s like being there in Gaza, being that you live there? What is life like there under an Israeli siege, as some people have described it?

IRONSIDE: One really has to be here to fully understand the impact that being in such an enclosed and confining environment over years has on a people. There is no movement of people and goods in and out of Israel and Gaza between the two. There are some imports that are allowed in from Israel, but, for example, cement for construction materials is one of the commodities that is considered a dual-use and most of the time is not allowed in, except with very specific, kind of stringent requirements.

So there’s just simply not the freedoms that you and I would enjoy normally outside, or, frankly, anybody in this world, in terms of just having the opportunity. The unemployment rate before this escalation now was over 41 percent. And that does not include people who only work one hour per week. For people under 29 it’s 57 percent. So there is this lack of opportunity, practically a nonexistent economy, no jobs, no feeling for optimism in terms of one’s future. Those who go to University–and many, many do–are sitting at home and they’re idle. The electricity is usually around only–before the crisis, was of 18 hours a day, between 12 and 18 hours a day, depending on–. But now that’s gone down to a mere four hours a day. Already prior to this situation, water and fuel were extraordinarily in short supply. And so even the water system and the supply of water beneath Gaza is essentially going to run out by 2020, according to a UN report that’s been issued. So there are so many compounding factors, not to mention the fact that this is the third time in less than six years where there’s been a major military escalation. And from all the people I’ve spoken to, Palestinians in my team and around me, they’re saying that what they’re experiencing now is considerably worse than the previous two escalations that took place.

November 29, 2017
Sign Up for Our Newsletter
Help Us Make Real News!