There is no economic life in Gaza, there are limited options for young people and some of them are life threatening, says Pernille Ironside, Chief of Gaza Field Office, UNICEF

There is no economic life in Gaza, there are limited options for young people and some of them are life threatening, says Pernille Ironside, Chief of Gaza Field Office, UNICEF 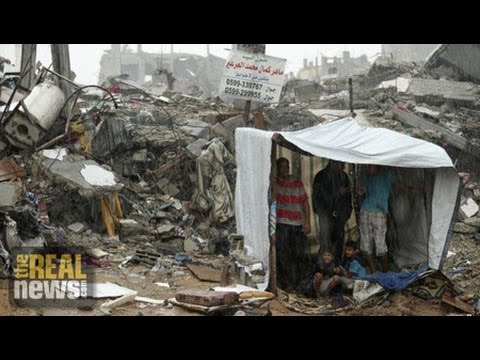 This is the second segment with Pernille Ironside. She is the chief of field office for UNICEF in Gaza. And we’re talking about the current situation–more precisely, the lack of progress in the development and reconstruction after the war this summer.

Thank you again for joining me, Pernille.

PERIES: So, Pernille, we’re seeing reports of flooding, dire wintry conditions, also a shut off of the electrical grid. Apparently, people are not receiving any electricity for up to 18 hours a day. What’s prompting these conditions?

IRONSIDE: Well, there’s been an energy crisis in Gaza since well before the war, actually. It’s just been significantly compounded by the conflict.

But, indeed, most Gazans don’t have electricity for more than 18 hours a day. And that makes day-to-day life extraordinarily hard, especially when there’s nothing protecting you from the elements, aside from plastic sheeting, in some cases, for those people who are living the remnants of their bombed-out homes.

Just last weekend there were over 100 families whose homes were flooded by the waters that came through. And all of their belongings are wet. You just can’t imagine. These homes are not insulated. There’s no firewood to speak of in Gaza. Even if there were, people don’t have any money to buy fuel. Cooking gas is pretty much impossible to find on the market as well, and it literally takes months to try and get your tank replenished. So people are cold. They’re using candles. There’s been children who–there’s been really sad fires that have taken place in families’ homes that have led to children’s deaths as a result. Four infants died of hypothermia in January related complications due to the cold. The conditions are absolutely appalling, and people are in survival mode.

PERIES: And in the earlier segment–and for those who didn’t see the earlier segment, you should go back and watch it–Pernille was talking about the situation for young people being fairly dismal and the economic situation–not having employment, not having anything to do. Describe for us what are the population we’re dealing with, and also what options or lack of options there are for them.

IRONSIDE: Well, we–in Gaza you have 1.8 million people living in one of the most densely populated areas of land in the world. It’s comparable to Singapore, Gaza, in terms of the population density within that. So people are living on top of each other, very crowded conditions, a lot of tensions and insecurity. Daily life is about navigating emotions of anxiety, fear, frustration, depression, anger for most young Gazans. They’ve got a lot of ideas, very creative, resourceful, educated. And yet no matter how hard they apply themselves, there’s a miniscule chance that their dreams and goals can be fulfilled, because of the context of Gaza under the closure. What that does to them–and to anyone, quite frankly–is it just creates a lot of pent-up emotion and feelings of desperation, hopelessness, helplessness.

What I see is really so much potential amongst young Gazans. And 70 percent of them are under age 30, and just about 52 percent are under 18. They’re children. So when you’re looking at the future stability of Gaza, you have to take into account the well-being of the children and the young people in society. They need to be supported in order for their dreams to have a chance of being kind of realized.

PERIES: So we have an education system that’s currently in dithers. So that’s not a solution. There’s a economic situation where there’s not enough–there’s almost no employment available for these young people. And in the earlier segment, you said this could lead to people either taking risks of jumping over the fence or taking off into the Mediterranean, hoping to get to the other side, which has proven to be really disastrous and dreadful for a lot of people who’ve died during that. And there’s the option of joining one of the militia groups.

Now, with these limitations, obviously, people are going to make some choices. And your job there, Pernille, is to really take care of the young ones. What are some of the recommendations you have that’s not being delivered on?

IRONSIDE: Well, UNICEF is working intensively with adolescents across Gaza. And we’ve got about 18,000 adolescents in one of our programs at the moment who are benefiting from everything from critical thinking skills to what we call social entrepreneurship opportunities, where they identify issues within their own community that they work on in groups and that add value to the community, and where they can be in turn valued for their contribution, positive kind of expressive arts, activities, as well as sports, a whole range of things.

But these need to be made available to, frankly, all children and adolescents across Gaza. Everybody needs some kind of a positive outlet in addition to improving the conditions at school. I mean, imagine going to school in Baltimore, and the maximum amount of time you spend in a classroom is at best four hours. You’ve got 50 kids to the classroom. It’s completely crowded. Kids are stressed because of their conditions at home. They’re falling behind in their studies. And yet they have a kind of a very compressed curriculum in order to pack in as much as possible before the next school shift starts in the afternoon.

I mean, the conditions are just designed to fail young people here. And that’s exactly what UNICEF is working very hard with partners, with local authorities, to try and create some positive outlets for kids through education, through out-of-school activities as well. And then, importantly, through the counseling that so many hundreds of thousands of children still need.

PERIES: And yet you’re still short of 70 percent of your budget.

IRONSIDE: Yes, yes, we are. We are short. We’ve only managed to raise 30 percent of what we need for Gaza.

PERIES: And so what’s next? What are the possible solutions that are in your foray? And is there any relief coming about in the near future?

IRONSIDE: Well, what’s next is that we do have, as it is, a lot of programs that are active, whether it’s in the water, in sanitation sector. You know, there’s 300,000 Gazans who still aren’t connected to the municipal water lines. So for them to get water on a daily basis, we try and help them with that to the nearest water points, and then also help them store the water at their homes. So making sure that the basic right of access to clean drinking water is attainable is something we’re prioritizing.

But we’re also continuing with programs that support the overall well-being of kids through the counseling, through remedial catch-up classes, so children who are having difficulty coping with the stressful conditions and the loss of loved ones actually manage, don’t fall further behind, which then spirals into more depression.

I met a mother of Ibrahim [spl?] about two days ago, where Ibrahim’s father was killed. He was an ambulance. His two uncles were also killed. The mother now spends whatever tiny little surplus of money that she has just on paying a tutor for Ibrahim so he doesn’t fall back/behind in his studies. Parents are acutely aware of the risks for their children, and they’re trying their best to support. It’s our job, as UNICEF and others, to provide that safety net for these kids so that they don’t lose hope and that they don’t literally slide over the edge.

PERIES: And the role of Israel in all this. Is there any follow-through on the commitments they made in terms of the peace agreement and assisting the reconstruction and development of Gazans?

IRONSIDE: Well, we’re all hoping that both parties–or, let’s say, all parties to the conflict, are able to come back to the negotiating table as soon as possible. It seems that it will–you know, Israel is in an election period and needs to see what the outcomes of that are. But at the same time, in the meantime, people in Gaza are–they don’t have any spare time to wait.

At the same time, the Palestinians, even within the government of national consensus, could do more as well. And it’s incumbent on all sides to do their utmost in order to address the conditions under which the ceasefire was signed so that it remains a permanent ceasefire and not a temporary one.

PERIES: And what can they be doing? Tell me.

PERIES: And what do they say about this? Why isn’t it being allocated?

IRONSIDE: Well, there is a political impasse in terms of the–I mean, there seems to be an overall financial crisis at the moment for the Palestinian Authority in terms of the withholding of the tax revenues that Israel collects on behalf of the Palestinians. That’s certainly having an impact. But in addition to that, there remain unresolved issues within the government of national consensus that are complicated and need to be worked through. And that requires political will.

PERIES: Pernille, thank you so much for joining us today and giving us the facts on the ground so well. And I hope you join us again very soon so that we can continue to give people an inside look at what’s happening there.

IRONSIDE: Thanks for covering the issues in Gaza. It’s important.