30 UN Agencies and International NGO's released a letter condemning the lack of reconstruction and development in Gaza after the war last summer. The pledges made in Cairo have not been received and there appears to be a tragic perpetual holding pattern when it comes to Gaza, says Pernille Ironside, Chief of Gaza Field Office, UNICEF

30 UN Agencies and International NGO's released a letter condemning the lack of reconstruction and development in Gaza after the war last summer. The pledges made in Cairo have not been received and there appears to be a tragic perpetual holding pattern when it comes to Gaza, says Pernille Ironside, Chief of Gaza Field Office, UNICEF 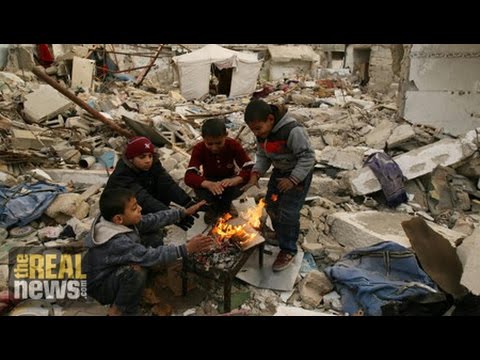 UN agencies and international NGOs operating in Gaza, 30 of them issued a letter, alarmed by the limited progress in rebuilding the lives of those who live in Gaza. And that is six months after the attacks they suffered last summer.

To quote the letter,

“The Israeli-imposed blockade continues, the political process, along with the economy, are paralyzed, and living conditions have worsened. Reconstruction and repairs to the tens of thousands of homes, hospitals, and schools damaged or destroyed in the fighting has been woefully slow. Sporadic rocket fire from Palestinian armed groups has resumed. Overall, the lack of progress has deepened levels of desperation and frustration among the population, more than two thirds of whom are Palestine refugees.”

Now joining me to discuss the lack of development and progress in Gaza is Pernille Ironside. She is the chief of the field office for UNICEF in Gaza.

Pernille, thanks so much for joining us again.

PERIES: So, Pernille, the situation has deteriorated dramatically. Approximately, I understand, almost 100,000 Palestinians remain displaced this winter, living in dire conditions. So describe for us what you are seeing on the ground.

IRONSIDE: Well, Sharmini, there is a dramatic deterioration, and people are in survival mode. I mean, just in January we had four infants who died of complications related to hypothermia because they’re too cold. All four of those infants belong to families whose homes had been destroyed and who are living in temporary shelters and kind of exposed to the elements.

Last week, over the weekend, actually, in the middle of the night there were another hundred families or so whose homes were inundated by the heavy rains and flooding that occurred in the middle area of Gaza. This is just compounding all of the desperate conditions that have arisen as a result of the conflict that was six months ago.

You know, I walk around and I talk to children and I’m meeting with their mothers, their fathers. And everywhere children go, there are reminders and dangers of the war that took place. Less than two weeks ago, there were three boys who found one of these terrible explosive remnants of war and took it home. And sure enough, it exploded, and they suffered really horrific shrapnel wounds as a result. Lucky they survived. But there is 8,000 of these unexploded ordinances that are littered around Gaza in the remnants of people’s homes, in play areas, in all kinds of public spaces where children go.

PERIES: Are there any effort to clean that up going on?

IRONSIDE: There is a tremendous amount of effort going into the cleanup of explosive remnants of war. But there’s just so many. But there’s a whole team of mine action experts who are working with a trained team of professionals in the local police who are doing this.

And UNICEF is also, together with our partners, carrying out a lot of awareness-raising at the community level, within schools as well, to warn children of the dangers.

But there are heaps of rubble everywhere. The clearance of rubble is–it’s a very time-consuming and painstaking process, because they have to sift through it to make sure there aren’t any explosives. And sometimes kids just naturally pick up things as well.

That’s just the tip of the iceberg. I mean, there’s [crosstalk]

PERIES: I understand. Pernille, what is actually preventing the progress, as far as reconstruction and development, at this time?

IRONSIDE: Well, there’s a number of factors at play here. I’d say foremost is the need for additional resources to support the agencies who are responsible for the reconstruction.

And here there’s two particular UN agencies who are leading on this work. It’s UNRWA, which is supporting refugees with the reconstruction of their homes and the provision of these kind of rental packages. And then there’s also the UN development program that’s supporting non refugees with essentially the same. And neither of them–well, they don’t have the funds to continue the programs. I mean, UNRWA has announced that it’s essentially broke.

And it’s not just on shelter issues that there’s a need for resources–I mean even UNICEF, where we have a 70 percent funding gap in terms of what we need for our scale-up program in Gaza. So it’s across the board. This is a fundamental gap. The pledges that were made in Cairo four months ago need to be–the donor community needs to make good on those pledges, essentially, in order for us to really see tangible results on the ground.

PERIES: And is there any effort going on in order to make sure that those pledges come in?

IRONSIDE: There is, certainly. Many efforts. A lot of outreach to donors. Some of them have come to Gaza.

But the tragedy of Gaza is that there is this perpetual holding pattern of wait and see, wait and see. And then, in the end, not as much gets done as was intended. You could say the–.

PERIES: So, Pernille, let’s name them. Who pledged money, and how much, and what has not been delivered?

IRONSIDE: Well, I mean, the full list of donors is available on the internet.

I wasn’t at the Cairo conference, but I do know that there were significant pledges from donors in the Middle East, as well as in European capitals and elsewhere, and they–.

PERIES: From what I understand, in Arab countries like Saudi Arabia, Qatar, the United States, France, and others made millions of dollars of pledges. But none of it–or some of it has not delivered. Why do you think that is happening?

IRONSIDE: Well, there is–what I’m seeing in Gaza is that there is a kind of a growing state of insecurity. There are kind of indications and risks that the levels of desperation are increasing. And I think there’s a concern amongst everyone that there could be another conflict. So, in the mind of a donor, that might raise questions as to whether or not this is the time to invest in Gaza.

What I would say to that is that this is precisely the time to invest in Gaza, because there’s a very slippery slope for a lot of young Gazans and 70 percent of Gaza is below the age of 30. And unless they have real prospects of attainable, positive goals, there’s–more and more of them are going to be–find it attractive to try and hop the fence into Israel, get shot, possibly brave going into the Mediterranean on one of these rickety boats to Europe and drown, or join a local militia group. And that’s not good for Palestinians, specifically children, nor is it good for children in Israel.

PERIES: So, Pernille, in our next segment, let’s dig further into the kinds of blockades, as well as what’s preventing the progress of the reconstruction.