The refinery is set to shut down after an explosion that could have killed millions, but at Netroots Nation 2019, Philly Thrive member .O says it was already negatively impacting low-income Black people who live nearby

The refinery is set to shut down after an explosion that could have killed millions, but at Netroots Nation 2019, Philly Thrive member .O says it was already negatively impacting low-income Black people who live nearby 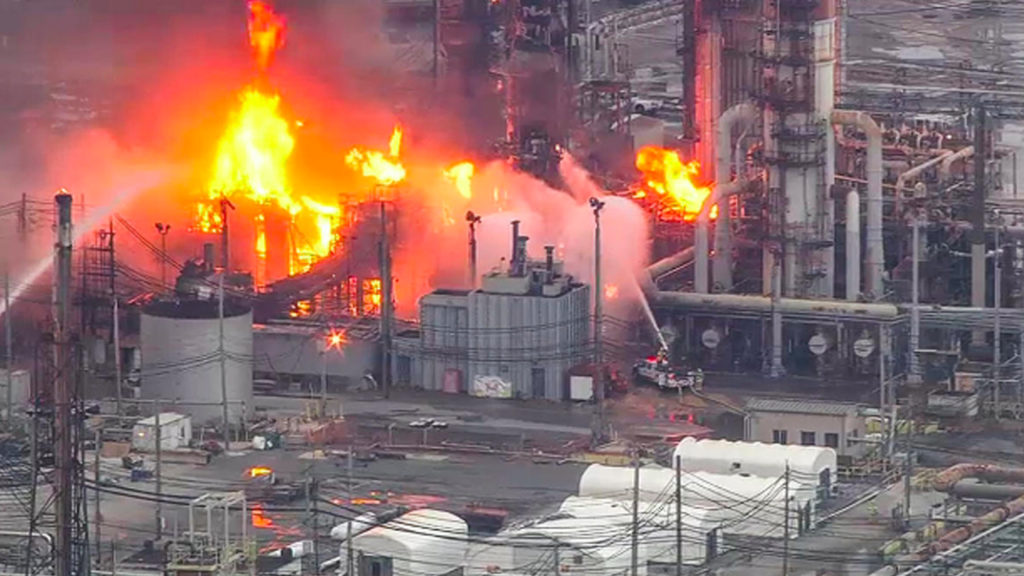 DHARNA NOOR: I’m here at Netroots Nation 2019. It bills itself as the largest gathering of progressives every year. And we’re here in Philadelphia where the conference is happening this year. But of course, there is some progressive work happening right here on the ground in Philadelphia–conference or not–every single day. And that’s why I’m here with .O, an organizer with Philly Thrive. Thank you for being here.

DHARNA NOOR: We’re here just a couple of weeks after an explosion. The largest oil refinery on the East Coast exploded. Where were you when that happened?

MS. .O: I was actually in Center City when it happened. However, a lot of our friends were in their bed and this explosion happened. And with the explosion, it literally rocked the very foundation of many of the community members.

DHARNA NOOR: Talk about the impact of that explosion. How dangerous was it, and how bad could it have been?

MS. .O: Actually, it literally could have killed millions of people. Literally. There were certain sets of chemicals that were on the grounds, that if the fire would have touched any part of that, literally millions would have died. However, let me say that this is an oil refinery that we have been clearly aware that has been killing people for a long time by invisible chemicals that you can’t see and sometimes you can’t even smell. However, there have also been times when the fumes have been so bad that people could barely breathe. And often, when we would say to the officials, “What is this smell? What is this,” they would basically say, “Well, it’s nothing. It’s not harmful.” And yet, that’s not our experience.

DHARNA NOOR: And of course, as we so often see, this refinery was not built in a white community, not built in a wealthy community. Talk about who’s most affected by those emissions and who would have been most impacted by an explosion if it killed millions of people.

MS. .O: Yes. Unfortunately, in a class society where we perceive white men at the top of the hierarchy and women of color at the bottom of that hierarchy, who lives in that community are black and brown people. And so, often, because we are perceived as the disposable people or we’re the ones who it’s OK to sacrifice us for the better good–but unfortunately, the better good usually is upper white people. And so, what we’re doing is we’re taking our power back. And how we’re taking our power back is actually by building relationship. We are building relationship across lines; economic lines, educational lines, religious lines. We are literally crossing lines so that we can stand in solidarity with each other for our right to breathe.

DHARNA NOOR: And that refinery was 150 years old. I believe the oldest oil well in America was actually in Pennsylvania. Talk about the long and deeply entrenched history of the fossil fuel industry in Pennsylvania and what folks like y’all at Philly thrive are doing to fight that.

MS. .O: It’s always about money. It’s always about money. And so, the challenge is that these are good paying jobs. Men, women who work in the industry are able to get health benefits–whatever that means in that kind of industry–health benefits, vacation, really well-paying jobs. And so, it’s challenging to shift that culture because in a win-lose paradigm, somebody is always going to lose. That’s a part of capitalism. That’s how they pit us against each other. And so, that’s been going on for over 200 years, being pitted against each other in order to save money at the expense of lives. And so, what we’re doing is we are saying that collectively, the workers, the community, the politicians need to work together in order to utilize our brilliance and have that brilliance so that we can dream into a world that is actually healthy for everyone, especially our children.

DHARNA NOOR: Obviously, fossil fuel lobbyists are strong in this state. We’re in Philadelphia, which is a blue dot in Pennsylvania, although obviously, members of both parties are subject to that; taking fossil fuel money and prioritizing those interests over other constituents. But what kind of state legislation and what kind of city legislation do you think needs to happen to combat this crisis?

MS. .O: We have a very strong conversation happening at this point in time around solar energy and creating a lot of movement in educating the community, going into the schools, working with STEM, saying that this is a viable time, a pivotal point of power for us to shift from fossil fuels, which is fracking and drilling and creating all manner of unnecessary stress on the planet, to really working with solar and wind, water, renewables. And so, there is a movement right now–an organization called Equate, Earth Quaker Action, 350.org. I mean, there are many organizations who are coming together to rally around and say obviously we cannot do this by ourselves. We have to work together as a collective.