Reactions to the first Presidential debate 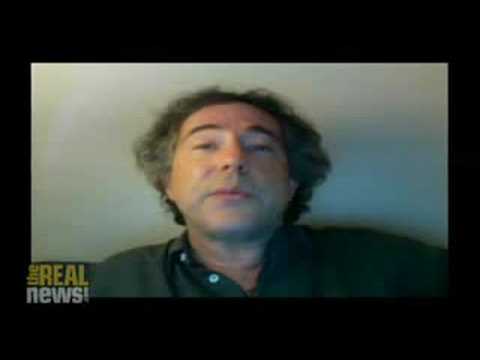 PAUL JAY, SENIOR EDITOR: A few minutes ago the debate between Barack Obama and John McCain ended. They debated finance; they debated US foreign policy. From a personal point of view, I’m not quite sure what kind of debate it really was. But maybe to give us more insight will be Pepe Escobar, who’s joining us from Brasilia, the capital of Brazil. Pepe, what did you make of this debate?

PEPE ESCOBAR, SENIOR ANALYST: Well, the first [inaudible] the first half an hour you could really fall asleep, because they were talking about what was happening with Wall Street and US economy. But, in fact, most of it they didn’t have a clue. They didn’t even know how their position vis-à-vis the bailout [sic]. Jim Lehrer asked five times, each of them, what is their position regarding the bailout. No answer.

JAY: Yeah, I agree with you. It was very strange. There was no sense of urgency. We’re in a period of one of the great financial crises of our time, and it’s almost like we’re two months ago in the campaign, and each of them are saying the same things they were a month ago.

ESCOBAR: The same thing. And, you know, both of them, they seem to be on Valium. Both of them. And they were basically rehashing what they have been saying in their stump speeches for the past six months.

JAY: But where was Obama?

ESCOBAR: I’ll give you some examples. Obama was talking about his tax plan. Ninety-five percent of Americans won’t pay more taxes, and only people who make more than $250,000 a year will have a tax increase. And then McCain says—he starts accusing Obama of pork-barreling. Then Obama is giving a very detailed, you know, explanation about rebuilding US infrastructure. McCain’s response: Obama’s far away to the left in the Senate; he cannot reach across the aisle. So this was the essence of McCain. He had that smirk, that sneer. You know, he looked like Johnny Rotten in the Sex Pistols in punk in England in the mid-’70s. It was ridiculous. The attitude that he conveyed was that, you know, "I am John McCain. I’ve been all over the world. I know everything. I know the leaders. I’ve been to Waziristan. I said that the surge was going to work. And who is this guy to debate me?" So he was condescending. He was, I would say from a personal point of view, repulsive.

JAY: But on a purely emotional, visceral level, if you try to put yourself in the position of a viewer who’s not that informed on these issues, who do you think won this?

ESCOBAR: It’s hard to tell. If you are a progressive independent in the eastern seaboard or in California and in Oregon, you would say that Obama won. If you are a conservative independent or even an evangelical that doesn’t trust McCain a lot, but he also doesn’t trust Obama, you know, in northern Arkansas, South Dakota, you know, in the industrial Rust Belt in Ohio/Pennsylvania, probably they would say that McCain won because he projected aggressiveness. He was on the offense most of the time; Obama was on the defense. He said many times, "I agree with John," which is completely absurd. You know, McCain got away with outrageous stuff, not to mention—.

ESCOBAR: Okay. Let me get my notes. Ah, yes. Obama was going on a very detailed explanation of the explanation between the US and the Musharraf government. McCain says that Pakistan was a failed state. Even Musharraf came to power [sic]. This is ridiculous. Pakistan became a failed state after Musharraf got to power, and especially after Musharraf didn’t know what to do. This is just one example of foreign policy. About Iraq he said that we are winning in Iraq. We could go on for this forever. And Obama, he never challenged McCain.

JAY: He won’t take him on on the surge thesis [inaudible]

ESCOBAR: [inaudible] is that he won’t take him on on issues. And when McCain came with the neocon roll call, you know, "We cannot sit down with the [stammers] Ahmadinejad [inaudible]" [inaudible] couldn’t pronounce his name. And he couldn’t even pronounce the name of the Pakistani president. He said he was "Kardari." Zardari was "Kardari." So this is Sarah Palin stuff. It’s not exactly McCain, who poses as a foreign policy expert. So when he started the laundry list of neocon points, you know, Obama didn’t take him on. It’s completely crazy. Look, the only thing that he took him on was about sitting down with the leadership of Iran to talk about it. And Obama explained, "Look,"—and it’s not [stammers] Ahmadinejad. The person that really controls foreign policy, the army, the press, the judiciary in Iran is the supreme leader. So, you know, this, a little bit of foreign policy lesson for McCain. But Obama had so many chances, and he squandered [them]. You know, he had a little jab here and there, but on points, I think he even lost on points.

JAY: Yeah. I had the same impression. I also was quite taken in near the very end, where Obama said the fundamental problem with the Iraq War, when he says it in a colloquial way, he says it’s "We took our eye off the ball," which seems to me there’s this great more loss than was at stake in Iraq than just taking your eye off the ball [sic]. But he also buys into something. He says the real problem it is weakened our ability to project US military power. And if you buy into that concept, you’re playing on McCain’s ground.

ESCOBAR: You’re playing on McCain’s ground, and you subject all your analysis, even if Obama’s analysts’ conception is much more sophisticated, it’s still conditioned by the framework of the war on terror. Still. And what’s the problem with Obama? Because he’s being, you know, coached by Brzezinski, by Richard Holbrooke, by Madeleine Albright, who are humanitarian imperialists. But they are also, you know, war on terror on the side as well. Why not? And it’s the same thing as the latest book published by Brent Scowcroft and Zbigniew Brzezinski side by side. If you read the book, it’s amazing. They still believe that America has the moral superiority and the manifest destiny to be the leader of the whole world. This is completely crazy. Obama could say, "Look, now we are one more player among others. This is now a multi-polar world." You know, it’s not only because of Iraq and Afghanistan or because of the disaster of the Bush administration; it’s because of the economic crisis as well.

JAY: And McCain’s whole thesis on league of democracies, Barack didn’t talk about it.

ESCOBAR: Exactly. Which means expelling Russia from the G8 or bypassing Russia because Russia is part of the Security Council.

ESCOBAR: Exactly. Bypassing the United Nations. Exactly. And the league of democracy idea, we cannot forget that this is Randy Scheunemann’s idea. This is what Scheunemann has been saying for the past—.

JAY: Scheunemann is McCain’s advisor, who was a lobbyist for Georgia and one of the authors of the Project for a New American Century, the Bible of the neocons. I mean, all of this is meat that one would have thought could have been chewed up by Obama, but we didn’t see any chewing. So, at any rate, if Obama were to call you in the next day or two and say, "Pepe, what should I do in the next debate?" What would you say to him?

ESCOBAR: Go on the offense. Be Muhammad Ali. Today he was like—I don’t know who. You know those guys that Cassius Clay used to defeat in the Olympics in the early ’60s? He behaved like one of these guys. He was not Muhammad Ali. He was not on the offense. And this thing, "John, you’re right," this is completely absurd, because he was treated by McCain as a non-being almost. It was appalling to see it, the sneer and the smirks all the time. This was, you know, for a foreign observer and for independent outside observers, this was really, really too much.

JAY: Thank you for joining us tonight, Pepe, and we’ll do it again, I guess, with the vice presidential debate coming up soon. That should be rather entertaining.

ESCOBAR: I’m dying to see Sarah Palin from my house.