On the road in Bolivia

From his recent trip, Pepe Escobar on La Paz: Showdown between Morales and the elite state governors

From his recent trip, Pepe Escobar on La Paz: Showdown between Morales and the elite state governors 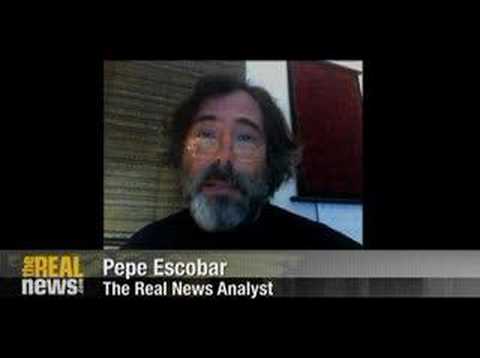 PEPE ESCOBAR, THE REAL NEWS ANALYST: When I went to La Paz, ground zero of Bolivia, the whole thing was exploding, because since the beginning of January, Evo was meeting with the mayors not only of the Media Luna, all the mayors of the big provinces, the nine big provinces in Bolivia, to discuss what to do next, after the voting of the Constitution by the constituent assembly. The mayors say that the whole thing is illegal. And they especially don’t want that the hydrocarbon tax, the profits from the hydrocarbon tax, be deviated to pay for a new bonus for over sixty year olds in Bolivia. It’s called the dignity bonus. They spent basically the whole month of January discussing it at the Palacio Quemado, the Burned Palace, which is the seat of the government in La Paz. Evo was proposing all sorts of, you know, recommendations, dialog, you know, side measures, and the mayors were inflexible. So it came to a head at the end of January, actually. The government decided by itself to start distributing the dignity bonus, which is not much in western terms. It’s $30 a month, roughly, and for some other people $20 a month. And when the distribution of the bonus, which can be collected on a monthly or on a yearly basis, reaches the Media Luna, the government can say, “Look, these mayors of these provinces don’t want to pay you what you’re entitled to by law, by the government.” So Evo’s government decided to advance the confrontation, which is the only way. In fact, one of Evo’s ministers told me that the vice president, which is also [inaudible] negotiations, Álvaro García Linera, a brilliant Marxist intellectual, he’s too much of an intellectual. He should be more forceful and tell the mayors, “Look, we are going after you, and we’re going to force you to pay this, because, after all, this has been passed by law.” So the confrontation in the country is absolutely visible. I crossed from Argentina by bus, and I made my way towards La Paz via the Media Luna, and you can see the divide. As you cross from, let’s say, the eastern lowlands to the Altiplano, it’s visible. The thing is, 65 percent of Bolivia is indigenous populations. Roughly 20 percent are Mestizos, and there are only 15 percent whites. And of those 15 percent whites there’s a sizable middle class, which is being court(ed) by the MAS, the Movement Towards Socialism, Evo Morales’ party. And there is an extremely significant, because very wealthy, extreme right concentrated especially in Santa Cruz, in parts of Cochabamba (because the mayor of Cochabamba is also extreme right wing), and the provinces of Beni and Pando more to the north of Bolivia. This has all been very well concerted with the US embassy in La Paz. So you see the US embassy in La Paz and these land-owning, massive land-owning interests in the Media Luna allied against a government that is truly representative—still Evo’s popularity hovers around 60 percent. And if people went to the polls in a referendum, which was proposed by Evo himself, on his government and all the different mayors, everybody would put their jobs on the line, I’m sure the government would win, and the government knows they would. But they want to discuss. It’s a case of separatism instilled and instigated by the US embassy in La Paz of course. And that’s what the major land-owning interests in the eastern lowlands want as well. But can you imagine if this was in China? If it was in China, with the Tibetans in China or people in Xinjiang, the Uyghurs in Xinjiang, how they would be repressed by the central government, as they are as we speak. In Bolivia, Evo’s government’s trying to do this via dialog and consultation, but it’s inevitable. During 2008, the confrontation will come to its apex. It’s going to be a very, very difficult year for Bolivia. And this is happening in the middle of one of the most far-reaching social revolutions in modern era in the developing world. It’s being observed by many people in South America, populations if not by their governments, with extreme interest, and is also rising extreme interest in the West, in the US and Canada, and western Europe as well. What President [sic] Álvaro García Linera, how he describes the process, he describes it as a social revolution but also as a cultural revolution as well. And especially Evo and Álvaro García Linera described it as a decolonization process. If you go to the mines of Potosi, you understand how, and you understand how this government decolonization is at least 300 years late, if not 400 years late. It’s happening right now. But the Washington consensus and the comprador elites of Bolivia, which are no better, no worse, or as bad as any comprador elites in South America—or in the developing world, for that matter—they will fight very, very hard against it.