The rise of neo-fascism in Bolivia

Pepe Escobar in Sucre: "bastion of the extreme right"

Pepe Escobar in Sucre: "bastion of the extreme right" 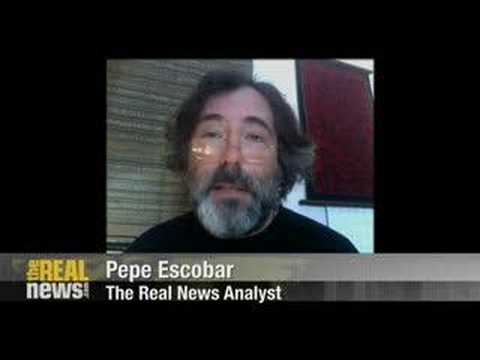 PEPE ESCOBAR, THE REAL NEWS ANALYST: When I went to Sucre, the former colonial capital, where the independence of Bolivia was proclaimed in 1825, I saw something absolutely startling. It was basically an operation of mass coercion. Sucre is one of the bastions of the extreme right in Bolivia. They are totally against Evo’s policies, social redistribution, and what the government in La Paz dubs, in my view correctly, a cultural revolution in Bolivia. There were a lot of people in front of the mayor’s office in Sucre. They were signing with their thumbs in red ink—which reminded me of the election in Iraq, the famous purple ink in the elections in Iraq—they were signing something they didn’t know what they were signing. I talked to some of the indigenous people. Some only spoke Aymara or Quechua; they didn’t speak Spanish. And they didn’t know what they were signing. In fact, they were signing—these people were basically illiterate. They were signing two petitions. One to counter the new constitution, which was voted in Sucre and Oruro, without even reading the text. They didn’t know what was altered in terms of the already very, very progressive constitution that Bolivia has. And they were also voting for what people in Sucre, the Sucrenos, called Capital Idad, which means, “Sucre as the full capital of the country.” Sucre’s is the seat of judiciary, still, in Bolivia, and the executive and legislative sit in La Paz. And Sucre wants the whole thing. For what? For nothing, because basically they still think they are in the early 19th century. They still think because the independence of Bolivia was proclaimed in Sucre, Sucre has the rights to be the capital. This is completely absurd. When you are in Sucre, you feel that you are Spain. It doesn’t look like Bolivia. It’s a immaculately preserved Spanish colonial town. It’s called the White City of the Americas, la ciudad blanca. And it’s basically extreme, extreme right wing with a very worrying phenomenon as well: there’s a growing movement of, I would call, a neo-fascist youth movement, which are completely against indigenous people—the only indigenous people that you’ll see in Sucre city itself are begging in the streets—and, of course, against the government, against Evo. And they dub everybody from indigenous movements, indigenous populations, as well as people who are living in La Paz, which is a bastion of support for the government, as “aborto de llama” you know, llama abortions. It’s very, very heavy. We can assume that around 2008, 2009, the violence against indigenous people, even on a micro level, will increase. And it’s like in Santa Cruz. Santa Cruz is the main city in the eastern lowlands. Thirty percent of these lowlands are in fact owned by major international agribusiness interests, especially Brazilian, but also American, and some Spanish as well. And these mayors in the Media Luna, in the eastern lowlands, are the opposition, the main opposition, against the policies of social redistribution of Evo Morales.