Is Betancourt release the end of FARC?

The recent liberation of Ingrid Betancourt and other hostages from the FARC rebels in Colombia seems to put President Alvaro Uribe in the driver's seat. Does this mean that the FARC can be wiped out militarily or is this a good time to negotiate a peaceful settlement after decades of civil war. The Real News Network Analyst Pepe Escobar talks to author and historian Forrest Hylton.

The recent liberation of Ingrid Betancourt and other hostages from the FARC rebels in Colombia seems to put President Alvaro Uribe in the driver's seat. Does this mean that the FARC can be wiped out militarily or is this a good time to negotiate a peaceful settlement after decades of civil war. The Real News Network Analyst Pepe Escobar talks to author and historian Forrest Hylton. 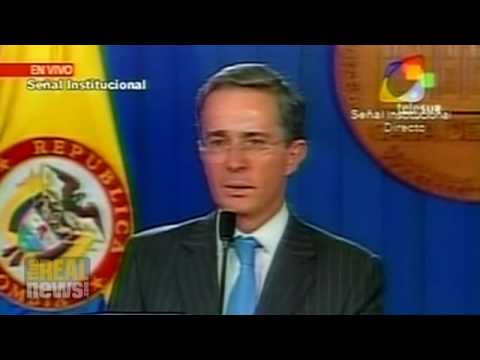 PEPE ESCOBAR, ANALYST, THE REAL NEWS NETWORK: Álvaro Uribe’s the most popular man in Colombia at the moment because he pulled off something that very few people can: he liberated hostages without apparently firing a shot. All the hostages are safe and sound, including Ingrid Betancourt back in France. John McCain happened to be there just one day before this whole thing happened. He was not there for the photo op with Álvaro Uribe, but McCain could even maybe hire Álvaro Uribe to be his vice president if he wanted to. That was perfectly executed. Forrest Hylton is with me, and he’s going to deconstruct what really happened in Colombia. Forrest, what is this? McCain goes to Colombia, and the next day they pull off an Israeli-style, spectacular hostage situation. What really happened?

FORREST HYLTON, AUTHOR, "REVOLUTIONARY HORIZONS": It’s impossible to know. As usual, there is a lack of transparency about how it all really went down. So, you know, it’s hard to say when we’ll even be able to find out. But one thing is for sure: this represents the most important victory in Álvaro Uribe’s presidency, and it represents the most important victory the Colombian armed forces have ever had against the FARC.

ESCOBAR: So the FARC are over? Done with?

HYLTON: Well, you know, that’s being posed as a military question: you know, is this kind of the end of the end militarily for the FARC? But really it’s a political question, because the only way the FARC are going to be over is through a process of political negotiations, which is going to involve some give and take on both sides. The Colombian government’s now got the upper hand in order to pursue negotiations from a position of strength. The FARC would certainly be in a position of weakness.

ESCOBAR: Uribe’s position, military option, was vindicated with this hostage rescue. Now he’s not very much inclined to negotiate, I think.

HYLTON: That appears to be the case. I mean, there’s going to be a lot of people arguing right now that the FARC are on their last legs and the thing to do is finish them off militarily. But because of the cocaine business, rump groups of the FARC would be able to survive indefinitely on the basis of money from the cocaine trade. So militarily eradicating them once and for all is really not a practical solution. However, a negotiated political solution, given the Colombian government’s evident strength, would probably be the way to go. That would be the only way to actually end the FARC. So it’s a political question more than a military one.

ESCOBAR: Forrest, can you make a direct connection between the killing of Raúl Reyes, the number two of FARC, and this spectacular hostage operation?

HYLTON: Well, according to the French foreign minister, the day that Raúl Reyes was assassinated, on March 1, the French government was set to meet with him to finalize the details for the liberation of these hostages. That means Ingrid Betancourt, the three North Americans, and some of the military and police people. So this is an initiative that’s actually been in the works for months. Now, had they not killed Raúl Reyes, it’s very likely that those hostages would have been released in Ecuador, and all the political credit would have gone to the Ecuadorian government and the Venezuelan government. The way it’s worked out now, all the credit goes to the Colombian government, particularly the Colombian armed forces, who obviously have a lot to account for, having invaded Ecuador and violated its sovereignty.

ESCOBAR: We should talk about the invisible credit in this whole operation, which is the United States military, in terms of communications, logistical support. The Colombians by themselves could never have pulled that off.

HYLTON: No, just as they couldn’t have pulled off the killing of Raúl Reyes on March 1. Ambassador Brownfield said in a press conference that he was very proud of the Colombian armed forces, that they had undertaken this operation all on their own. But, of course, the United States have been very pleased to provide the help that Colombia asked for, and we can assume that help was basically sort of communications, satellite technology, and so forth, the same type of help that was evidently used in the attack on Raúl Reyes. So the US government is able to assist the Colombian government in operations that are essentially initiated and carried out by the Colombian government itself, which was the whole idea behind Plan Colombia and then, later, Plan Patriota.

ESCOBAR: Absolutely. So this is the South American version of war on terror, and apparently it’s working as far as Colombia’s concerned.

HYLTON: Absolutely. The spin on it now is that this is a tremendous success. It’s ironic, because the initial goals of Plan Colombia were to reduce coca production by 50 percent. And, in fact, coca production, according to the United Nations data for 2007, is up 27 percent over 2006. So coca production in Colombia is now at near-record levels. Plan Colombia has done absolutely nothing to stop the spread of narcotraffic. It has, however, debilitated the FARC by folding the war on drugs into the war on terror. So one could argue that Plan Colombia, Plan Patriota was never really about stemming the flow of cocaine to the United States: it was all about defeating the FARC militarily. And now the ball is really in the court of the South American countries that have been advocating a diplomatic solution. It looks as though Álvaro Uribe has the upper hand. He’ll be arguing for a military solution. This is obviously the preferred solution of McCain and Bush and, for all I know, Obama. The people pushing for a political solution now, which is to say Hugo Chavez, Rafael Correa, Lula in Brazil, they’re really on the defensive to some degree, and they’re going to have to persuade both the FARC and Uribe that the best thing to do is to sit down and negotiate this in order to facilitate the union of South America.

ESCOBAR: To wrap it up, what was John McCain really doing in Colombia one day before they pull off this operation? Obviously, US government knew about it. John McCain knew about it. And the Colombians were, let’s say, sophisticated enough not to have John McCain for a photo op.

HYLTON: Well, what’s interesting is that he’s visiting Colombia and Mexico. So this operation essentially ratifies before the television cameras the success of Plan Colombia, coca production be damned. And then McCain goes, I believe about midday yesterday, to Mexico, where Plan Merida has just been approved—we’re talking $500 million worth of military aid to the Mexican government in order to fight the war on drugs. So what you have is the pitching of Plan Colombia as an enormous success that needs to be replicated elsewhere in the hemisphere, particularly Mexico, where McCain went right after Colombia. So you could say that the circle was squared very nicely.

ESCOBAR: Will US public opinion bite?

HYLTON: It’s very hard to know to what extent US public opinion pays attention to stories that occur outside the United States, even Iraq and Afghanistan. But this appears to have put Colombia on the map of the world’s media, at least for, you know, the current news cycle.