Does it matter who will win the Afghan presidential election - Hamid Karzai or Abdullah Abdullah? Not that much, as this was an election to legitimize the US and NATO occupation of parts of the country not controlled by the Taliban. But in terms of the New Great Game in Eurasia, as Pepe Escobar argues, that's when the grand American strategy can be perceived in full bloom : it involves nothing less than rehabilitating the "evil" Taliban. Anything goes when it comes to Washington trying to establish an energy corridor from the Caspian to South Asia, bypassing Russia.

Does it matter who will win the Afghan presidential election - Hamid Karzai or Abdullah Abdullah? Not that much, as this was an election to legitimize the US and NATO occupation of parts of the country not controlled by the Taliban. But in terms of the New Great Game in Eurasia, as Pepe Escobar argues, that's when the grand American strategy can be perceived in full bloom : it involves nothing less than rehabilitating the "evil" Taliban. Anything goes when it comes to Washington trying to establish an energy corridor from the Caspian to South Asia, bypassing Russia. 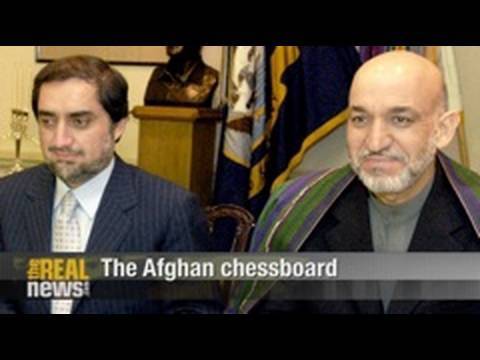 PEPE ESCOBAR, THE REAL NEWS ANALYST: Hamid Karzai and Abdullah Abdullah are virtually neck and neck with only 10 percent of ballots counted in the Afghan election. Well, that’s not exactly what Western public opinion was being led to believe only a few days ago by organizations such as the International Republican Institute—very few voters, wild allegations of ballot-stuffing, drug money, buying votes, you name it. Does it matter? Not much. This was an election sponsored by Washington to legitimize the US occupation of, well, less than half of Afghanistan, because the Taliban control most of it. What really matters is that US and world public opinion still don’t know what Obama’s Afghanistan—or, rather, AfPak policy—is all about, apart from Washington voting against Hamid Karzai. Maybe Obama will spell out the endgame before the end of 2009. Maybe he won’t. So let’s take a look at the facts on the ground, starting with Obama’s super-AfPak envoy, Richard Holbrooke. Remember the good old pre-Obama global war on terror, GWOT? The rationale for the Afghan chapter of GWOT was to get Osama bin Laden. Now, under Obama, it’s [inaudible] Pashtun peasants to rebuild Afghanistan for the benefit of Pakistani businesses. That’s exactly what Holbrooke told people in Karachi in Pakistan before the Afghan elections, but after he had told Americans in Washington that the Afghan mission is, well, to rebuild Afghanistan with the precious help of drones, military bases, and bombing of Pashtun weddings, of course.

RICHARD HOLBROOKE, US SPECIAL ENVOY FOR AFGHANISTAN AND PAKISTAN: But I would say this about defining success in Afghanistan and Pakistan—in the simplest sense, the Supreme Court test for another issue: we’ll know it when we see it.

ESCOBAR: In Pakistan, Holbrooke met with friends of the Taliban such as ["moo-LA-na-faz-LOO-ra-MAN"] and ["ka-zee-hoo-SANE-HA-mat"], and this while the US supreme commander in Afghanistan, General Stanley McChrystal, met Pakistani army chief General Kayani. So what does that tell us? It tells us that the real future of Afghanistan is decided in Pakistan. Talk about an AfPak symbiosis. The Pentagon has got it right, at least this one. India is not very happy with it. Neither is Iran. Tehran believes that Washington is rigging the Afghan election to install its own new puppet, Abdullah Abdullah, and get rid of Karzai. Karzai, for his part, knows he needs the warlords; otherwise he’s toast. That’s how the power-play works in Afghanistan. Iran supports the Karzai warlords’ alliance as the only way to keep Afghanistan from falling apart. They know that they are talking about it. This is all about clan, tribe, and very rigid definitions of status. Afghanistan used to be a [centerpiece] of the Persian Empire. Besides, Tehran has a very good relationship with former mujahideen such as Ismail Khan, Mohammed Fahim, Karim Khalili, Mohammad Mohaqiq, and Rashid Dostum the Uzbek. Yes, once again this is a proxy war between the US and Iran. So no wonder Washington is fuming. Suppose Karzai wins in the first round. Obama, super-envoy Holbrooke, Pakistan, they all lose badly. Iran wins. If there’s a runoff, all hell will break loose. Nobody wants that. But is there a chance of Abdullah Abdullah, Washington’s new man, pulling a Mousavi-in-Iran and contesting the election results? Not really, even though the temptation is huge.

DR. ABDULLAH ABDULLAH, AFGHAN PRESIDENTIAL CANDIDATE: The elections went quite well as far as I am concerned.

ESCOBAR: So on one side we have Karzai and the warlords; on the other side, we have the US-Saudi-Pakistani alliance, whose goal is to get who? Yes, the Taliban into power, just like it’s 1996 all over again. So imagine the ISI, the Pakistani CIA, having to live with an Afghan government winning an election sponsored by Washington and infested by warlords who used to do very good business with Iran and Russia, not to mention India. Not to mention as well that this will break up a lot of Western hearts and dreams, would make it very hard for the US to use radical Islam as a Trojan horse to destabilize Central Asia. It would smash the expansion of NATO into Afghanistan, and it would make it very hard to keep all those US military bases, Bagram, the new Guantanamo, included. And that leads us to Obama’s Central Asia policy. Is there an Obama Central Asian policy? No mystery here. It’s to fight Russia on all fronts. So if Afghanistan turns sour, expect an American offensive in Uzbekistan. Why? Well, Uzbekistan depends on NATO to be a buffer between the country and the Taliban in northern Afghanistan. The Germans are fighting the Taliban in northern Afghanistan. The Islamic Movement of Uzbekistan, IMU, is allied with the Taliban, and the Uzbeks, they want no trouble with the Taliban. The Uzbeks, they also do not trust Russia, because Russia supports their neighbor Tajikistan in an absolutely crucial gambit in the Central Asian ‘Stans, a hot water war, as in how to share the waters of the Pamir glaciers. So Uzbekistan, they want some kind of deal with the Taliban not only as a way to marginalize Russia but as a way to enhance their own regional status. Bottom line: whoever wins the Afghan elections, what Washington really wants is most of all to rehabilitate the Taliban, have them share power in Kabul, and have [inaudible] Uzbeks. Washington and Obama can then pose as a pacifier power in Central and South Asia—to the delight of crucial ally Pakistan, of course. This is how the new great game is played in Central and South Asia. For Washington what matters is an energy transit corridor from Georgia and Azerbaijan via Turkmenistan and Uzbekistan to Afghanistan and then Pakistan, the whole thing, of course, bypassing Russia. Isn’t it wonderful if this Afghan election ends up leading Americans, and Westerners in general, to discover that the Taliban after all were not that evil? Of course not. The Clinton bunch was happily doing deals with them in the late 1990s. Super-envoy Holbrooke, after all, was just fanning the flames of an old and torrid love affair.