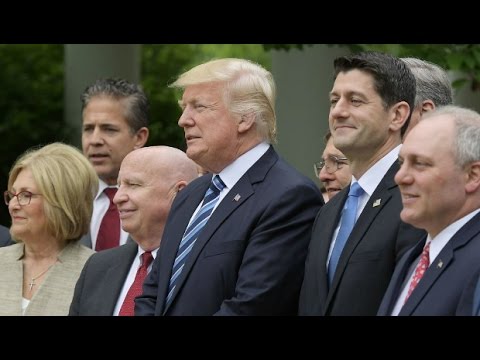 Aaron Maté: It’s The Real News. I’m Aaron Mate. We continue to look at the fallout from the House Republican passage of the American Healthcare Act, which if enacted would repeal the major parts of Obamacare. Joining us is Patty Eakins, who is President of the Pennsylvania Association of Staff Nurses and Allied Professionals. Patty, welcome.

Aaron Maté: So some studies that I’ve seen estimate that the reduction in health care spending under this measure is $1 trillion, most of which goes to helping low income people pay for their healthcare. What do you see as the major impacts of this vote if it manages to become law?

Patricia Eakins: I think there are a lot of major impacts for this bill. One of them as you said is that people on the Medicaid expansion, and those are the folks who are the working poor, the people who have the low wage jobs at McDonald’s, or maybe at the airport, or some other low wage job who really can’t afford health insurance. These are the people who, like 1.4 million of them across the country, have been able to get health insurance, and many of them are going to lose it. In fact, the entire project could lose up to 24 million people completely who will not have any health insurance. The Affordable Care Act really took care of about 40 million people, brought them back onto health insurance. Without a revenue stream that’s dependable, hospitals are going to probably close or cut services because these patients will come to the hospital anyway, and the hospitals will start feeling the pinch of low reimbursements again. They will start having layoffs and services will be cut back, and it will be really bad for patients and for the workers.

Aaron Maté: Yeah, I imagine especially that hospitals that serve low income patients are going to be even more squeezed because they’re going to have less resources, and then way more people to deal with.

Patricia Eakins: That’s absolutely right. Safety net hospitals in the inner cities are going be hit hard, but so are many of the rural hospitals all across the country. Many of them, particularly in a state like Pennsylvania, many of those hospitals are the biggest employer, and they have very razor thin profit margins. A lot of them are going to be at great risk. You can’t just run a hosp-, it’s not a charity. You can’t run a hospital without a dependable revenue stream, and having that yanked away from them is going to be very difficult. One of the things as nurses that we, as registered nurses, we fight for all the time is to have adequate staffing in the hospital so that you have safe patient care. If nurses have too many patients to take care of they aren’t in the room when something’s going bad with a patient, or when the patient needs pain medicine, or something else. So we find, we believe that this is going to be really bad for staffing as well. Hospitals are going to say well we can’t afford this, so they’re going to either lay off nurses aids, or possibly lay off registered nurses, or other kinds of healthcare workers. That will be bad for patients as well.

Aaron Maté: Let’s talk about preexisting conditions. Now under Obamacare insurers were barre from denying people coverage based on their medical history. This Republican measure now would roll that back, and it’s replacement is this concept of high-risk pools. Can you talk about what that would entail?

Patricia Eakins: States would be given the right to allow insurers in their state to get rid of, to not insure people who have preexisting conditions. It will be decided on a state by state basis. Most insurers, I would imagine, if they’re given that option they’re going to not insure people with preexisting conditions. So that’s, and that will be a double whammy for the older people. They say that, the statistic I read is that between, that 86% of the people between 50 and 65 already have a preexisting condition. As you know, older people are already going to be hammered by this new act that they passed because insurers will now be allowed to charge five times what they charge to people who are young and healthy. So, first you’re going to get charged a lot because you’re old, then you’re going to get charged even more because if you’re old you probably have a preexisting condition.

They’re going to put you, as you said, in these high-risk pools, but they’re not really funded. $8 billion for high-risk pools, it’s a drop in the bucket. It’s not going to work. Something, I read one thing, one source that said you need at least $160 billion, and maybe that’s not even enough. I mean the whole thing is so upside down because really what, they way insurance operated is the more people you have in, especially the more healthy people, the lower the premiums would be. So if you only have healthy people in, and you charge the people with preexisting conditions more, they won’t be able to afford it. It will be completely unaffordable, and those people will of course because they’re older and have preexisting conditions, they’ll land in the hospital anyway, and hospitals will have to take care of them.

Patricia Eakins: I think people are really frightened that they don’t know what it means. It’s caused, for months now we’ve had all this insecurity about what is going to be the ultimate outcome of this. Of course, we do believe that the Senate is not going to pass the bill in this same form, so we still don’t know what form all this is going to end up as. The Senate has indicated that they want to start with their own bill. So we just don’t know. What we’re asking people to do, and what we’re doing as a union, is we are now shifting our pressure from Congress people and trying to get them to vote the right way, we’re now shifting our pressures onto the Senators and encouraging them, pressuring them to do the right thing. I mean look, the promise came that we were going to have a better Affordable Care Act, and instead that promise has been violated and they’ve made it worse.

Let me just add to that the way that the Affordable Care Act funded low income people was by a tax on the wealthy, a tax on their investments plus a tax on their high income. So, this bill also just gets rid of all that money. So it’s basically a huge, huge windfall for the top 1%, are going to get billions of dollars that formally helped take care of people.

Aaron Maté: Yeah, in fact I saw one analyst say that this bill could mark the single biggest transfer of wealth from the poor to the rich in U.S. history. Patty Eakins of the Pennsylvania Association of Staff Nurses and Allied Professionals, thanks so much for joining us.

Patricia Eakin has been a registered nurse for 40 years. For her entire career she has worked at the bedside as a direct care RN. She is Certified Emergency Nurse and spent the last 17 years as a staff nurse at Temple University Hospital’s ER. She is the President of the Pennsylvania Association of Staff…