Understanding the Players in Syria

After a recent visit to Syria, Patrick Cockburn describes the pluralistic, militant groups that make up the "failed opposition" in Syria and provides the brutal truth about the history of Syrian President Assad

After a recent visit to Syria, Patrick Cockburn describes the pluralistic, militant groups that make up the "failed opposition" in Syria and provides the brutal truth about the history of Syrian President Assad 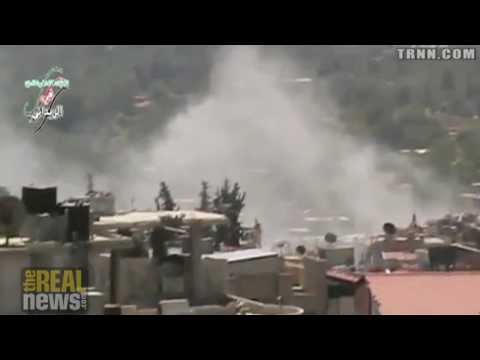 JESSICA DESVARIEUX, TRNN PRODUCER: Welcome to The Real News Network. I’m Jessica Desvarieux in Baltimore. And welcome to part two of our interview with Patrick Cockburn.

Now joining us from London is Patrick Cockburn. Patrick is the Middle East correspondent for The Independent, and he spent two weeks reporting from Damascus, Syria, this summer.

DESVARIEUX: So, Patrick, as I mentioned, you were in Syria this summer. Can you give us a sense of what you encountered on the ground, specifically the opposition? Who is the opposition?

COCKBURN: Well, you know, it’s a really diverse opposition. By one estimate, there are 1,200 different groups, armed groups in the opposition. Some are just, you know, an extended family, maybe a couple of dozen people with guns and maybe a few RPGs, rocket launchers, and some are private armies, you know, with several thousand people.

Moving around Syria, it’s a strange sort of jigsaw puzzle. You know, in Damascus, I was staying in the Christian quarter, but, you know, the rebel-held areas a couple of miles away, the government is firing artillery into them, into these rebel-held areas. The rebels are firing mortars back. A couple of mortar bombs came down near me, killed four perfectly–five perfectly innocent civilians perfect in the old city.

So when driving sort of around Damascus, you suddenly–you know, there’s some firing, you suddenly have to divert around one district. It’s very difficult to estimate how long it’s going to take you to get anywhere, because you may suddenly have to move from a big main road into a small side road. There may be lots of other people trying to do the same thing.

Then the opposition in, for instance, Homs, 100 miles north of Damascus, there’s been a lot of battles there, and most of the city held by the government forces, but the old city and some other areas held by the rebels. Often in rebel-held areas, because of the artillery fire, people have mostly left. Some areas, like the old city of Homs, are really empty apart from about three or four thousand fighters. Other areas it’s difficult.

I think that’s why it’s very dangerous moving around. At one area, a big area, the government said–the rebels said that the government held it. But when I got there, actually–you know, you ask–there are checkpoints everywhere. You ask these checkpoints, you know, is it safe to move further on? And usually, you know, they’re pretty well informed. And, you know, you see little earth banks. But you don’t quite know who holds any area and you don’t want to find out the hard way. I always look at oncoming traffic. If there’s no oncoming traffic coming towards you, that’s a bad sign. Something’s stopping the traffic coming on. But it’s dangerous moving around.

Now, you have–the most powerful fighting units in the opposition are al-Qaeda linked, the al-Nusra Front, the Islamic State of Iraq in the Levant, some other groups. They’re well supplied, they’re well disciplined. Some of the opposition are sort of very close to being bandits. Around Aleppo, for instance, you have mass looting of factories, whole factories being dismantled and taken off to Turkey and sold.

So you have a country that’s disintegrated. I mean, the impression I came away with and still have is in Syria–and this is what makes intervention so difficult–you have a failed government, but you also have a failed opposition.

DESVARIEUX: And with this failed government, let’s talk specifically about it Assad. You have–a lot of people who are against intervention have–I don’t know if intentionally, but I, for one, I witnessed a protest in Boston this past weekend, and I saw people out there with flags with Assad’s face on them, and they were saying they were against direct military intervention, but then they were holding these flags with Assad. I kind of want you to give us a sense of the history of Assad. He is a dictator. He did oppress peaceful protests when they first emerged. Can you just sort of tell our viewers a bit more about Assad and his regime?

COCKBURN: Well, the regime has been there for 40 years. It’s the Syrian Ba’ath Party, a conspiratorial, pretty brutal group who tend came to power through a military coup. His father, Hafez al-Assad, who was a military officer, tended to operate through the intelligence services, security services. One of the most feared buildings in most Syrian towns is the Air Force intelligence building, with a fearsome reputation for torture and torturing prisoners and shooting and killing them.

So when he came–Bashar al-Assad, when he came to power about 13 years ago, he–there were hopes that he’d be more sort of moderate than his father. He’d been a doctor in London. I mean, others who knew him at that time said that these hopes were always exaggerated, and that’s what turned out to be close to the truth.

In 2011, when demonstrations started against the regime, Bashar was fairly popular, quite popular, but it was the tremendous crackdown by the regime of opening fire on demonstrators and throwing people into jail, torturing people. I think it an exaggerated–I think what happened was that they’d seen regimes go down in Egypt and Tunisia, and they thought, the same’s going to happen to us, so let’s stamp it out before it happens.

But, you know, like a lot of situations like that, when–if you are extremely brutal in trying to stamp something out, you may have exactly the contrary effect, which seems to have been what happened here. They’re accused of arresting and torturing children in the south, tremendous demonstrations. So at that stage they were often, I think, probably their own worst enemies, that it was their overreaction and their willingness to use extreme violence against peaceful demonstrators that sort of precipitated this extraordinarily ferocious civil war.

DESVARIEUX: [inaud.] see that there’s a possibility for peace talks at this point, a political solution that could be derived with the opposition, as well as Assad, sitting at one table and coming up with one coherent political solution?

COCKBURN: I think that’s the direction to go. But, unfortunately, I think there just isn’t going to be a solution. When you have people fighting each other, when you have people who really hate each other, people who–both sides lost relatives. You have the allegations of the mass use of poison gas in Damascus. How many governments do that, if that’s true? So I don’t think you can have a solution, in other words, an agreement to share power between the opposition and the government.

But at the same time, I think if you do have talks–and the U.S. and Russia had to agree that there would be talks in Geneva–you should go first for a ceasefire. It may not last very long. You need the UN, I think, to mediate and enforce it. But what you need to do is bring down the level of violence, which is now so extreme that nobody can talk about anything. Both sides are trying to try and kill each other, which is also very important to realize, that both sides, I think, still imagine that they can win.

I think they’re wrong. I think there’s a stalemate which has really been going on for the last year, so I think that you need a ceasefire and get away from what used to be called in Northern Ireland the politics of the last atrocity, that there are so many atrocities that everybody’s reacting to them and [incompr.] can even talk about bringing the war to an end.

DESVARIEUX: Okay. Well, thank you so much for joining us, Patrick.