Was Ahmad Chalabi Behind the Fall of Saddam Hussein?

On the death of Ahmad Chalabi, Patrick Cockburn of the Independent says the prevailing narrative attributed to Ahmad Chalabi absolves the press and the US of any responsibility for the war in Iraq

On the death of Ahmad Chalabi, Patrick Cockburn of the Independent says the prevailing narrative attributed to Ahmad Chalabi absolves the press and the US of any responsibility for the war in Iraq 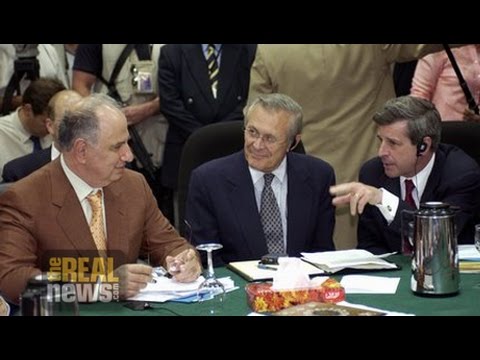 Ahmad Chalabi is dead at the age of 71 of a heart attack in Iraq. He was a former Iraqi politician who was very close to the CIA, the Project for the New American Century. He was also Bush administration officials such as Dick Cheney and Deputy Secretary of Defense Paul Wolfowitz. Chalabi is seen as the key source for claims that were used to justify the invasion of Iraq, such as intelligence that linked Saddam Hussein to be in possession of weapons of mass destruction that was then proven to be incorrect, and also he reported to U.S. officials that Saddam Hussein was maintaining ties with Al-Qaeda.

Now joining me to discuss all of this is Patrick Cockburn. Patrick is a correspondent for the Independent. He was awarded Foreign Reporter of the Year at the 2015 Press Awards. He is the author of The Rise of the Islamic State: ISIS and the New Sunni Revolution. Thank you so much for joining us.

PERIES: Patrick, let’s begin with the man himself. Who was Ahmad Chalabi?

COCKBURN: Well, I knew him very well over the last 25 years. He was an extraordinary figure. And not a person who is much understood inside or outside Iraq. He was very driven, very relentless. Very determined to get rid of Saddam Hussein. But he was never keen on Iraq being occupied. He wanted, thought the only way of getting rid of Saddam was to have the U.S. invade. Once the U.S. had done that he wanted the U.S. out. That’s why he was so much in favor of Washington before 2003, and a year later they were sending around troops to, possibly to arrest him. Certainly to [investigate], take stuff from his house.

So I think he was kind of misunderstood, because it was said that he’d passed on information about Saddam having weapons of mass destruction. Certainly he put journalists and politicians in the way of finding that. But he became a bit of a scapegoat for this. He wanted to get rid of Saddam, he passed this on. So did most of the Iraqi opposition at that time. But you know, it was extraordinarily naïve of journalists to just take his word for it, because he was, he was partisan. You know, he was trying to get rid of Saddam. So it’s no excuse for just running these stories without bothering to check them.

PERIES: So there are various groups that indicate, and sometimes say they have evidence, that Chalabi’s group, Iraqi National Congress, got more than $100 million from the CIA and other agencies between various U.S. funding sources to fund the opposition against Saddam Hussein and for him to get into power. Is there any truth to that?

COCKBURN: I think so, yes. I mean, these anti-Saddam [realizations] where we’re looking and finding money from the CIA and U.S., Chalabi didn’t get on, [inaud.] to get on with the CIA, who were actually [inaud.] by him from about the mid-’90s, I think partly because they couldn’t control him.

Chalabi was a very clever guy. But he used people, he used organizations to try and achieve his ends. He was very relentless. And so when he used them, you know, he was much disliked by the CIA, by the State Department, but he was a lot better than the other people whom they eventually chose to cooperate with, who said whatever they thought these agencies wanted to hear, and were pretty useless. Chalabi was pretty effective. And I think at the end of the day an Iraqi nationalist.

You know, he was, he had an amazing array of enemies. You know, Saddam Hussein, he was always on Iraqi television in Saddam’s time as a typical Iraqi [exiled] opposition [inaud.]. But the multi-millionaire living on the fat of the land, paid for by the CIA and other intelligence agencies. And that kind of stuck within Iraq, then abroad. He had friends, but he also had a lot of enemies. But I think the sort of demonization was very much exaggerated. As I said, you know, those papers [inaud.], so [inaud.] to say. They see Iraqi opposition guy gave me some information which is damaging to Saddam. And then just put it on the front page of the New York Times. I mean, how old are you. This is–all this information is partisan, was bound to be.

So I think all this [exposed] factor about how we were lured into war by [Saddam Hussein] is pretty, pretty silly. First of all, you know, the U.S. wouldn’t have invaded Iraq if it hadn’t been for 9/11. They weren’t going to do that. But it–it’s, you have to assume incredible naivete, that they believed everything that Saddam was saying.

PERIES: Now, this coverage in the, in the mainstream press that gives Chalabi this kind of role that he played prior to the invasion of Iraq, and alleging that he misinformed the CIA and of course the Bush administration all gives some pass in terms of investigative journalism, or to the mainstream media, for all the war hype prior to the Iraq war. Do you think that the mainstream press here is given a pass here, as a result of these allegations?

COCKBURN: Oh, yeah. They kind of used [inaud.]. You know, you had articles appearing which, you know, if you knew something about Iraq were just obvious nonsense, in the New Yorker, on the front page of the New York Times. You know, it was a very low point in American journalism that this stuff was being published. You know, it was subsequently, they did, I think–the New York Times about a year later had an investigation into its own journalism, its own public editor, wrote a long letter explaining what had gone wrong and why they’d done it. It was pretty shameful stuff.

Then they sort of blamed Chalabi, the intelligence agency. But these weren’t naïve people. You know, what did they think they were doing? Well when, you know, Chalabi afterwards said, well you know, I was trying to overthrow Saddam Hussein. I didn’t, I passed on this information. So you know, I think this was pretty understandable. I mean, I was, often got to tell stories like that at that time about Iraqi opposition. And you know, I discard about two-thirds of them as being fabrications. So I think that putting all the blame on Chalabi is very naïve, and [they’re] actually very culpable.

COCKBURN: I don’t think there was much of a direct link. But I think in general terms–look, you know, we all know that Iraq is the world’s [inaud.] producer of, you know, [cabbages] and nothing else, the rest of the world [and the] United States wouldn’t be that interested in what happens there. But the fact it’s oil did make a difference. Were the oil companies taking a horrible [inaud.] concession to get rid of Saddam? I’m not sure they did. I think there was a general feeling of gratitude throughout Iraq. But it wasn’t, sort of, specific oil companies saying get rid of Saddam and go into Iraq and make a buck there.

PERIES: And one of the reasons that Chalabi was hobnobbing with the conservatives in the United States is because he was actually poised to be the leader of Iraq when Saddam Hussein fell. Why didn’t he become the leader?

COCKBURN: He was never that popular among Iraqis. You know, he was kind of–spent most of his time outside Iraq. He never had much of a popular following. Though he got elected to parliament, but didn’t have much of a popular following. And he’d been kind of demonized by Saddam before, so people were distrustful of him. And that never quite took off. Also, you know, in the early days things were kind of run by the U.S., and they didn’t trust him, I think partly because they didn’t control him.

But when you look to the people they did trust, Chalabi looked [kind of] good news compared to these other fellows, you know, who were completely incompetent and stole everything that wasn’t nailed down.

PERIES: All right, Patrick. I thank you so much for joining us on such a late hour for you.

COCKBURN: Not at all, thank you.