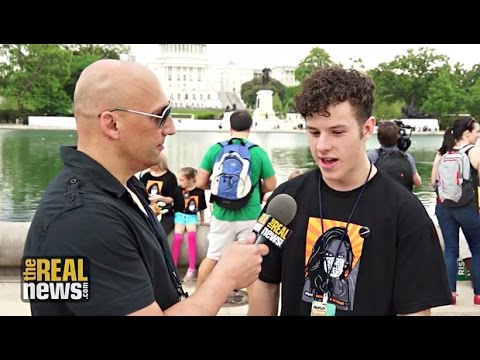 DIMITRI LASCARIS: Thanks for joining us today, Nolan.

DIMITRI LASCARIS: And as somebody whose long term future is likely to be impacted by climate change, tell us what is it that motivates you to come out here today, and have your voice heard?

It’s a little bit different than any other climate march, because we wanted to put the people at the forefront, especially the communities that are going to be most affected by climate change. You know, the indigenous populations, people of lower socioeconomic status, and kids.

And ultimately it’s going to be us that are going to help stop these bad policies, and help stop climate change.

DIMITRI LASCARIS: And how much do your colleagues in the entertainment industry — do you think that there’s an increasing awareness of the need for them to become engaged in this problem?

DIMITRI LASCARIS: And given the attitude of the Trump administration to the climate crisis, they apparently believe, in that administration, that it isn’t real. It’s a hoax perpetrated by the Chinese, and they seem to be very determined to advance the interests of the fossil fuels industry.

Do you think that these conventional forms of protest — where people come out and lawfully and peacefully, express their will — do you think that those are sufficient? Or do you think we’re going to need to up our game and engage in more militant forms –- albeit peaceful forms -– of resistance to the agenda of the Trump administration?

NOLAN GOULD: I do believe. I do believe it will be sufficient. This is… protesting is one of the foundings… founding… you know, parts of our democracy, and I fully believe in it. We’re coming out, you know, in support of a lot of great things that are not truly bipartisan issues. One of the things that we’re here to support is, clean air and clean water for all. These are not issues… these are things that the American people want… we want clean water for all; we want clean air for all. These are basic fundamental rights.

But, you know, like you said, the administration is heavily interested in fossil fuels, and we’ve been hearing this conversation a lot. Jobs over the environment, but it doesn’t have to be that way, they can go hand in hand. You know, new jobs can be created in new sectors involving the environment.

You know, let’s put a stop to dirty fossil fuels. Let’s create new jobs in clean, sustainable energy. And I think those are all things that can be accomplished through protests, peaceful protests, like this one right here.

DIMITRI LASCARIS: Thank you very much, Nolan, and I wish you a great march.

NOLAN GOULD: It was great talking to you.