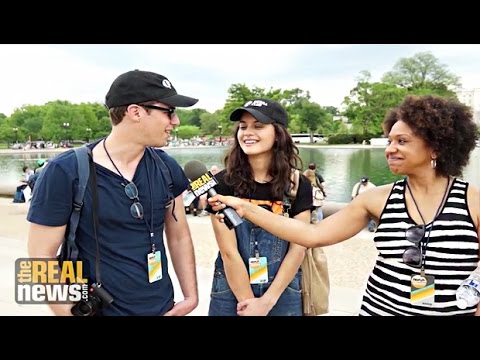 KIM BROWN: We are out here at the People’s Global Climate March, joined by some very notable attendees. Can you guys introduce yourselves to our audience, and let us know why you’re out here?

SOFIA BLACK-D’ELIA: My name is Sofia Black-D’Elia. I’m out here to support our planet, and… and all these people marching today, and I’m really excited to be here.

HENRY JOOST: My name’s Henry Joost. I’m a filmmaker. Also out here to support the planet and, you know, I think this is the biggest struggle we face currently as a… humanity right now.

KIM BROWN: And how has climate change either impacted you directly, or a community that you know directly, or environmental justice issues. People dealing with ongoing water crises, like we see in Flint, Michigan and other communities, and people dealing with a variety of things that impact public health in a very negative way? What are some of the issues that are important to you specifically?

HENRY JOOST: I grew up around the North Fork of Long Island, and I’ve seen it change, even within my lifetime. Just the changing populations of oysters, and things like that, and have traveled a lot and worked on the documentary, “Before the Flood”, and traveled widely with that and saw the tar sands, and how it impacted the indigenous people in Canada.

And it’s just… it’s totally undeniable what affect this is having on our planet, and I think it affects all of us. And it doesn’t mean you have to live near the wilderness to be affected by it, because we all experience the kind of runoff of climate change, no matter where you live.

SOFIA BLACK-D’ELIA: I think part of the problem, actually, that we face is that sometimes it’s not at your front door, and so it can be easier to ignore, than something that you have to wake up and face every single day. And, you know, we live in Brooklyn, New York. Like, we might not have to… if we didn’t want to, we didn’t have to think about it.

And I think that that’s part of why it’s so important for everybody to be out here today, and to bring awareness to something that can easily slide by if you let it.

KIM BROWN: Given all the overwhelming evidence about how the planet is changing, how the seas are rising, and acidification, and the warming of the oceans, we have a man who is sitting in the White House who actually denies that some of this is happening.

We have an administrator of the Environmental Protection Agency, who doesn’t want to admit that climate change is linked to human activity. What can we do in the face of such willful ignorance, from those at the very top of our government?

SOFIA BLACK-D’ELIA: It’s a really good question that I struggle with every day. (laughs) You know, I think that today is a perfect example of what we can do. Because these are men that are not serving the people’s interests, and that’s why this is called the People’s Climate March, because it’s about us.

And it is our responsible and it is our duty, and if they’re not going to take responsibility for it, then we have to. And I think that’s why we’re all here today.

HENRY JOOST: Yeah. I think… I mean, we have to… I don’t know how to do this, but I think we have to separate politics from climate change, because it’s real… Somehow it became a partisan issue where, you know, it depends on which side of the struggle you’re on, but really, we’re all sharing the same planet. We’re all living in this big house together, and we need to take care of it. And, you know, if someone doesn’t pick up the trash in your house, like… you know, you’re…

SOFIA BLACK-D’ELIA: Kick them out of the house?

HENRY JOOST: …you’re going to kick them out. But that’s not an option…

KIM BROWN: Guys, thank you both so much for speaking with us. Thank you. Nice to meet you…