How is Privatization Failing America?

Paul Bucheitt: From healthcare to education, research shows an increase in privatization leaves the public with the losses and corporations with the gains

Paul Bucheitt: From healthcare to education, research shows an increase in privatization leaves the public with the losses and corporations with the gains 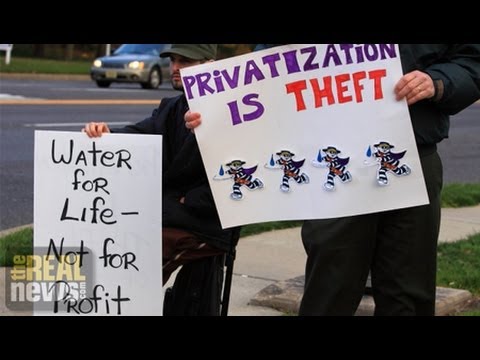 Here at The Real News, we want to expand our coverage of privatization and ways that it works and ways that it doesn’t work. As we detailed in our recent coverage of the American Legislative Exchange Council, or ALEC, there’s a greater and greater push for corporate interests to privatize areas of society that have been under the public sector banner, as well as a continued effort to further deregulate already private sector areas.

With us to dig deeper into the issue of privatization and its effects is Paul Buchheit. He’s a college teacher at DePaul University in Chicago, a writer for progressive publications, and the founder and developer of social justice and educational websites like UsAgainstGreed.org.

DESVARIEUX: So, Paul, welcome back to The Real News.

Let’s talk about your piece called “Eight Ways Privatization Has Failed America”. As Ted Koppel recently said, privatizing ourselves into one disaster after another, that’s what we’ve been doing.

BUCHHEIT: Well, yes, that’s a good way to put it.

Yes. I think I’d like to preface my comments about health care with a general statement that it’s remarkable how the mainstream media is finally starting to realize that the myth of the free market is exactly that. It just hasn’t really worked. If you look at all the major areas of society, not just health care, but education and water and other basic human needs and prisons, and even banking, public institutions have been working better than private industry.

So you asked about health care to begin with. That’s a clear-cut example of–to me and I think to anybody who studies the issues, that it’s much more expensive. Our health-care system–and the right-wingers will blame Medicare, but it’s the cost of–it’s too many hands of the pot. You have doctors and hospitals and insurance companies and drug companies, and they’ve worked the system to the point where basic surgeries, you know, kidney stones or something, cost three times more in America than in countries with a single payer. And it’s not just the cost of care. Administrative costs are about three times higher for private medicine than for Medicare. And these are reputable studies or reports that have shown us that our private health care system is clearly out of control. And I think everybody realizes that, but there’s too much money being made by those CEOs you mentioned to change the system.

And one more point on that about CEOs. Think about this. The Medicare administrator last year made about $200,000. The CEO of MD Anderson Cancer Center made ten times as much, $2 million, and the CEO of UnitedHealthcare made 300 times as much, $50 million. I mean, you know, when you think about the importance of providing care, health care to everybody in our country, children and old people especially, and millions of dollars are going to just a few individuals, it’s really rather obscene.

DESVARIEUX: Okay. Paul, you mention that the care is a lot cheaper in other countries, but let’s talk about also just the quality of care, ’cause some might argue, oh, because of these high prices we have, the quality of care in the United States is better than those countries that might have single-payer. Is there any merit to that sort of argument?

BUCHHEIT: Well, not really. There’s been–if you look at OECD, Organization of Economic Cooperation and Development, which compiles statistics comparing countries, over the last 30 years it shows that United States, which used to be a leader in health statistics like life expectancy and infant mortality, we’ve dropped down. We were near the top in the 1980s, and now we’re near the bottom of developed countries. So it’s been a dramatic swing from one extreme to the other. And it’s interesting that the only group in America that’s really increased their life expectancy is the group of Medicare patients.

DESVARIEUX: Okay. Let’s move on to your second point. You talk about the privatization of water. And there was actually a Citigroup economist that said, quote, “Water as an asset class will, in my view, become eventually the single most important physical-commodity based asset class, dwarfing oil, copper, agricultural commodities and precious metals.” What has the effect of water privatization been?

BUCHHEIT: Well, it’s sort of a cruel joke among financial people, I think, that water is the next big market. You know, taking something that’s so essential to life as, you know, food, air, and water and taking part of that and just making a commodity of it, it’s shameful, in my opinion. And it doesn’t work. You know, these companies, the examples in the past–Food & Water Watch did a lengthy analysis of this and found that private companies charge about 80 percent more for water services than public utilities. And that’s conservative estimate.

And then companies like Nestlé, for example, they’re big in the water business. Well, you know, it’s just that whole concept of putting water into bottles, you know, water that probably is no better than tap water. But companies like Nestlé, it’s an incredible figure. I’ve never been able to get over it. But they buy water for, like, a fraction of a penny a gallon and sell it back for 100,000 times as much. That’s the kind of profit they’re making on our water.

Okay. Let’s move on to your third point, internet TV and phone. This is not the case that people are trying to privatize internet and phone and TV. They’ve already been privatized. But it’s more about regulation. Is the issue right now that deregulation has become so rampant that consumers aren’t being protected? For example, could you talk about–could you actually give us specific examples of this?

BUCHHEIT: Well, back in the ’90s, there was–when companies like AT&T and Comcast and Verizon were pushing for deregulation, they said it would promote competition and bring down costs. But just the opposite has happened. Now there’s only, like, four big media companies or telephone and cable and internet companies, and they–it’s more of an oligopoly. You know, they–I’m not going to accuse them of conspiring or colluding, you know, but their costs have continued to go up. We–almost all of us can relate to this, you know, what we pay for our phones and internet service and TV. We pay–again, comparing to other countries like Korea and Hong Kong and European countries, we pay about three times more, and we get, like, one-tenth of the speed. Now, if there were true competition and if there were regulations that were limiting these companies from gouging consumers, then this wouldn’t happen. We should be getting much better service. And most Americans don’t realize that. We just take what we can get. But we don’t realize how the companies are really taking advantage. And deregulation is–in the ’90s is really what started it.

DESVARIEUX: Okay. Lastly, let’s switch gears and talk about transportation. How much of the United States’ transportation has been privatized thus far?

BUCHHEIT: Well, this is really a sore spot for me and my family, because living here in Chicago, when Mayor Daley left office, he sold out our parking facilities, parking meters to some company for, like, $1 billion. So he went out in style. You know, like, here I’m on paying off all these debts, you know, and all I had to do was make this deal. But now it’s coming back to haunt us, a 75-year deal where the company immediately doubled the rates. And we’re all paying–I don’t go downtown and park anymore because it costs so much more. And it’s not just in Chicago. Around the country, any time attempts have been made to privatize parking or roads, you know, like in California and Georgia, the prices immediately went up.

And then another aspect of transportation is public trains and, you know, rail service. And this always gets me, too, how the right-wingers, the libertarians will actually refer to public rail systems as socialist or Soviet style systems, you know, as if there’s something evil know about trying to provide cheap transportation for people. But, again, that’s an example of capitalism favoring the few people in power with the–that are taking all the money from these deals. But the vast majority of us are paying higher tolls and getting less in service.

DESVARIEUX: Okay. In our next segment, we’re going to talk about your last four points.

Thanks so much for joining us, Paul.

Paul Buchheit is a college teacher, an active member of US Uncut Chicago, founder and developer of social justice and educational websites (UsAgainstGreed.org, PayUpNow.org, RappingHistory.org), and the editor and main author of "American Wars: Illusions and Realities" (Clarity Press). He can be reached at [email protected]