50% of Americans Live in Poverty

Paul Buchheit: Based on assets and income, number of people in poverty closer to 50% rather than official stat of 15%

Paul Buchheit: Based on assets and income, number of people in poverty closer to 50% rather than official stat of 15% 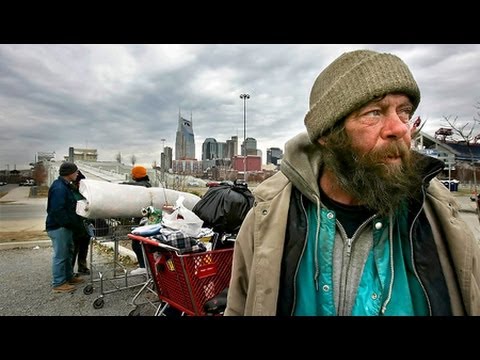 According to the Census Bureau, 15 percent of Americans live in poverty. Our next guest thinks the number is higher, a lot higher, more like 50 percent.

Now joining us from Chicago to discuss all this is Paul Buchheit. He’s a teacher at DePaul University in Chicago. He’s the founder and developer of the social justice website Us Against Greed.

JAY: So, Paul, how do you arrive at this 50 percent number?

BUCHHEIT: Well, it’s, needless to say, a controversial figure, half of America or close to half in poverty. But the Census Bureau, their own figures, they’re conservative. And they admit–they have something called a supplemental poverty measure, in which they show that perhaps twice as many, perhaps 30 or 35 percent of Americans are in or near poverty.

And then I researched a lot of different reputable sites. The Economic Policy Institute has some excellent figures about wealth. And if you study those figures, you’ll see that in almost half of America, 47 percent, to use Mitt Romney’s famous number, have zero wealth. Their debt outweighs their assets. So that’s wealth.

But even going back to income, annual income, the median income in America is $34,000. According to the Social Security Administration it’s less, it’s $30,000. Now, consider it. That means half the families in America are making $30,000 to $34,000 or less. And to be eligible for food assistance, for SNAP, you can make about that much, 130 percent over the official poverty level, which comes to about $30,000. So it’s–I believe it’s fair to say that half of America is in or near poverty.

And, of course, I want to qualify that with the thought which I received from a lot of readers that of course poverty in the United States compared to the rest of the world is not poverty in their eyes. And, sure, that’s understandable and a sad situation. But we’re just talking about Americans here, and half of them are in a condition that’s close to what we would–the Census Bureau and Social Security and others would call poverty.

JAY: And in the article you wrote, you had some other examples how you get to this 50 percent number.

BUCHHEIT: Well, yes. First of all, consider that–take a family, even somebody in the upper half of America making $60,000, they’re going to pay about 20 percent of that in taxes, not so much federal taxes, but state tax, local tax, payroll tax, excise taxes. About $12,000 of their $60,000 will go for that. And then it’s been shown by Census and the Bureau of Labor Statistics and a few other sites that housing and food and transportation will take up about another $30,000 to $40,000 of their income. That leaves very little. And when you consider that the average family in America has somewhere between $50,000 and $100,000 of debt, then that pretty much removes or takes away their income. There’s very little left.

JAY: So in the next part of our interview with Paul, I’m going to ask the question, given all this, that half–perhaps as many as half of Americans are living in poverty, then why aren’t half of the Americans screaming blue murder? ‘Cause people may be pissed, but they don’t seem to be screaming, they don’t seem to be organizing or doing all that much about it. Certainly some are, but nowhere near the numbers we’re talking about.

So please join us for part two of our interview with Paul Buchheit on The Real News Network.