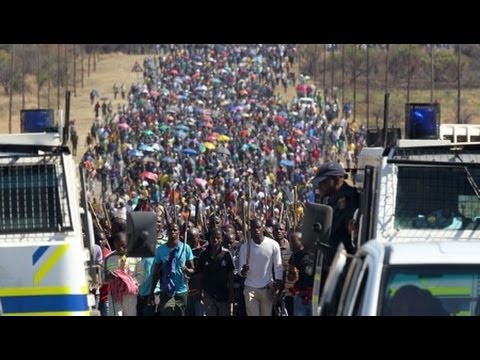 PAUL JAY, SENIOR EDITOR, TRNN: Welcome to The Real News Network. I’m Paul Jay in Baltimore. And welcome to this week’s edition of The Patrick Bond Report from South Africa.

Patrick is the director of the Centre for Civil Society and professor of the University of KwaZulu-Natal in South Africa. His latest books are Politics of Climate Justice and Durban’s Climate Gamble.

Thanks for joining us again, Patrick.

PATRICK BOND, DIRECTOR, CENTRE FOR CIVIL SOCIETY: Great to be with you, Paul. Thanks.

JAY: We were following the story of the South African platinum miners. What are some of the recent developments?

BOND: Well, I was in fact in Marikana a couple of days ago. That’s the site where Lonmin, the third-largest platinum company in the world, based in London, had a huge upsurge of protest from the trade unions, lasting about a year. And it culminated in September. The worst event was the famous massacre, Marikana Massacre, in which 34 of the mineworkers were shot dead, another 78 wounded, 270 arrested. Another dozen people were killed in the course of two or three weeks of extreme tension in the platinum mining belt.

And, Paul, you really have to see it. It’s very difficult to describe, but you can imagine a dusty and often frigid in the winter and boiling hot, now, in the summer site where most of the people live in either hostels, if they’re mineworkers, or in tin shanties, with a few decent houses. But there are these huge, big platinum mines. This is about 80Â percent of the world’s platinum that comes from this belt of land, along with some old Afrikaans-owned farming land and some old homelands of the bantustans of the apartheid era. It’s a mix of poverty and extraordinary wealth. And it’s in that context that the workers demanded a living wage.

And, of course, as your viewers will know, 34 were killed. And then, as a result of the continuing strength of the strike, they did win a 22Â percent increaseâ€”really, unheard of at a time of labor unrest that is about the highest in the world but not all that successful. We were ranked here in South Africa by the World Economic Forum’s Global Competitiveness Survey in September as the site of the single worst capital labour relations, and our protests per person, as the police report them, rank at the highest in the world, along with China. So this is a very, very intense site of class struggle.

And coming to the site again here in Marikana a couple of days ago, finding, again, tensionâ€”the workers have been off, and they are migrant workers, so they’re back in the eastern cape, in Mozambique, in Lesotho. And what I’m picking up is that they are still unhappy with Lonmin, and they may go back on strike again in coming days.

JAY: There was some question at the time, Patrick, of how much this strike would spread throughout other platinum mines, and even to gold and some of the other mines across South Africa. To what extent did it spread?

BOND: Well, it was quite extraordinary. It was the wildfire of wildcat strikes. And so it started in platinum in August. And then, after the Marikana workers won their 22Â percent, it really created a kind of rumble of confidence of working-class people, and they went on strike. About 100,000 of the platinum, the gold, and the coal miners in roughly a 300-mile belt were all on strike at the same time at one point. It was extraordinary. And their traditional trade union, the National Union of Mineworkers, simply unable to control this upsurge of militancy. And, indeed, the NUM, the mineworkers union, actually got in the way.

And, ironically, one of their former leaders, a great revolutionary at one point, Cyril Ramaphosa, was then a major mine owner and was a 9Â percent shareholder in Lonmin, and he wrote some emails that were then publicized in a commission following the massacre. The emails were to his old friends and allies in the stateâ€”the minister of police, the minister of mines, and they were to Lonmin and to the chairman of the company, and they said, we must end this now. These were, as he put it, dastardly criminal acts, and we need, as he put it, concomitant action.

JAY: Hang on. Just to be clear, the dastardly acts were the miners on strike, not the police shooting the miners.

BOND: That’s right. And what Ramaphosa was, in his defense, referring to was the two policemen and two security guards had been killed in the prior three days.

But really your viewers, I’m sure, will recallâ€”and there’s a terrific interview with Vishwas Satgar that you conducted at the time on your websiteâ€”and they’ll recall that the workers were simply roughly 3,000 sitting on a hill, and they were shot off the hill with rubber bullets and tear gas, and they were sort of directed into an area where, through a barbed wire fence, several of them emerged. Sixteen were shot at that point. Now, another 18 were killed back in the hinterland, near that entrance, but out of sight of the journalists, and they were really shot down from extraordinary, vicious attacks by the police. Now the police have come under such criticism for even planting weapons on the dead bodies and for repeated lies and misstatements.

And it’s very, very interesting. This Farlam Commission that was convened to look into it will probably run for another two or three months. And there’s no question that the police will be condemned. But really what has been shownâ€”and the question is what can be done about itâ€”is this confluence of big labor, big management, big government, all up against very, very poorly paid rock drill operators.

And the rock drill operators, when they revolted not only in Marikana but across the mining belt, then also spurred more wildcat strikes. They included the transport workers, truck drivers, nearly paralyzing the country’s transport system in September. Then the strikes moved to municipal and to some auto plants, and then into the Western Cape, where your viewers will know there are extraordinary wine farms, vineyards, and other fruit fields and other farms. And the Western Cape farmworkers were on, again, an extraordinary strike demanding about $20 per day as their minimum wage. And they didn’t win it. The momentum and the strength of workers had begun to ebb.

But after the holiday break here, which now is just wrapping up, I do anticipate an upsurge again in the class struggle. And it’ll be very difficult for the state to move again with such force, because of the huge overreach that they had done in Marikana.

JAY: And, Patrick, what has this done to the political struggle in South Africa? You mentioned one fellow in particular who owned 9Â percent of the platinum mine that was on strike, but that’s just sort of, like, the tip of the iceberg, isn’t it, that there’s many black Africans that have become millionaires and even billionaires and a new elite as the conditions for workers have not improved very muchâ€”or some people, I’ve heard, think it’s even gotten worse in some ways. What is that doing on the political side?

BOND: Well, in fact, the convention of the African National Congressâ€”your listeners and viewers will know about Nelson Mandela and his party, which was once a great revolutionary and pure and genuinely enlightenment-oriented party, has over the last 18 years of ruling in South Africa by all accounts become one of the more corrupt governments, and particularly under Jacob Zuma.

Now, Jacob Zuma two weeks ago was reelected as the head of this party just before Christmas, and that was one of the most watched events in politics around the world, because he was challenged by his number two, Kgalema Motlanthe, also a former mineworker leader. And Motlanthe lost badly because Jacob Zuma brought especially large numbers of people from his home region, KwaZulu, and the KwaZulu-Natal province had roughly a quarter of the delegates.

But what was interesting was how when Motlanthe lost, he’s still the deputy president of the country, but he’s lost the deputy presidency of the ruling party, and the new deputy president, as you say, Cyril Ramaphosa, who is one of the two or three biggest black capitalists in South Africaâ€”he’s number two in his assets, and they include McDonald’s franchise, a wide variety through his conglomerate, Shanduka, which will require him, if he does move deeply into the government, to now, as the number two in the ruling party, to make a large divestment or some sort of blind trust.

But I think what’s important is that this ruling party distance itself from the masses and from the trade union movement by putting Cyril Ramaphosa in at such a high level, and also very clearly signaling to big business, there will be no talk of nationalization of mines.

JAY: Alright. Thanks a lot for joining us, Patrick.