Global Protest in 300 Cities Will Take Aim on Monsanto

Hundreds of thousands of people are expected to challenge Monsanto's bullying of small farmers, influence on public policy, and aggressive promotion of GMOs.

Hundreds of thousands of people are expected to challenge Monsanto's bullying of small farmers, influence on public policy, and aggressive promotion of GMOs. 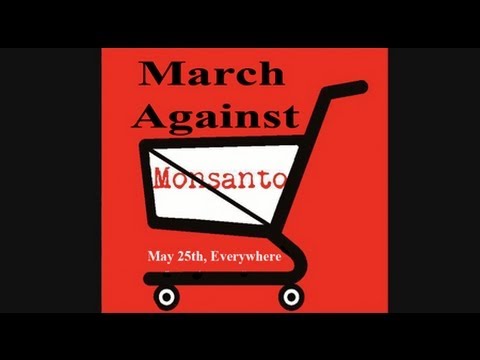 On Saturday, there will be protests against the Monsanto biotech company around the world. Organizers are expecting as many as 300 cities to be involved.

Now joining us to discuss all of this is Patrick Bond. Patrick is director of the Centre for Civil Society and a professor at the University of KwaZulu-Natal in South Africa. He’s also the author and editor of the recently released books Politics of Climate Justice and Durban’s Climate Gamble.

And Patrick’s in South Africa, of course.

PATRICK BOND, DIRECTOR, CENTRE FOR CIVIL SOCIETY: Great to be with you again, Paul.

JAY: So give us a sense of what to expect on Saturday.

BOND: Paul, this is a very important day to test the muscle of global civil society against one of the worst corporations, regularly lambasted for its control of our food system as well as governments. And it’s an important corporation for public interests and public health advocates for many years. You know that this was the company, along with Dow, its competitor, Dow chemicals, that manufactured Agent Orange. And in Vietnam, around 400,000 deaths, half a million birth defects, 1 million people who are ill as a result of Agent Orange being dropped on about 12 percent of the country during the 1960s. And that did lead, in 1984, to a lawsuit victory for about 290,000 survivors, about $180 million in penalties paid by Monsanto. But there’s a new generation of the victims of Monsanto filing lawsuits on Agent Orange. And that’s just one of the many ways in which this chemical company’s attempts to make profits at the expense of untested or very, very dangerous chemicals is now being contested. And there are plenty of others.

And the control of governments by corporations is of great concern. And Monsanto’s right at the top. They’ve had people working for them that include Hillary Clinton, Senator Dennis DeConcini. And here in South Africa, when Monsanto came about 20 years ago, they used a former congressperson, Toby Moffett, who is part of that class of ’74 [crosstalk]

JAY: When you say “working for them”, what do you mean?

BOND: Well, these were consultants at one time or another, or lawyers. And then they became–and there are many, many other cases, top food and drug administration officials and other major government players who have a revolving door with Monsanto, either as lawyers or consultants, or having actually worked for the corporations.

And I think that was one of the reasons why earlier this year such a furor emerged about what’s being called the Monsanto protection act in the agricultural appropriations that was passed in the U.S. Senate. And the head of that committee, Barbara Mikulski, from the state of Maryland, has actually apologized for letting that go through. It’s an attempt by Monsanto to get immunity from, say, judges.

Three years ago, for example, in San Francisco, sugar beads that were genetically modified by Monsanto were banned by a judge. And this obviously bothered Monsanto, and they were able to get some language into legislation that passed that would allow the Food and Drug Administration to overrule the courts and give them immunity, since the Food and Drug Administration is seen as a sort of captive regulator of Monsanto.

These are some of the reasons, along with a recent spate of health warnings from genetically modified organisms that are of great concern and bringing, I think, a couple of hundred thousand people out on Saturday to march against Monsanto.

JAY: And a lot of this is of course about the food supply. Monsanto, creating GMO, created genetically modified seeds, and then suing farmers in various ways. So explain all that.

BOND: That’s right. These lawsuits by Monsanto against small farmers go back many years through a famous Canadian case, Percy Schmeiser, as well as current cases. And the Supreme Court is probably going to rule in the company’s favor that even if these seeds migrate into your farm and if you buy seeds that have some residue of past Roundup and other ingredients from Monsanto, then the company can charge you again and again for perpetuity.

And this reflects some of the massive victories of this corporation in the courts, for example, a big antitrust lawsuit that they were basically guilty of. The country over many years has won lawsuits because of its immense power and legal prowess. And I think that means if you’re a small farmer and by mistake, for example, you’re buying some seed that might have some residue of Roundup or other Monsanto products, you will possibly be liable. The Supreme Court is looking at it now in the United States. And even Dow chemicals, which had filed some antitrust provisions in the U.S. government had as well, were not victorious against Monsanto. And Monsanto continues to increase its market share and power.

JAY: There seems to be two parts to the issue of opposition to and critique of Monsanto. One part is the monopolization of these GMO seeds and the way they’re using the courts and the way that affects the price of food, or the cost of production of food and thus the price. So food is getting more and more expensive, which is adding to speculation and other issues that are causing food bubbles and food prices. And then there’s the health issue. But deal with the cost of food first.

BOND: Well, yes. This is very important, because not only have speculative processes entered agriculture in a major way, causing major problems of food riots across the world; it does appear that some of the price comes from holding a monopoly patent provision on many of the seeds that the company has gained huge market control over. Some of those patents will actually expire. And one of the big questions is: will there be generic GMOs coming up, and Monsanto of course trying to keep its patents as long as possible, which will give it monopoly profits?

The other aspect of the pricing is that Monsanto is under a lot of pressure in different places for the banning of GMO. And they’re trying to argue that with climate change and with what they claim is food scarcity, even though there are many cases of food gluts that are just maldistributed, that they will be desperately needing more provisions for genetically modified organisms, GMOs.

And this is then being contested by environmentalists, who I think correctly are saying that this is untested. And the current spate of studies show tumors in rats, autism, all kinds of problems that are emerging, Parkinson’s, many diseases that the neurological nature emerging from GMOs. So this is really a contestation where countries like Russia, France, many European countries have banned GMOs. And here in South Africa, this is the staging post for Monsanto to push GMOs across the continent, and the demand from many of the environmental groups is to ban GMOs in our staple food, because there are very few places where the staple food–in this case maize, corn–is by Monsanto very, very dramatically penetrated with GMOs.

JAY: Now, some of the free trade agreements–and especially now we’re talking about the Trans-Pacific Partnership being negotiated by most of the countries–not China, but most of the countries that have anything to do with the Pacific. And apparently in that agreement, like NAFTA and some of the others, a company like Monsanto might be able to sue a government that bans it, saying that it’s an unfair trade practice. What is Monsanto’s role in all of this?

BOND: Yes. Monsanto’s got extraordinary capacity to try to manipulate the nature of government relations. And we’ve seen that in South Africa during the transition and the ability of the corporate sector in agriculture in South Africa to dominate the food supply. And that means here we have one of the more important struggles, I think, in three of the cities here in Durban, as well as Cape Town and Johannesburg, where people will be marching partly against GMOs, but also partly to take back government from more and more corporate control, whether it’s direct inside a government or in future free trade deals, as you mentioned.

February 24, 2020
Sign Up for Our Newsletter
Help Us Make Real News!