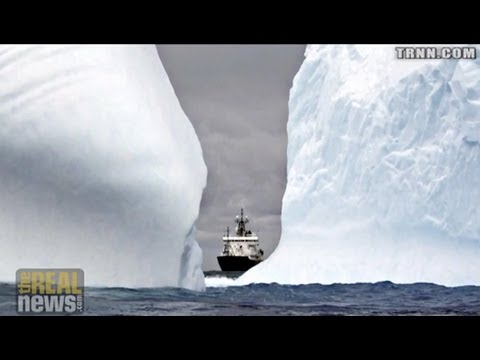 A new study conducted by economists and polar scientists accesses the planetary social and economic impacts of increasingly Arctic melting. On the economic side, we are looking at a potential climate catastrophe with the release of a single giant pulse of methane from thawing Arctic permafrost beneath the East Siberian Sea that could have a $60 trillion price tag and potentially undermine the global financial system.

With us to discuss all this is Patrick Bond. Patrick is the director of the Center for Civil Society and professor at the University of KwaZulu-Natal in South Africa. Bond is the author and editor of the recently released books Politics of Climate Justice and Durbin’s Climate Gamble.

PATRICK BOND, DIRECTOR, CENTRE FOR CIVIL SOCIETY: Thanks, Jessica. Good to be back with you.

DESVARIEUX: So, Patrick, will you please describe for our viewers what exactly was in this study? And why is it so significant?

BOND: Yes, this is the most important new economic research on the damage from climate change since Lord Stern’s famous report, and it’s a much greater scale difference with that 60 trillion estimate, with extreme weather events and especially the rising sea levels, which none of the planners in most of the big cities, including where I am, here in Durban, have yet taken into account.

The danger, of course, is that as the Arctic is melting, there’s going to be even more intense activity, especially oil extraction strategies, in the Arctic Ocean. The Russians have already planted their flag at the bottom, and the big oil companies are hungrily looking. But also the ships will be coming through the North Pole to try and become even more rapid in their international trading. And so all of this represents a more frenetic way to take advantage of the polar melt. And, in fact, in July there was even photographs circulating of the North Pole in a sea, in a sort of a lake of water. And at the same time, no one’s really thinking through the potential emergency that will affect us if indeed this big methane burp occurs.

DESVARIEUX: The study also outlined that, quote, much of the costs will be borne by developing countries, which will face extreme weather, poorer health, and lower agricultural production as Arctic warming affects climate. Can you talk specifically about which communities we’re talking about? And is there a plan that we don’t know about? Or is that happening behind the scenes to try to counter this potential methane burp and this climate debt?

BOND: Yes. Well, the only way to really affect the physical processes is to really cut back dramatically on carbon dioxide and other greenhouse gas emissions. If not, the first victims will be those small island states that go underwater, the Andes and Himalayas, where the snowpack will melt and the huge water problems will occur, first floods and then droughts, and then most of Africa, where especially inland we’re looking at probably a 5 degree increase in temperature centigrade above what the rest of the world will suffer because of this large landmass. And, of course, that’s maybe nine out of ten peasants unable to grow crops, according to the UNFCCC, the major United Nations agency looking at this. This is an extraordinary damage, which here in Africa would potentially kill 200 million people this century if we’re still just at 2 degrees. But now if the methane burp occurs, it would be a much greater increase.

And then the question is: well, who should pay? And is the money going to be there to begin to compensate? The technical term that the United Nations uses, loss and damage, finally came into discussion last December at the Doha conference of the parties, but, you know, of course, the United States blocking any discussion of the real liabilities. And instead, back in 2009, you’ll recall, at the Copenhagen Accord, Hillary Clinton, then the Secretary of State, had promised that $100 million per year green climate fund will come into being. And that might be the sort of secret plan, Jessica, because no one knows where that money’s going to come from, because no one’s committing enough.

The actual operation of the fund has begun. It’s based in Korea. A Tunisian woman’s now the head of it. But it does look like an empty fund, because even though $100 billion a year is nowhere near what the damage would be–even the World Bank estimates $400 billion–it looks like the climate debt is not being paid. There are debt chiselers. There is a default, in effect, by the rich countries now in a fiscal shortage, especially the United States and the E.U., which really owe the most historically.

DESVARIEUX: And now there’s also news that fracking is going to be taken offshore. Can you talk to us a little bit about what kind of effect that’s going to have on climate change potentially?

BOND: Yes. There’s a great deal of danger from a more rapid use, not only of the fracking, the natural gas, but all the associated production systems which could create per unit of energy just as much of the greenhouse gases that the standard oil and coal combustion do. And, of course, there’s the dramatic damage to water. And if this is occurring, as it looks like it will now offshore in Louisiana, some of the guinea pigs–we’re already seeing dead fish on the shores, and it looks like fracking is still out of control.

And a strong regulatory push from below, where municipality by municipality, places like Pittsburgh or countries like France–here in South Africa a big debate in a place called the Karoo against Shell, where a struggle was won temporarily, but now has to be reignited by a group called Treasure the Karoo against fracking. And, of course, this is happening all over the world and should be the basis for uniting climate activists, along with big strategies now in play, Jessica, against the Keystone, which are linking people from very diverse places–landowners in Nebraska this week filing a lawsuit that could delay the tar sands pipeline. And also this week, the Nez Perce Indians, the Native Americans of the Northwest in Idaho, are blocking a big truck bringing some of the tar sand rigs through. We’ve seen in Houston a coal terminal that’s going to get up and running also protested. And here South Africa this week, Anglo American, the big mining house, with a huge new coal-fired power plant, as well as Vedanta, working in collaboration–that’s the big Indian company–also protested by about 1,000 people, residents as well as those at the Johannesburg local headquarters of Anglo American.

So I see with Himalayan floods killing thousands last month, with Chinese heatwave where you have temperatures of about 100 degrees, 38 Celsius for ten straight days in Shanghai, hot enough to fry eggs on the pavement, we’re really seeing the effects of climate change and rising potentials for resistance. And this is very heartening, because this is certainly the biggest challenge of our times, and we need to start connecting the dots between all of the micro struggles that are happening to change public opinion and put the pressure on the oil and fossil fuel companies and the governments that they very strongly control.

DESVARIEUX: Well, it’s always a pleasure having you on the program, Patrick. Thanks for being with us.

BOND: Thank you very much.