Patrick Bond: Carbon markets are now at "junk bond" status but US sabotages all attempts at binding emission targets

Patrick Bond: Carbon markets are now at "junk bond" status but US sabotages all attempts at binding emission targets 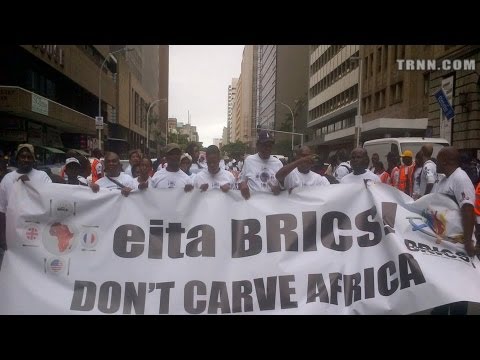 JESSICA DESVARIEUX, PRODUCER, TRNN: Welcome to The Real News. I’m Jessica Desvarieux in Baltimore. And welcome to the latest edition of The Patrick Bond Report.

Patrick Bond is the director of the Centre for Civil Society and professor at the University of KwaZulu-Natal in South Africa. Bond is the author and editor of the books Politics of Climate Justice and Durban’s Climate Gamble.

PATRICK BOND, DIRECTOR, CENTRE FOR CIVIL SOCIETY: Great to be with you again. Thanks, Jessica.

DESVARIEUX: So, Patrick, what is the latest news? What are you tracking in the environmental world?

BOND: Well, it’s really a time for the big-picture problems, because the major climate strategies are now in question as of a vote on Tuesday, April 16 in the European Union not to bail out the European Union Emission Trading Scheme. That’s the carbon market that was started with the 1997 Kyoto Protocol’s mandate. And the idea was to put a cap on emissions and slowly bring that cap down and allow companies and governments to trade the ability to pollute within that cap, and then to be able to sell the right to those that were more efficient, and therefore maximize economic output while still achieving emissions reductions.

And the problem is it just hasn’t worked at all. In fact, Union Bank of Switzerland estimated that over $300 billion has been wasted because none of the anticipated outcomes have materialized.

And the big problem for the European carbon market: price is down to under €3 a ton. I think it [trVft] down at about €2.50. And that’s from peaks, 2008, 2006, of over €30. So this is a market that’s sorely distressed because the European economy is in such a recession, and the pollution levels therefore don’t warrant this big rush to buy the carbon emissions reduction certificates.

So with that problem, with several major mainstream environmental groups and many of the policymakers now in a quandary, The Economist magazine this week asked, is this now a junk bond style market? And Time magazine asked, if it can’t work in Europe, can this carbon market strategy to reduce emissions work anywhere, just as California’s up and running this year, as Australia, New Zealand, and some of the emerging markets are also thinking about it?

So I think it’s an important moment, and the left, the climate justice movement, with about 50 different organizations, saying, scrap the ETS, scrap this emissions trading scheme, and instead let’s move to the regulatory strategy that would be tried and tested and much quicker, much more effective.

And then the big question is: will Europeans eschew the bankers’ strategy and move to a regulatory strategy?

DESVARIEUX: Another question is: do you believe this is a matter of just having enough political will to get these mandated emission cuts?

BOND: Well, Jessica, that’s indeed the proponents’ argument, and it is worth considering, because the major polluters, now number one China and number two the United States, they were part of a sabotage of the European Union’s emissions trading scheme, the Kyoto Protocol, and the entire United Nations back in 2009 at the conference of the parties in the Copenhagen United Nations Framework Convention on Climate Change summit. So that COP, COP15, was followed by Cancun and by Durban, and last year by Doha, and in each of these COPs, these conference of the parties, Washington really has been hell-bent on sabotaging the idea that there should be binding emissions cuts.

So they set up their own strategy, the Copenhagen accord, and they got four other countries to join up. And this is the big question now. Those countries, the basic countries, Brazil, South Africa, India, and China—and they were joined here in Durban last month. And they’re now called BRICS—Brazil, Russia, India, China, South Africa group. And that’s a bloc economically that’s the largest in the world. The GDP is about $20 trillion. In comparison, the U.S. and the E.U. are around $15 trillion.

That means that these economies, especially fast-growing China with its massive industrial output—it’s really outsourced a lot of the emissions from Europe and the United States. Will it be in a position to finally start addressing its vast environmental problems? You know, the last few weeks in China, people in Beijing, Shanghai have been unable to go outdoors without risk of respiratory disease, Jessica. So the question is: will these new leaders—. And we had the first visit by Xi Jinping, the new Chinese premier, outside China for the Durban BRICS. And I didn’t get a sense that they had any intention whatsoever.

I must say, Jessica, what we really found here in Durban was something similar to Berlin in 1885, namely, a carving up of Africa. That means the attempt here was to assure that the minerals, petroleum, the gas, the cash crops, would go from the mines and the plantations across the railroads and the roads and the bridges out to the ports, much like the old colonial powers in Berlin when they carved up Africa, set up the ridiculous borders, and assured more efficient extraction. And we really had a very clear sense that the objective of the Durban BRICS summit was rather similar and there was no intention whatsoever of addressing the huge social and ecological and economic aspects of the recourse curse of Africa with the kind of maldevelopment that we’ve seen with, especially, minerals and petroleum on the continent.

So it doesn’t really look very promising unless activists in these countries—and there was a BRICS from below countersummit here in Durban. And it may well be that over time, like the World Social Forum being held at the same time in Tunisia, at the end of last month, a revitalized movement of civil society is going to be the necessary check to get these big, big economies to finally address their huge emissions.

DESVARIEUX: Well, we’ll certainly continue to track this story. Thank you so much for joining us, Patrick.