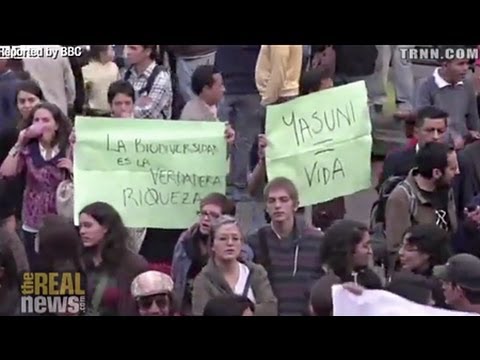 On August 15, the Ecuadorian president, Rafael Correa, announced that he is abandoning plans for an internationally funded conservation program for the Yasuni National Park. The park, which is located in the Ecuadorian Amazonian rain forest, is recognized as a UNESCO biosphere reserve and is said to contain more species in just one hectare than all the combined biodiversity of North America. The Yasuni international fundraising initiative was launched in 2007 after explorations revealed 796 million barrels of crude under an area known as the ITT Block.

With us to discuss all this is Patrick Bond. Patrick is the director of the Center for Civil Society and a professor at the University of KwaZulu-Natal in South Africa. Bond is also the author and editor of the recently released books Politics of Climate Justice and Durban’s Climate Gamble.

PATRICK BOND, DIRECTOR, CENTRE FOR CIVIL SOCIETY: Great to be back with you. Thanks, Jessica.

DESVARIEUX: So, Patrick, just for our viewers, can you give us a bit of the back story of what happened here, with the president of Ecuador calling that the world has failed us, after they were unable to raise enough funds to, quote-unquote, save this territory in the Amazon?

BOND: Well, he’s certainly correct that the money that should have come in to keep the Yasuni from being drilled for roughly $10 billion worth of oil that geologists think is underneath the beautiful Amazonian rain forest, the northern governments that were approached, especially Germany and Norway, certainly failed Correa. But his critics in Ecuador, such as Acción Ecológica, an eco-feminist group, or the [[email protected]] indigenous peoples network, say that partly because it is such extraordinarily rich biodiverse territory and two indigenous peoples who have had virtually no contact with the outside world live there and are threatened, Correa shouldn’t go ahead, and he should wait and develop the proposal in a way that more directly demands social solidarity from the North, not just the elite government officials who have rejected it.

DESVARIEUX: And also with drilling being proposed now across the United States and also the Virunga National Park in the Congo, are we going to see more of these types of passages of legislations and things of that nature where oil companies are now going to be chomping at the bit, really, to get some of these protected areas to explore?

BOND: Well, certainly the coal gas, the fracking, the shale and oil have been the targets of oil companies no matter where these fossil fuels are located.

I think what was critical about the Yasuni project which really gave it such extraordinary appeal was a national movement within Ecuador to consider it part of the patrimony, the natural resource base never to be touched, in a sense to give nature rights. And the Constitution was even changed to give nature rights. And it is going to be quite a task for Correa to push through a congress that certainly supports him in a way that the prior era, when Texaco (and now it’s called Chevron) had drilled ruthlessly, along with the Ecuadoran state government, to the tune of about $18 billion of damage, according to some reports–that process now can be much better contested.

So although there’s great despair at a pilot project which really would have been a down payment on a climate debt that the North owes the South–the Germans, for example, really opposed it. Dirk Niebel, the development aid minister, reversed his predecessor’s support for the project because he instead wanted to see a market-based mechanism–and it’s called REDD, the reducing emissions through deforestation and forest degradation. That strategy, which came from the World Bank, and supported by the more conservative wing in the United Nations and some NGOs, that’s going to take off, probably because Rafael Correa himself has hoped that carbon markets would be a site for selling the right to keep the Yasuni park from being drilled. And the big tragedy for everyone is that those markets have been completely useless. They have collapsed. They have no money.

And so Correa’s first strategy, being trained in the United States as an economist, to basically sell nature, to sell what are called payment for ecosystem services, that strategy having failed, then the strategy of asking politely for funding from the North having failed, what really needs to be done, it seems to me, having been out there for a week working with Oilwatch as a network around the world looking for similar sites, say, the Niger Delta, is that solidarity between northern civil society and those in the South struggling to keep the oil under the soil, or the tar sand in the land, the fracking shale gas under the grass, and the coal in a hole, they really need more of the citizens movements to insist that the governments of the North do the right thing. And that simply wasn’t there, because Correa never really did appeal to the northern citizenries. He played the game inside the circuits of the United Nations and in bilateral negotiations. And given the, frankly, anti-ecological posture of some of these governments, that wasn’t going to work.

DESVARIEUX: But the Yasuni National Park is a UNESCO biosphere reserve, Patrick. Is there any sort of legislation or international law that could protect a park like this?

BOND: Not as such. In fact, Correa has run roughshod over a great many local traditions, customs, parks, regulations by allowing his own company, and now, increasingly, Brazilian and especially Chinese companies, to come in and prospect and even start construction. So I think there’s a sense that although these are pink governments (they’re left of center), they tend to be more petro Keynesian in the case of Correa (they’d be petro socialist in the case of the late Hugo Chàvez or petro indigenous in the case of Evo Morales in Bolivia), and therefore not as tightly connected to the more eco-socialist, the rights of nature, and the other Earth-centered strategies that have respect for indigenous people that we’d all hoped for.

We really need a major breakthrough in consciousness, as well as in the financing, to keep the oil companies at bay, to make sure that governments like Ecuador’s have resources for development, but that they don’t take oil and other fossil fuels out of the soil, but instead the North pays the down payment owed on the climate debt so that there is less pressure to do the kinds of things Correa now seems set to do, drill paradise.

DESVARIEUX: Really interesting perspective. Thanks so much for joining us, Patrick.

December 3, 2019
Sign Up for Our Newsletter
Help Us Make Real News!