Patrick Bond: Developing countries and green groups must evaluate if walkouts are the best way to get rich countries to address climate change

Patrick Bond: Developing countries and green groups must evaluate if walkouts are the best way to get rich countries to address climate change 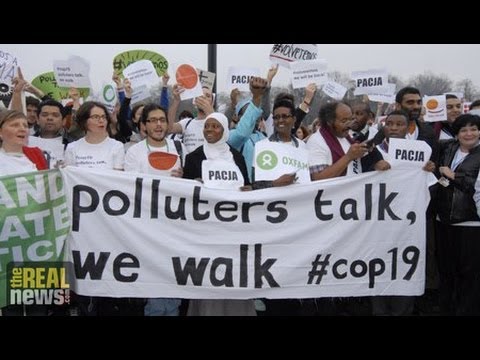 JAISAL NOOR, TRNN PRODUCER: Welcome to The Real News Network. I’m Jaisal Noor in Baltimore. And welcome to this latest edition of The Bond Report.

Now joining us is Patrick Bond. He’s the director of the Center for Civil Society and a professor at the University of KwaZulu-Natal in South Africa. He’s the author and editor of the recently released Politics of Climate Justice and Durban’s Climate Gamble.

PATRICK BOND, DIRECTOR, CENTRE FOR CIVIL SOCIETY: Great to be back with you. Thanks, Jaisal.

NOOR: So, Patrick, the UN Climate Change Conference in Warsaw is drawing to an end. We’ve seen temporary walkouts by the developing nations over the issue of who’s responsible for paying for climate disasters in the future. We’ve seen green groups walk out over the inaction at the conference that no meaningful change has been made. Give us an update about what’s been happening these last few days. And also, do you think these tactics are effective?

BOND: Well, listen, as this COP 19, like the other one since Copenhagen, draws to a very unsatisfactory end, the question must be: what can change the power relations?

And so we have seen quite a bit of drama known in the COPs, in which not only civil society, which back in the Copenhagen 2009 COP actually were pushed out when they were protesting inside–and they protested in Durban, South Africa, in 2011 and were kicked out, a good many of them, but also now 132 groups for three hours walking out the day before the final schedule closure because of the loss and damage clauses, which are very ineffectual.

Right now there’s no real provision to handle the liability that the North owes for overconsuming its fair share of the climate space. And basically the costs of these enormous disasters, such as the ones hitting the Philippines this year and many other third-world countries, as well as northern countries in recent years–Hurricane Sandy last year doing $60 billion damage. Who will pay loss and damage, and who has the ability to pay and the responsibility–an obvious question for the worst catastrophes that humankind has ever produced, these climate catastrophes? But until last year, loss and damage wasn’t even permitted to be uttered in the COPs because it was just too sensitive a question, this question of liability. And last year at the Doha meeting, the United States was again quite recalcitrant and refusing to accept liability, just acknowledging that there is loss and damage from climate.

Now we’re getting to the stage where the money has to come. The Green Climate Fund, a promised $100 billion per year that would start by 2022 to accommodate both the mitigation and adaptation costs, that’s going to be grossly inadequate. And now we’re seeing, very justifiably, very angry country representatives saying, we’re being damaged, our countries are sinking, our icecaps in the mountains are melting, our droughts and floods in Africa are getting worse and worse, and now we need someone to pay the bill, because we didn’t cause this damage.

NOOR: And, Patrick–and more about–can you talk more about the effectiveness of these walkouts? Because the walkout of the developing nations was just temporary and the 12 green groups who walked out–and it was hundreds of people with those groups. They walked out on Thursday. They’re going to be participating next year, in next year’s–in COP 20. So is this an effective strategy?

BOND: Well, it could be argued that these are groups like little children tossing their toys out of the cot, and they really are going to have to come up with a much tougher set of tactics to change the power relations. I would accept that argument because if a walkout basically denies legitimacy, it doesn’t really necessarily hurt the rich polluting countries, the most recalcitrant this year appearing to be Australia, with its new government shutting down its environment ministry, basically; Japan, because of Fukushima, moving much more to coal and to high-carbon; and then the U.S. is ever sabotaging.

But of course there are big developing countries, the BRICS countries, that haven’t made the changes that are going to be required to move to a stable climate, and so E.U. countries that owe a vast amount.

Now, I think there could be a discussion about much more tough sanctions, such as the 350.org network has begun to use against the corporations.

This COP more than any other has been infiltrated by corporations. The head of the COP, the United Nations Framework Convention on Climate Change secretary, Christiana Figueres, for example, on Monday was major speaker promoting clean coal, as if there is such a thing, at the major coal association. And big corporations have been in and out of these negotiations. So I think there’s a really important question, which is how to change the power balance and maybe even start the kinds of sanctions against the key individuals representing, for example, the U.S. State Department. Once the social movements that are active on climate, especially the climate justice camp, decides to take tougher action, they’ll learn a lot about boycott, divestment, sanctions from past campaigns, for example against South African apartheid or currently against the Israeli occupation of Palestine.

These are the kinds of techniques that are needed to hit the recalcitrant governments and corporations in the wallet, and I suppose also to delegitimize some of these negotiators who come to these COPs with no intention of change. In the next COP, which will be Peru a year from now, we won’t see much difference, and the big COP, Paris, the COP 21, that’s meant to be in 2015, the real crunch time to set up a new agreement. And I think we have to have climate justice activists honing tools and Third World governments that are going to be hardest hit becoming much tougher, not just a temporary walkout in the loss and damage section, not just a lockout walkout by civil society, but really the kind of pressures that people, for example, found in Seattle in 1999, really preventing delegates going and doing damage.

NOOR: And finally, Patrick, this whole discussion, it begs the question: can a capitalist system address climate change, the same system that’s totally happy with billions of people living in starvation or near starvation? In a capitalist society, will action only be taken when it’s already too late, when it becomes the interest of large corporations to actually address this?

BOND: Well, I was impressed, Jaisal, that in my few days in Warsaw, the debate began to open up about whether the techniques of capitalism would be effective, and indeed whether a postcapitalist planning of the environment and planning of or agricultural and energy transport production consumption disposal systems might be required.

Now, this is very difficult in a place like Poland because of its bad experience with a sort of Stalinist version of what they call socialism. But I think an eco-socialist approach may be indeed required, at least at this stage, for discussion. And in many places, the U.S. included, it’s very, very difficult to talk about a noncapitalist approach.

But if you think about the major technique that capitalists have been using, really there are two broad ones. One is a general set of geoengineering and other false solutions to try to find technical fixes for profit that might somehow or other lower carbon emissions. That just seems to be a fantasy. And a second fix is the privatization of the right to pollute, in a sense the commodification of the air. That’s called carbon trading. And this COP 19 pushed very hard to get carbon trading more broadly accepted as a world program, even though the European version has failed quite dramatically.

And it’s a very good question to ask the proponents. If we can’t see the bankers who are really in charge of these financial markets in trading of emissions and they’re unable to fix their own internal problems in the financial markets, how can we give them the responsibility to fix the planet’s major crisis?

NOOR: Patrick Bond, thank you so much for joining us.