Patrick Bond: South African platinum workers will see a pay increase by 2017, but opponents are now attempting to limit their ability to to strike again

Patrick Bond: South African platinum workers will see a pay increase by 2017, but opponents are now attempting to limit their ability to to strike again 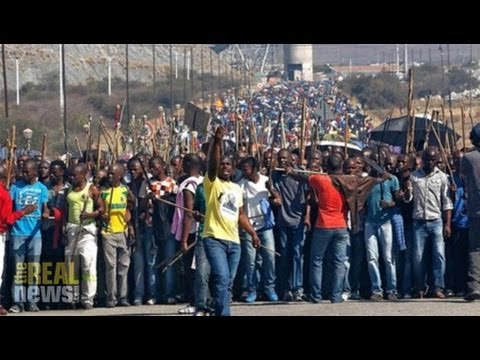 JESSICA DESVARIEUX, TRNN PRODUCER: Welcome to The Real News Network. I’m Jessica Desvarieux in Baltimore. And welcome to this edition of The Bond Report.

Here to give us an update on labor unrest in South Africa is Patrick Bond. Patrick Bond is the director of the Centre for Civil Society and a professor at the University of KwaZulu-Natal in South Africa. Bond is also the author of the book South Africa: The Present as History and another book, Elite Transition.

PATRICK BOND, DIRECTOR, CENTRE FOR CIVIL SOCIETY: Thanks. Good to be back, Jessica.

DESVARIEUX: So, Patrick, the Association of Mineworkers and Construction Union recently called off a five-month strike. Why did they go on strike, and why did they decide to call it off?

BOND: It was largely a wage strike, and they’ve been out five months, 70,000 workers. So it’s the longest and largest mineworkers strike in the country’s history. The basic demand was to move the pay scale up to about USD 1,100 a month. They basically started at 450 and have a potential wage increase that will get there by 2017. And the precise details for the lowest-paid of the mineworkers–these are called the rock drill operators, who really at the [incompr.] there with heavy equipment and great danger–silicosis dangers as well, long-term dangers. It was a 20 percent increase with inflation of 6 percent, so 14 percent in real terms–quite a breakthrough, even though in the process they lost about $1 billion of wages over these five months.

DESVARIEUX: So, as you said, 14 percent increase if you take in account for inflation. So do you see this as a clear victory for these mineworkers?

BOND: Well, not a victory, in the sense of a net financial gain, because after five months, not only did the wages decline, but the credit that many of these workers had to survive on, what are called mashonisas, loan sharks, who are informal, unsecured credit providers. They’re now going to be squeezing very hard with high interest rates. So it is certainly financially a very costly exercise, but one that the workers unanimously decided on, even though there were some trade unions, two other unions, including the National Union of Mineworkers, formerly dominant here, who had agreed for single-digit increases. And so workers could have gone back, but they were quite extraordinary in staying united.

And the number 20 percent, the victory, will probably resonate the way it did two years ago. You’ll recall that the Marikana massacre, 34 of these same mineworkers, in the same sector, in Marikana, Lonmin the employer, those workers who survived the massacre stayed on strike another month afterwards, and they want 22 percent, and that in turn created a very, very strong incentive to go on strike, a wildcat strike wave that spread across South Africa in September, October, November 2012, leading–in some cases they’ve–the vineyards of the Western Cape, where our delicious wine is made, a 59 percent wage gain by workers. So this could go much further if the momentum from today’s strike victory continues.

DESVARIEUX: And now there’s even talk of one of the country’s largest unions, the National Union of Metalworkers of South Africa, on NUMSA, as the acronym is, they’re threatening to strike on July 1. What are they demanding, exactly?

BOND: It’s indeed very likely that NUMSA, the biggest union, with 440,000 members, nearly half of those workers are in the engineering sector, and they are unable to come to a wage agreement with SEIFSA, the federation of the employers of engineering firms, and they’re looking for double-digit increases as well, and they probably will be not only on strike, but very, very militant and ready to also make very strong demands and organize well and across the country demand a sort of solidarity. And with a much, much larger strike [incompr.] this could be a formidable strike starting next Tuesday.

DESVARIEUX: It’s interesting, Patrick, ’cause the way that this strike is being covered in the United States, it’s really seen as sort of an economic loss for South Africans, because workers lost $1 billion in unpaid salaries due to this five-month strike, $2 billion of revenue was lost, and one of the smaller platinum producers in South Africa, Lonmin, says that they will have to cut jobs in order to continue production. So even some government officials are pointing towards these facts, saying that the strikes are hurting the economy, they will lower interest rate and foreign investment. And, in fact, the mining minister is saying that changes need to be made to labor laws in order to allow companies to have more power to end strikes. So, Patrick, some would argue that at the end of the day there are negative effects to the economy because of these strikes. So should there be some restrictions on strikes?

BOND: Yes, the economy certainly has taken a hit, perhaps a 2 percent decline in GDP because of the strike, according to some. The economy is about to go formally into a recession. And last week, Standard & Poor’s and Fitch, two of the rating agencies, downgraded South Africa’s credit just above junk status. But you have to recall that the government and the mining houses have been in a degree of collusion that is quite disturbing, maybe most extreme the Marikana massacre. And so we’re going to certainly see a great deal of posturing about the need to discipline labor and to relax some of the gains that labor’s won, in especially the Labour Relations Act. That may mean restrictions on strikes ahead.

However, on the other side is a growing cohesion of a left that now includes a parliamentary force. Six percent of the voters have supported the Economic Freedom Fighters in last month’s election. And that’s, last week, as they started parliament, been a very explosive equation as this EFF, led by Julius Malema, actually reminded the African National Congress of its role in Marikana and were promptly thrown out of Parliament.

On top of that, AMCU, the big mineworkers union, and the huge metalworkers union with their big strike, added to which are community protests that continue, represent at least four major challenges to the ruling party from the left. And even though the ruling party won 62 percent of the vote in the election, this African National Congress is going to be in an unprecedented way challenged again and again by multiple forces.

The big question in the coming months and before the next municipal election two years from now is whether a united front will emerge of labor and community and social movements, women and environmentalists, and whether that will next year lead to a much bigger party of the left, a workers party, as the metalworkers have suggested they’d like to see.

DESVARIEUX: Alright. Patrick Bond, regular contributor to The Real News, it’s always a pleasure having you on. Thanks for joining us.