Patrick Bond: A massive protest could push Obama to stop the Tar Sands pipe line and shift climate debate away from market solutions

Patrick Bond: A massive protest could push Obama to stop the Tar Sands pipe line and shift climate debate away from market solutions 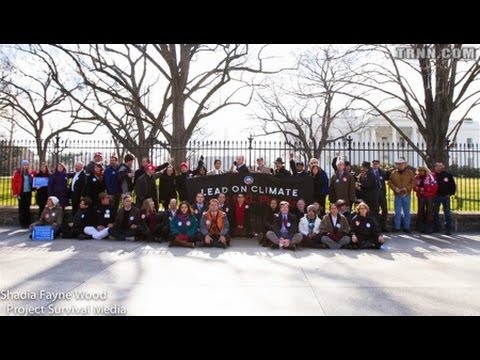 PAUL JAY, SENIOR EDITOR, TRNN: Welcome to The Real News Network. I’m Paul Jay in Baltimore. And welcome to The Bond Report with Patrick Bond, who now joins us from South Africaâ€”Johannesburg.

Patrick’s the director of the Centre for Civil Society and a professor at the University of KwaZulu-Natal in South Africa. He’s also the author of the recently released books Politics of Climate Change Justice and Durban’s Climate Gamble.

PATRICK BOND, DIRECTOR, CENTRE FOR CIVIL SOCIETY: Great to be with you again, Paul.

JAY: So this weekend will be the big protest about the tar sands and the pipeline. I assume you’re all over that.

BOND: It’s a very important day for activists to show muscle. And they began that, in fact, on Thursday with the arrests of several high-profile activists, as well as the politicians and some well-known actresses like Darryl Hannah. There’s Julian Bond there, especially Michael Brun from Sierra, and Bill McKibbons, being the key organizer from 350.org. And that’s the spirit, really, that’s I think going to be required, a persistent nuisance factor from very important personalities.

But if that’s not backed up by mass actionâ€”and here on Sunday we will see whether in Washington tens of thousands will join to protest the tar sands imports. And that will be, as James Hanson, a great climate scientist put it, a real carbon bomb if Barack Obama goes ahead and authorizes and constructs this big pipeline from the Canadian tar sands.

JAY: So theâ€”just quickly, again, why is this such an issue, the pipeline and the tar sands?

BOND: Well, as you know, with Barack Obama’s State of the Union address, he certainly pushed the idea that energy security for the United States was critical. And that means not just the import from Canada, a much safer site than the Middle East or Africa, but of course it’sâ€”.

BOND: That’s right, and easier, because it’s just a pipeline, easier to extract, although, of course, the actual extraction process is amazingly destructive and requires a vast amount of energy just to get some energy out of it. And I think the other factors that Obama mentioned were fracking will increase, the export of coal from the West Coast, deep offshore drilling, the kind of things that got BP into such trouble, such that they’ve basically been banned from new drilling.

And these are the sorts of things that on the one hand will mean Obama’s rule for the next four years will be characterized by much greater emissions level. On the other hand, he did say that there would be some executive authorities he can impose to try to bring emissions down through more efficient energy, trying to get methane out of various production processes. And then, if the Congress doesn’t comply by passing the legislation he wants, he can actually move in and direct the power plants to cut their emissions directly, and automobiles as well, through the EPA.

JAY: But he didn’t quite say that’s what he was going to do. I mean, in theory, he could do, but he seemed to beâ€”actually, instead of saying what he said, let’s take a look at what he said.

BARACK OBAMA, U.S. PRESIDENT: Now, the good news is we can make meaningful progress on this issue while driving strong economic growth. I urge this Congress to get together, pursue a bipartisan, market-based solution to climate change, like the one John McCain and Joe Lieberman worked on together a few years ago. But if Congress won’t act soon to protect future generations, I will. I will direct my Cabinet to come up with executive actions we can take, now and in the future, to reduce pollution, prepare our communities for the consequences of climate change, and speed the transition to more sustainable sources of energy.

JAY: So, I mean, it seemed to me his main thing he would act on, I thought, is what he calls market-based solutions, [incompr.] cap and trade. I didn’t get from that he was going to use executive action to regulate actual reduction. Did you?

BOND: Well, that would be indeed what his EPA administrator until last month, Lisa Jackson, was trying to do, by especially going directly to coal-fired power plants, and at one point even using the Clean Water Act to try to stop the mountaintop removal, blowing up of mountains in West Virginia, because they not only destroy the climate but also the water systems nearby.

So those would be the things that are possible with executive authority that the street heat on Sunday would then have to direct itself towards after the pipeline battle is either won or lost. And that’s the struggle for years ahead.

And the reason is because his desired legislation that he began back in 2009 with allies like Senator John Kerry, now the secretary of state, Joe Lieberman, especially the congressman Waxman and Markeyâ€”and they put a bill forward in 2009, and what they called for was a market-based strategy. And, of course, this was the worst possible time, with markets collapsing. And it’s called cap and trade, and in Europe it’s called Emissions trading scheme.

And what we’ve learned since 2009, which was around the peak for the European emissions trading scheme adventureâ€”and that was trying to sell carbon credits, so that if you cut back your pollution and then you have some extra, you can sell it to those who haven’t cut back. You’re selling in effect the right to pollute, if you can think of the air being privatized. Then big corporations have the power and the money to go and buy the right to pollute. And this even extends to places like South Africa, all over the third world, where clean development mechanism strategies to, again, buy the right to pollute from poorer countries have been in operation.

Have they worked? Not at all. And this is the extraordinary moment where Barack Obama should have been briefed that the European Union scheme has crashed by around 90Â percent from highs about â‚¬35 in 2008 down in the last couple of weeks to around â‚¬3 for some of the lower-price credits. So we’re really seeing a tremendous crash. Even the Chicago climate exchange set up by some of Barack Obama’s own former colleagues at University of Chicago, that crash was put to sleep, basically. It’s dead as of 2010.

The only real life in the United States is from California. Some of the other regional carbon trading schemes, these experiments have also floundered. And Californians, I think, are concerned that racism is built into this system, because it keeps some of the power plants and the polluters in neighborhoods of color still operating, because they can buy the right to pollute there.

JAY: How much is this being debated in the environmental movement? I know that it is, but, you know, on Sunday, when the big protest takes place, how much are we going to hear which we’ve been hearing over the last few days, that some environmentalists are so happy that President Obama just said the words climate change, which I understand why they are, ’cause he barely said them over the last four years? But if saying the words climate change and what it amounts to is the financialization of solving climate change and, you know, under this rubric of market-based, then how happy should they be?

BOND: Well, they should be sensible and ask: is it appropriate to let bankers solve the climate crisis when they can’t even run their own financial system? Because that’s effectively what’s happening. Institutions like Goldman Sachs are right at the core of this system, cap and trade, especially the proposals from 2009, 2010.

And this is exactly the right question to pose to these extraordinary activists like Bill McKibbon. Bill McKibbon supported a tax and dividend, which would have not been cap and trade, but rather a higher carbon tax that was paid back to the consumers by virtue of a cheque being sent to them every month. And now that’s the proposals that a couple of other senators put forward back in 2010.

So the question is whether these big environmental movementsâ€”and 350.org is now very impressive with its big divestment movement of students at over 230 campuses, and of course Sierra Club one of the big organizations as well. And these organizations really could shift the debate.

In earlier years they supported emissions trading, and there were many what we could call yuppy greens that think that if you’ve got a market problem, an externality, you can solve it with a market solution like a cap and trade scheme. And they say it worked for sulphur dioxide in a few select locationsâ€”Los Angeles about 20Â years ago. That’s debatable, because regulatory strategies can be just as effective. And Germany showed that with the acid rain problem from sulfur dioxide.

And so I think it boils down to whether progressives who’ve demanded climate justice and are suspicious of the Climate Action Network strategy that is insider legislative market-based, whether those climate justice activists can come back and make the point to the big group that comes out on Sunday that the future’s not going to be an insider-led legislation of the sort Obama wants to see happen, but rather in direct regulation to make the cuts that are going to be required to save the planet from global warming.

JAY: And just quickly, do you think a big mass protest like this could shift Obama on the pipeline, the tar sands pipeline?

BOND: Well, that remains to be seen. What Bill McKibben can claim is that the big protests that had 1,200 arrests in August-SeptemberÂ 2011 did force Obama to look at the issue, and he actually postponed decisions. Then, a few months later, he went ahead after the pressure was off. And Obama has said to McKibben and his ilk, make me do it.

And that is the pressure question: will McKibben not only motivate the tens of thousands to do more militant mass action civil disobedience again and again, as was done on Thursday, but will the rest of the United States citizenry wake up and understand that the tar sands is the first line in the battle to save the planet? And if they do, and if they are aware because of superstorm Sandy and droughts and floods and all of the other chaos in the United States but all over the world getting worse and worseâ€”300,000, 400,000 people dying each year due to climate change, the scientists sayâ€”then it is a matter of whether there is a democracy in the United States; and whether, as is often said nowâ€”with the last poll 64Â percent of those who are asked, do you want a market solution to climate change, they said no; and whether that voice can be made louder and louder, louder even than the corporations who are pushing Obama in the other direction.