South Africa and the Resource Curse 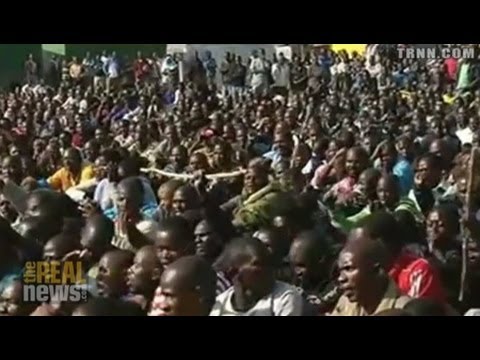 PAUL JAY, SENIOR EDITOR, TRNN: Welcome to The Real News Network. I’m Paul Jay in Baltimore. And please join us now for this week’s edition of the Bond report with Patrick Bond, who now joins us from South Africa.

Patrick is the director of the Center for Civil Society. He’s also a professor at the University of KwaZulu-Natal in South Africa. Bond’s an author and editor of the recently released books Politics of Climate Justice and Durban’s Climate Gamble.

Thanks for joining us again, Patrick.

PATRICK BOND, DIRECTOR, CENTRE FOR CIVIL SOCIETY: Great to be with you, Paul.

JAY: So what’s the big story this week in South Africa?

BOND: It’s really been mining, because South Africa for the 19th time has hosted the African Mining Indaba. Indaba is a local word for gathering. And these are thousands of the companies, the heads of state and state functionaries and the journalists who make up this huge industry that is responsible for so much environmental destruction and economic, social, and political degradation on the continent. And they gather every year.

And this year was especially important, because there’s been such a roller coaster, especially with the single biggest sector, platinum, here in South Africa. It was the largest firm, a couple of weeks agoâ€”that’s Angloplatsâ€”announcing 14,000 layoffs right in the area of the Marikana platinum fields, where there was a big massacre last August. The commission into the massacre’s been continuing with more revelations about emailing that actually catalyzed the police and the mining ministry to intervene and to get the mineworkers off that famous hill where they were trapped and 34 murdered over the course of a few minutes last August 16.

But, you know, the company involved there, that was Lonmin, third-largest platinum miner. They’ve made an extraordinary comeback. In the last couple of weeks, they’ve announced that they had a huge increase in production after the mineworkers settled the 22 percent wage increase, Paul. And what that means is that there’s suddenly a jockeying in this sector, and the largest firm, Anglo, was rapped over the knuckles very strongly by the South African government and by the mineworkers and is now beginning to come to the table. And there is also talk, although there’s no nationalization of mines, that certainly what brought Anglo was a threat to review their mining license.

So we’re really seeing an intensification of class and state capital struggles over mining. And the most exciting moment probably last week, Tuesday, was when Joe Seoka, the bishop from Pretoria who is very much a leader and very present with the mineworkers at Marikana, went and led a march against the mining indaba, insisting that on environmental and social grounds they clean up their act.

JAY: Why would one of the companies seem to be profitable, Lonmin, and the other losing money in the same fields?

BOND: Well, it’s partly because Lonmin had such a huge loss. They lost around 90 percent of their share value, so they’ve had to come up naturally as a sort of bounce-back. And no one had much expectations that a company like thatâ€”by the way, a company once named in 1973 the unacceptable face of capitalism by British Prime Minister Edward Heathâ€”no one really expected them to make a comeback at all. And the workers certainly have remained militant, and many of them are claiming they didn’t get their full payment back, and they’ve been threatening strikes in recent days. So I think the situation’s quite fluid.

It also relates very much to whether key individuals like Cyril Ramaphosa, the Lonmin shareholder, probably the largest South African shareholder, nearly 9 percent, he in the meantime was made the deputy president of the ruling party, and pretty much a clear line of succession to becoming the next president after Jacob Zuma retires, probably in the year 2017. And so Cyril Ramaphosa very present in the debates about what to do about mining and very much mining industry representative. And the other key figure this last week, a woman called Mamphela Ramphele, who is the chair of Goldfieldâ€”it’s a big gold mining operation which also is downsizingâ€”and she used to be the World Bank managing director for poverty, a neoliberal, a very controversial former partner of Steve Biko, the great black consciousness leader.

JAY: I was about to say, aren’t both of these figures former activists?

BOND: Indeed. Ramaphosa was the National Union of Mineworkers leader who actually led in 1987 the first big mine strike that was a national strike and really shook the apartheid regime and its corporate friends.

And Mamphela Ramphele was banned by the apartheid regime and then did her doctorate at the University of Cape Town and became the presidentâ€”what we call the vice chancellorâ€”of that university before going to the World Bank. And now she’s a venture capitalist and sits on the boards of a number of companies and does a great deal of public intellectual work and will start a new political party in coming days. That party, lining up to the right of the African National Congress, probably will pull away some of its middle-class support.

So it’s an interesting time in terms of the fluidity in the political system, even though we don’t really have an election scheduled here till 2014.

JAY: And what do you make of the arc of people like these two individuals we’re talking about, who were activists in the fight against apartheid and are now essentially multimillionaire big capitalists who are fully pushing neoliberal economics and politics? I mean, is it that when they fought against apartheid, it was really a fight against racism for them and not for any kind of more equitable social-economic system? I mean, how do you getâ€”or is this cynicism and corruption now?

BOND: Well, both are extremely ambitious. And in the sense that they’veâ€”they’re probably about the brightest people of the anti-apartheid generation. You could name maybe a dozen and they would certainly be there. But that ambition goes, in a sense, personality-wise, with the flow, and that’s crony capitalism in this country. It’s a corporatist arrangement where big business and the big government, along with some factions of big labor, including the mineworkers, have settled into a fairly easy relationship in which there’s a revolving door.

So, Paul, it’s not so much, as one, you know, might initially think, a sellout or a complete change in ideology, but a natural evolution that many of the sharpest people in the anti-apartheid movement decides where they can make money and exert influence. And I think to both their credits, they’re leaving the business world behind.

Both are now quickly resigningâ€”for example, Ramaphosa now resigning from Lonmin so that he can be a full-time politician and not be encumbered by the hugeâ€”I mean, he’s worth about $600 million at least, and he’s therefore probably able to put most of his holdings into a blind trust and come out of whatever political experience he has still the second-wealthiest black man in South Africa, probably about the fourth-richest overall. And although Manphela Ramphele had many other possibilities as the World Bank managing director for poverty, she could certainly have stayed in the multilateral system. I think, for both of them, exerting power and being very frustrated with the way in which the South African government has degenerated with the corruption at the top of the governmentâ€”and I think in some ways these are real valid efforts by ambitious people to exert more political influence.

However, the problem is that they are doing so within a context of corporate, state, and some big labor relationships which have had this terrible environmental, social, labor, economic, and I think political degeneration. And that’s the resource curse, writ large here. We’ve seen many other examples. You could argue that the Central African Republic intervention in January by the South African government, 400 troops going to back up a dictator there, was because South Africa has uranium interests there. In fact, the deputy foreign minister acknowledged such.

So we’re beginning to see South Africa in the same way France in Mali in recent days has gone in, probably to protect the interests of uranium in that vicinity, uranium producers for the big French nuclear plants. And so mining again plays this environmentally destructive, but also politically degenerative role. And that’s what we saw with the African mining summit here in Cape Town, where so many very wealthy people came and made no concessions, really, whatsoever to the reality that the gig is up, that people understand much more, after the Marikana massacre, what kind of damage they’re doing.