Patrick Bond: Mine workers strike and moving away from the African National Conference could signal a reconfiguration of the left in South Africa

Patrick Bond: Mine workers strike and moving away from the African National Conference could signal a reconfiguration of the left in South Africa 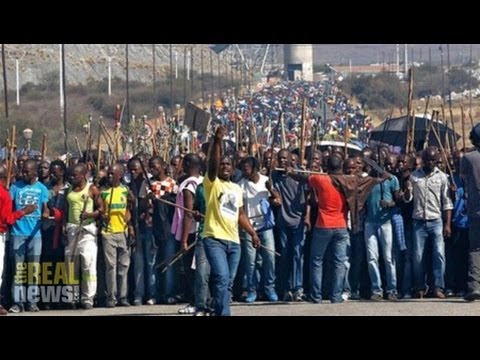 In South Africa, miners have rejected a 9 percent wage increase offer from the platinum industry as their strike enters its second week. Tens of thousands of members of the Association of Mineworkers and Construction Union, or AMCU, walked off the job last week to protest harsh working conditions. They are also asking for a living wage that will double their current wages. Tensions have been high between the sides, with the media reporting several acts of violence in mining towns.

This is the largest strike in the mining sector since the Marikana strike in 2012. South Africa is the leading supplier of the world’s platinum, and the strike is expected to take a toll on its economy.

Now joining us to discuss all this is Patrick Bond. Patrick is the director of the Centre for Civil Society and professor at the University of KwaZulu-Natal in South Africa.

PATRICK BOND, DIRECTOR, CENTRE FOR CIVIL SOCIETY: It’s great to be back. Thanks, Jessica.

DESVARIEUX: So, Patrick, apartheid ended in South Africa two decades ago, yet we still have low wages, harsh working conditions, and extreme inequality. So can you tell us why these workers are on strike? And what are their demands?

BOND: Well, you’re exactly right that the background is one of desperation. It’s–April 27, 1994–the twentieth anniversary of our liberation coming up. But unemployment is quite a lot higher, about 10 percent higher than then. And the inequality rate, the GINI coefficient, is much higher. Poverty is about the same. So in this context, those who have jobs often need to feed quite a few more people.

In the case of mineworkers, the migrant labor system of apartheid continues. And indeed for the Marikana platinum miners and the others in the Platinum Belt, they often have a family locally plus back in their original home areas, the old bantustans. And that, plus the credit system being completely out of control and massive consumer debt–what are called mashonisas (loan sharks) here have really taken away the pay packets through stop orders, garnishee orders, on these miners’ salaries. So they’ve been demanding an increase from around $400 a month for the starting wage to a starting wage of about USD 1,100. And the big platinum companies don’t, obviously, want to give that kind of concession to some 70,000 workers now on strike. And the price of platinum’s gone up because of the anticipated supply constraint, since South Africa supplies 80 percent of the world market.

The share prices of the companies have gone up, but the South African economy is crashing. Our currency, along with, I suppose, the Argentine peso, really lead the fragile five economies. South Africa was once considered a rising BRIC, one of the Brazil-Russia-India-China-South Africa new bloc, the BRICS bloc.

But it’s a very tumultuous situation, and it’s also with memories a year and a half ago of the massacre of 34 mineworkers in the very same space where this strike is going on. It’s really reminded many in the working class of the need for quite dramatic changes in the political configuration, with an election probably in May, a national election, and with the largest union having just broken away from the ruling party. That’s the metalworkers union, the National Union of Metalworkers, NUMSA. There is a great fluidity that I haven’t seen in my 25 years living in this country.

DESVARIEUX: You mentioned Marikana and the massacre that took place there. Can you speak a little bit more about the significance of the strike being launched from that location?

BOND: It’s so significant because no one’s really found out who ordered these shots to be fired and under what conditions, though for about a year we’ve had a commission looking into this, the Farlam Commission, and it has unveiled some secret police video and emails that are very, very incriminating for the police, because it seems now that instead of the original media reports from August 2012, in which the mineworkers were allegedly charging the police with their machetes, their knives, and then were mowed down by automatic police fire, instead those workers now, with new video tape that was previously unavailable, were actually walking more casually and then began to panic as they saw barbed wire being rolled out. And that Farlam Commission investigation also showed the number-two man in the ruling party, Cyril Ramaphosa, formerly a mineworker leader, having sent some emails–again very incriminating–as a 9 percent owner of Lonmin, the main company under strike at that time, that company then calling in the police, calling in the mining minister. In other words, a very important connection–maybe collusion is the proper word–between big business, big government, and a police force that then, and still today, seems ready to shoot to kill.

Indeed, Jessica, in the same municipality as Marikana, two weeks ago people who were protesting because they didn’t have any water for weeks were then mowed down. Four were shot dead by police–what is reported to be a peaceful protest–another protester shot dead just west of Johannesburg in another mining community last week, and then two days ago two more civilians shot dead in protests against police in another agricultural area north of the mining belt. In other words, the police are now seeming to be quite panicky, using automatic fire, not rubber bullets or tear gas, at the slightest provocation. It’s a very, very dangerous time to be an activist in South Africa.

DESVARIEUX: And, Patrick, I want to speak about the government’s role in all of this and specifically speak about the African National Congress. What is their position on the strike, and what is motivating that position?

BOND: Well, they’re very closely aligned, through the so-called alliance, the big alliance of trade unions, the Congress of South African Trade Unions and the Communist Party and the African National Congress. Critical in that alliance, the glue, really, is the National Union of Mineworkers. Indeed the current general secretary, the sort of political manager of ANC, was a former leader, and indeed the country’s deputy president, Kgalema Motlanthe, was also a former NUM leader. And the new, the incoming deputy president to Jacob Zuma, Cyril Ramaphosa, the man with the Lonmin connections, also had been a NUM leader. So this is the union to have a ladder into government.

And as a result, it seems that this union, which has become very cozy with big business–some call it really the sweetheart union–this union is panicking. It’s lost tens of thousands of its members, who feel that the leadership are too close to corporations and too close to the government. And as a result, from being the largest union in South Africa about a year ago, NUM has now descended to about number four. And what that means for the ANC government is they’ve really lost the confidence of organized workers, at least a large fraction, represented perhaps best by the National Union of Metalworkers, NUMSA. And with the walkout about a month ago of NUMSA away from the ANC alliance, what we now see is a reconfiguration of the left.

This week, NUMSA is holding meetings all over the country, and especially in Johannesburg on Saturday, with its social movement partners that I think in the coming months, maybe years, will become, as it’s been called, the united front of the independent left. So we’re seeing, really, a configuration of independent civil society, social movements, these very, very prolific protesters–last year there were about 1,800 protests that turned violent, according to police statistics. So we have community protests going on–about 30 per day, many of them turning violent.

And these protests are the stuff of what we call popcorn–they pop up, they fall back down. And what they have lacked is the sort of coherence that a major trade union, with its experience of democratic shop floor organizing, has typically given community activists. Twenty-some years ago, every community group that was protesting was invariably led by a seasoned trade unionist. And in the 1990s, many of those trade unionists had better wages. They moved out of the lowest-income communities. And as a result, what we’ve seen in the last few years: huge uprise, protests, but without much direction and no ideology. And that may now change.

On Saturday, a struggle exposition is going to take place in Johannesburg, hosted by the metalworkers, to try to compare notes amongst hundreds of the leading activists in South Africa. And that may mean that the ANC, not in the coming election, but in future elections, municipal elections in 2016 or national election, 2019, may be faced with the Workers Party. Currently, they’re faced with one political threat from the left, the Economic Freedom Fighters, led by Julius Malema, who was a very militant youth leader in the ruling party, and he was kicked out, partly for corruption, but mainly because he questioned the conservatism in the ruling party. And this all means that on the left, quite a lot of explosions are happening. Some say this is the transition from the so-called war of position to a war of movement, to use the terms of Antonio Gramsci. And meanwhile on the right, this week has also seen a merger of the two main classically liberal or, some may say, neoliberal free-market oriented parties, one led by Steve Bico’s former partner, Mamphela Ramphele, the other by the traditionally white centrist party, the Democratic Alliance. And that may mean that this right wing could consolidate some 20 to 25 percent of the vote, and in the May or June election (it’s not yet been called), the ANC may fall from 66 down to the low 50s. And that remains to be seen, but to me it would appear likely that the ruling party is now possibly going to start fragmenting quite badly.

DESVARIEUX: Well, Patrick, we’ll certainly keep tracking this story. Thank you so much for that update.