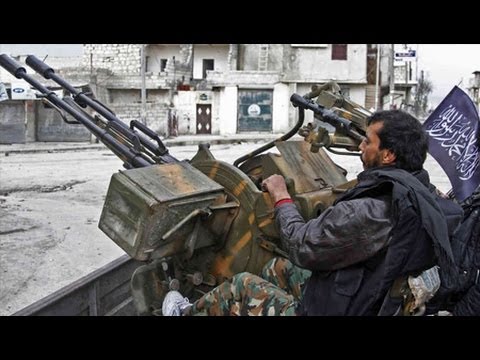 JAISAL NOOR, TRNN PRODUCER: Welcome to The Real News Network. I’m Jaisal Noor in Baltimore. And welcome to this week’s edition of The Bennis Report with Phyllis Bennis, who is now joining us from Washington, D.C.

Phyllis is a fellow and the director of the New Internationalist Project at the Institute for Policy Studies in Washington. She’s the author of the books Before and After: U.S. Foreign Policy and the War on Terrorism and Understanding the Palestinian-Israeli Conflict: A Primer.

Thank you for joining us, Phyllis.

PHYLLIS BENNIS, FELLOW, INSTITUTE FOR POLICY STUDIES: Good to be with you.

NOOR: So, Phyllis, what’s your response to this latest news reported by the Associated Press that the Obama administration is getting closer to arming Syrian rebels?

BENNIS: It’s a very dangerous development. This has been in the works for a while. The Obama administration is quite divided. And the fact that the latest appointees to the new administration–Susan Rice as the new national security adviser and Samantha Power as United Nations ambassador–both of those two are at the core of the component of the Obama administration and its supporters who have supported from the beginning a much more aggressive military role for the U.S. in Syria. They were the ones who led the campaign to get the U.S. involved militarily in Libya, and they’re up to the same thing in Syria.

There’s other developments that are quite dangerous. The fact that the European Union voted–well, they didn’t actually vote that way, but since every country has a veto, they were not able to vote to maintain their embargo on military aid, direct military aid to arm the rebels. And so as of July, European Union countries will be legally allowed to send weapons to whoever they want in Syria.

More recently, just in the last few days, we’ve seen 5,000 U.S. troops, as well as a group of Patriot missiles, sent off to Jordan on the Syrian border for a long-planned but conveniently timed, let’s say, military exercise that’s involving troops from a number of countries. But it’s quite likely that at least some of those troops and all of the Patriot missiles that are being sent will be remaining in Jordan after the two-week long exercise is over as part of the preparation for a possible direct military intervention.

The problem here, of course, is that they’re acting as if there is a military solution in Syria when in fact there is no military solution. And the possibility of negotiations in Geneva, something that the U.S. and Russia jointly have been working towards and calling for, is now looking less and less likely, with moves towards escalating the arms sales on both sides.

Russia is of course saying that it is going ahead with sending the S-300 antiaircraft missiles to Syria, although it’s clear that the fact that they have not sent them yet–they are saying that it will be September or so before they are sent; it will be another several months before Syrians are fully trained in how to use them. In that context, it means that the Russians are not rushing ahead to continue arming and to escalate their arming of the Syrian government. That’s a moment when the U.S. could move to escalate the diplomacy instead of escalating the militarization. Unfortunately, it doesn’t look like that’s the position of the Obama administration right now.

NOOR: So, Phyllis, if E.U. countries, the United States, and Russia are all to send weapons to Syria in the next few months, what might the situation on the ground look there? Already you’re seeing reports daily of dozens of people killed. Could it get any worse?

BENNIS: It can absolutely get worse. And it probably will, unfortunately. The reality is that civil wars–and this is partly a civil war. It’s also now a proxy war. There’s actually five separate wars being waged in Syria. But part of it is a civil war. Civil wars, if one side doesn’t qualitatively destroy the other, end with negotiated settlements. The question is: do those negotiations begin now, or do we wait until there’s another 70,000 or 80,000 or 100,000 Syrian casualties before going ahead with negotiations?

The idea that the U.S. can make things better by sending more arms to this unaccountable, divided, and not particularly competent set of rebel forces when they have essentially wiped out the voices of the original indigenous Syrian opposition, those who started the uprising against a terribly repressive regime but who said from the beginning they don’t want this to be an armed struggle, they don’t want U.S. or any foreign intervention militarily. Those people, those voices have largely been sidelined by the noise of the military battle. But the idea that somehow there is going to be a definitive victory for the rebels against a far better armed army of the Syrian regime is simply wishful thinking. It’s just not going to work that way.

The lesson of Libya, which is probably the closest immediate precedent to this, is that the situation in Libya right now is a disaster. The newly opened porous borders of Libya have seen massive numbers of fighters on all sides of all kinds of militias, and especially of weapons, throughout Mali, Niger, Algeria. The entire swath of the Sahel in northwest Africa is at risk now as a result of the US-NATO intervention and the overthrow of Gaddafi in Libya. That’s the best that they can hope for, that it will be that kind of chaos. And that’s in a scenario where the actual fighting and the forces involved were internal to Libya.

What we now have is major engagement from Saudi Arabia and Qatar supporting opposing sides of the Islamist opposition, the British and the French saying they plan to arm and the U.S. saying maybe will arm the supposedly secular opposition, who are by far not the good fighters. The good fighters are the various Islamist forces.

So this is a war that has already spilled over its borders. You’re seeing massive destabilization in Lebanon, in Jordan, refugee crises in those two countries, as well as in Turkey and the entire area surrounding Syria. So this is already a regional and indeed a global crisis. Further escalation of the military fighting is certainly not going to make it any better.

NOOR: So, Phyllis, we see members of the Democrat and Republican Party beating the drums for war and intervention in Syria. The Obama administration says they’ve ruled out boots on the ground in Syria. But what role can grassroots activists play in helping promote a diplomatic solution?

BENNIS: I think the key thing is to keep focusing on the fact that already about 68 percent or more of the American people are saying no to military intervention. There’s a recognition that this is not going to make us any safer the world and it’s not going to make any Syrians any safer in the world. This is a political move. It’s not one that has the support of the American people.

What we need is real diplomacy. We need a new foreign policy that is not based on military intervention and arming either governments or militias as a way of maintaining U.S. power. The danger we have right now is that U.S. power in the diplomatic arena, in the political arena, even in the economic arena is on the decline in the Middle East. U.S. influence is on the decline in the Middle East. The only arena of power in which the U.S. is by far the only–the unchallengeable superpower is in the military arena. And so the danger is that’s what they’re going to use. It’s the old hammer and nail argument. If you’re a hammer, everything looks like a nail. If all of your instruments except the military have defunded and as a result have collapsed, you’re going to think that every problem needs a military solution. The problem is thinking that doesn’t make it so.

We need to demand an end to the militarization, working closely with Russia to make sure that Russia does the same thing, stops arming the regime, and make sure that the U.S. position of the moment, which is that Iran is not allowed to participate, that that decision is changed, because if Iran is excluded, it means that you’re guaranteeing that any diplomatic solution reached won’t work, because Iran will not have skin in the game. They will not have any reason to abide by a decision that they were not allowed to participate in.

So I think that we need to keep the focus on demanding a diplomatic rather than a military solution, no U.S. militarization. Saying there won’t be troops on the ground is not good enough.

There will be massive bombing. The Syrian antiaircraft capacity right now is far greater and stronger than that in Libya. It’s divided and spread out around the country. And that means that there will be massive numbers of potential casualties, civilian casualties when the U.S. bombs those antiaircraft batteries wherever they may be throughout the country. We have to say no to that.

This is not going to be fought with drones. This is going to be fought with planes, with bombers, with missiles, with helicopters. And when the first pilot is shot down and is captured, there will be boots on the ground. Maybe it will be sneakers rather than boots, because special forces guys wear sneakers. They don’t wear boots. So maybe that’s the technicality where they say there won’t be boots on the ground. But this is a risk that is already underway.

It also has to be clear that it’s not enough to say no troops on the ground, no boots on the ground. We cannot be involved militarily by bombing, by sending missiles in another war in the Middle East–or anywhere else, for that matter, but right now we’re talking about in the Middle East. This is the heart of the Middle East. This is a disaster that is already underway and that threatens to become far worse as it spreads regionally. Saying that there won’t be U.S. soldiers is not good enough when the whole world knows that it will be U.S. bombs dropped by U.S. planes, hellfire missiles fired by U.S. helicopters.

This is not acceptable. This is illegal without a United Nations resolution. There’s no way anyone can argue that this has anything to do with self-defense. And the argument that this is supposedly humanitarian is grounded in the need for a United Nations Security Council resolution authorizing military force. There has been no such resolution, and there will be no such resolution. This will be one more example of the United States directly violating international law.

NOOR: Thank you for joining us, Phyllis.