US Money and Policy Makes Israeli Attack on Gaza Possible 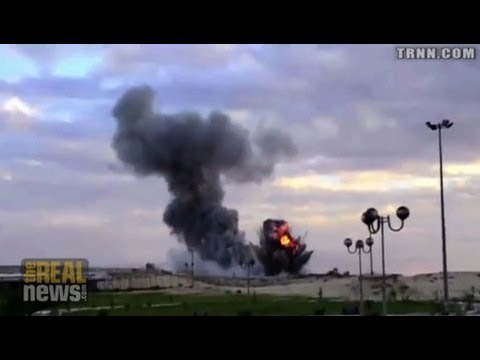 PAUL JAY, SENIOR EDITOR, TRNN: Welcome to The Real News Network. I’m Paul Jay in Baltimore. And welcome to what is now going to be the first of the Bennis reports with Phyllis Bennis. She will be doing weekly reports on international issues. And she now joins us from Washington, D.C.

Phyllis is a fellow and director at the New Internationalism Project at the Institute for Policy Studies in Washington, D.C. She’s also the author of the books Before & After: U.S. Foreign Policy and the War on Terrorism and Understanding the Palestinian-Israeli Conflict: A Primer. Thanks for joining us, Phyllis.

PHYLLIS BENNIS, FELLOW, INSTITUTE FOR POLICY STUDIES: Great to be with you, Paul.

JAY: So, obviously, you’re going toâ€”the story this week is about Gaza. What has struck you?

BENNIS: Well, you know, I was struck by the statement a day or two ago by the Israeli defense minister, Ehud Barak, when he talked about the role of the United States in all this. And he said, and I quote, “This effort could not have been concluded without the generous and consistent support of the American administration, led by President Obama,” end quote. That’s a rather extraordinary thing to say, because on the one hand, it sounds like an introduction to a speaker or something like that. On the other hand, it’s an admission of complicity, that he’s saying the U.S. made it all possible.

Now, anybody in Gaza during those few moments of respite in between bombing raids who managed to look out their window and survive would have seen the evidence. They would have seen U.S.-made, U.S.-paid-for F-16 warplanes, U.S.-made, U.S.-paid-for Apache helicopters, Caterpillar armored bulldozers, all those things made and paid for here in the U.S., paid for by our tax dollars. That’s not exactly a secret.

But when Israel is being excoriated around the worldâ€”everywhere except in the United Statesâ€”for obvious war crimes, obvious violations of the Geneva Conventions and other parts of international and humanitarian law, to say so blithely, couldn’t have done it without you, as if it was a great gift to President Obama, is really quite an extraordinary thing.

The reality is, right now, Paul, what we’re dealing with is a scenario where the U.S. ordinarily is prepared to call the shots in the Middle East. But suddenly there’s a new Middle East. The U.S. doesn’t have the same options that it once did. So if we look back four years ago, Operation Cast Lead, when Israel carried out an almost identical level of air raids against Gaza, followed at that time by a ground incursion that ended up, after three weeks of killing, with over 1,400 Palestinians dead, the vast majority of them civilians, and over 350 of them children, you know, that was something that the then-new Obama administration thought it could respond to. It had control in the Middle East. There was a dictatorship in Egypt that was dependent on the United States and would do whatever the U.S. needed it to do vis-Ã -vis Israelâ€”keep the border quiet, keep the Sinai under control, ignore what your people say about Gaza. But all of a sudden, Egypt has a democratically elected government. We don’t know exactly how far that government’s going to be prepared to go, but we do know this is not, as they say, your father’s Egypt. This is not the Egypt of Hosni Mubarak. This is an entirely different government that has to now pay attention to popular will and face elections, something that Mubarak never had to face.

Now, it doesn’t mean that the new position of Egypt means it’s going to join in a war against Israel or something like thatâ€”nothing so dramatic, hopefully. I mean, that would be an even greater disaster, of course. But it does mean things like reassessing what implementation of the Camp David Accord between Israel and Egypt should look likeâ€”doesn’t necessarily have to include, for example, what it includes now, the right, so-called, of Israel to buy Egyptian natural gas at discounted prices, for instance. Maybe that should be reassessed. Those are the kinds of considerations that we’re talking about.

JAY: In an earlier interview, you had made the point that this might kind of restrain to some extent Israel’s hand in Gaza in terms of full-out on-the-ground invasion, because it’s hard to see how Morsi survives that if he doesn’t take a very militant opposition to it, bothâ€”even internally in terms of the Muslim Brotherhood and generally the Egyptian population.

BENNIS: Yeah. I think that’s absolutely right. I think it has been part of the reason that Israel has not sent ground troops in, as bad as the air strikes have been. As lethal as they have been, it’s now over 116 Palestinians that have been killed in these seven days of air strikes so far. But the reason they have not sent in a far more lethal ground force has a lot to do with the fact that Israel is now much more isolated in the region and in the world.

You know, if you look at where are the solidarity visits going, they’re not going into Israel to go to Sderot, except for Hillary Clinton and one or two others. They’re going to Gaza. You know, who’s going to Gaza? You have the emir of Qatar. You have the Egyptian prime minister. You have the foreign minister of Tunisia. You have a group of parliamentarians sent by the Arab League. This is, you know, becoming a routine now for world leadersâ€”the leader of Turkey is goingâ€”to go to stand in solidarity with the people of Gaza under the Israeli bombs.

That’s an incredible shift from what existed four years ago, where you canâ€”I mean, ironically, right now the countries that the U.S. most needs to act as U.S. interlocutors in the region, Turkey and Egypt, are arguably Hamas’s closest allies. Hamas has broken with the regime in Syria. It hasn’t broken with Iran, but its relations with Iran are far more distanced than they used to be. And its close allies now are Turkey and Egypt, the same countries that the U.S. needs. So what does this say about the normalization of Hamas in the region? It’s a very different scenario.

Now, we should be clear that all of this does nothing to stop the killing that is going on in Gaza. This was a long-planned operation. You know, the head of the army, the head of the Israeli army, the chief of what would be the equivalent of the chairman of the Joint Chiefs here, the chief of staff for the army, General Gantz, said last year that very soon we are going to need what he called a swift and painful return to Gaza. He said that we’re going to need to remind the people of Gaza of the power of deterrence. So this operation has been long planned.

The only issue was going to be the timing. And that’s where we see the relevance of the U.S. election brings Barack Obama to power. This puts Obama in the position where Netanyahu knew that whatever the differences between them, however much friction existed between the two of them, that when Israel was going to be at war at its choice, the U.S. would absolutely come out and say exactly what President Obama has been saying: we stand with Israel; we will support Israel with whatever they do; Israel has the right of self-defense; the Palestinians have nothing; the Palestinians have bubkis. You know. And this is despite the violations of U.S. law, the U.S. Arms Export Control Act that prohibits the use of U.S. weapons provided to another country for illegal purposes, like being used against civilian targets, being used against a protected population, etc. None of that matters when Israel’s position is at stake.

But the problem for Obama right now is that that no longer matches the public opinion. Public opinion right now is very different. If we look at the polls taken just two days ago, there was a new CNN poll that among other questions asked: do you think that Israel’s operation in Gaza is legitimate? Four years ago, during Operation Cast Lead, when the situation was far worse, 52 percent of Democrats said yes, I think it’s legitimate. This time around, only 41 percent of Democratsâ€”a drop of 11 pointsâ€”said that they think that Israel’s role is legitimate. Now, that’s still way too high given what is happening in Gaza. For 41 percent to say it’s legitimate is an outrage. But the fact is the trajectory is going down. There is no longer popular unanimity on this question. And that’s something that President Obama fairly soon is going to have to grapple with.

JAY: Right. Thanks very much for joining us, Phyllis.