Should Progressives Vote for Obama?

Phyllis Bennis: Both parties represent big capital and corporations, but Romney will be even more aggressive against working people

Phyllis Bennis: Both parties represent big capital and corporations, but Romney will be even more aggressive against working people

Should Progressives Vote for Obama? 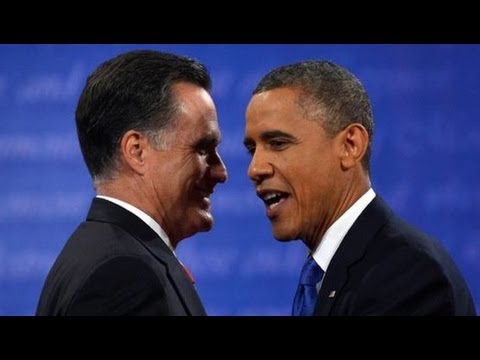 There’s a debate taking place on the left of the political spectrum about whether or not there’s really that much of a difference between President Obama and candidate Romney. It kind of goes that even in swing states, why vote for the lesser evil; it’d be better to vote for third parties, for example the Green Party or the Peace and Justice Party. The debate goes that there’s just not a significant enough difference between the two to kind of give credence to the fact that the leadership of the Democratic Party isn’t also representing Wall Street interests and such. Now, in foreign policy, is there enough of a difference to choose between the two?

Now joining us to have that discussion is Phyllis Bennis. Phyllis is a fellow and director of the New Internationalism Project at the Institute for Policy Studies in Washington, D.C. She’s the author of the book Before and After: U.S. Foreign Policy and the War on Terrorism. Thanks for joining us, Phyllis.

PHYLLIS BENNIS, FELLOW, INSTITUTE FOR POLICY STUDIES: Great to be with you, Paul.

JAY: So, I mean, I know you’reâ€”as a U.S. citizen, you’re as much interested in the domestic issues, so if you want to go there, go there, but your preoccupation is with foreign policy issues, and it’s hard to see in what little we’ve heard so far of foreign policy debate between Romney and Obamaâ€”but certainly in terms of their public positions, it’s hard to see a heck of a lot of difference between them. And so what’s your take on that?

BENNIS: Well, I think that there are differences.

Before I get to that, I think we have to start with what elections are and are not. Elections are not the embodiment of a real democracy in this country. Elections are not our turf. They’re not our team. They’re not our people. They’re not our choices. That’s not what’s presented to us for elections. So when we get to people saying both parties are controlled by the corporations, it’s like, yeah, and what’s your point? Because to me, that imagines an illusory world where we get to choose, we the people at large somehow get to choose the candidates and choose the issues and make real choices. That’s not what U.S. presidential elections have ever been.

JAY: Yeah. I think one of the people that put that best was actually George Will, the conservative columnist, whoâ€”I’ve quoted this a hundred times on The Real News and I will a hundred more timesâ€”on the Stephanopoulos show he lost his temper once and he said, let’s not get sentimental about democracy; you don’t get to choose whether the elite rules, you get to choose which part of the elite rules.

In this case, I think there are differences that are not small. The question of who gets appointed to the Supreme Court is the choice between whether we get a conservative centrist, which will be the likely choice of a second Obama term, or a right-wing extremist, which is the likely choice of a Romney presidency. That matters. It matters for women’s rights, it matters for the environment, it matters for labor. It matters whether things like Citizens United that gives corporations so much more power than they even dreamed of will be expanded or might be contracted. So for me, the issue of Supreme Court appointments alone would be enough.

On the question of foreign policy, clearly you’re right, Paul, that there are not major differences between the two parties. That’s part of the reason why I think we can expect that the debate over foreign policy is going to be a little bit tricky, because it’s going to be much more about rhetoric than about actual policies.

But let me start with where there is a real policy difference, and that’s on the question of Iran. Where they don’t differ is, between the two parties, both have established the idea of a, quote, “red line”, at which point they would be willing to use force against Iran. That’s a disaster. It’s a disaster when you set red lines, because it undermines any possibility that diplomacy is going to happen. But it doesn’t mean that all disasters are as bad or as soon or as likely as others. So if we look at the Obama administration’s red line, their red line has always been the same for U.S. administrations in the past: we will not allow Iran to get, to obtain, to have a nuclear weapon. Now, that’s disastrous, to assert that, as I said, but that’s way in the future. Nobody thinks that’s going to happen any time in the next several years.

JAY: Which is what Biden more or less saidâ€”not more or lessâ€”did say during the vice presidential debate.

BENNIS: Which is what Biden said. And President Obama has said that on numerous occasions as well.

Now, the position of the Romney team (it was said most explicitly by Ryan, but Romney has said it over and over again, and his staffâ€”when Romney has pulled back from it, his staff has reasserted it) is the Israeli red line, which is that we will use force to prevent Iran from getting a nuclear weapons capabilityâ€”that’s the key word. Now, capability is not a concept that exists with a clear definition in international law. It’s widely assumed to mean a combination of the ability to enrich uranium, which every country that manufactures its own uranium fuel for a nuclear power program like Iran’s has, as well as scientific know-how, which Iran mostly hasâ€”and they did even more before the assassination of five scientists in their nuclear power program. But the point is that when you say that the red line is nuclear capability, what you’re saying is, we can choose when to define that moment, and we could define it as today, we could define it as next week. That’s way more dangerous.

JAY: So I asked Chris Hedges this question, and Chris Hedges is someone who says don’t vote for Romney or Ryanâ€”I mean Obama or Romney. And he says these decisions aren’t really going to be made that way anyway; it’s the Pentagon, it’s the foreign-policy establishment. And it doesn’t matter the kind of rhetoric Romney uses, the real decision-making won’t be there, and that the Pentagon, as it stands now, doesn’t want war with Iran, and that’s going to be the more determining factor.

BENNIS: I think that’s true, as far as it goes. But I think that to ignore the real power of the presidency, which is the bully pulpit, is a specious argument. It really denies how power gets exercised in this country. The rhetorical differences actually matter.

So when you have a president that comes into office saying, we want to remake our relationship with the Arab world, with the Muslim world, with the rest of the world, who want to have a new relationship based on international law and the United Nations, etc., that gives you something to hold up as a goal, to hold a president, a party, a congressperson, a senator accountable. It’s something that you can make them accountable for if we build up our movementsâ€”this is where the role of social movements is fundamental. At the same time, if you have a president who’s elected whose official position is, I am going to reclaim our position in the world, being able to create history, we are going to determine history, we are going to tell other countries what they can and cannot do, which is essentially the public position of the Romney campaign, you’re in a much more difficult position to even try to hold politicians accountable.

And it matters what that rhetoric is, what people understand to be the national interest. If you have people that are listening to a presidency that is, with one voice, sayingâ€”and I don’t pretend that anybody running for office right now is going to say this, but if you had a presidency that is speaking with one voice saying, we are going to build a foreign policy based on international law and human rights and equality for all, as opposed to what our foreign policy has been in the pastâ€”.

JAY: Yeah, but you don’t have that with President Obama.

BENNIS: You don’t have that. You doâ€”that’s right. But you do have someone who’s saying, our foreign policy is based on ending wars that are stupid. Now, then you get into the debate of why is only Iraq the stupid war when 68Â percent of the American people say that the war in Afghanistan is not a war worth fighting, you can have the basis of saying that the drone expansion, the drone warâ€”there’s a basis for fighting it, for saying that’s not how you rebuild our relationship with the Arab world, the Muslim world, the rest of the world, that’s not how it works. If you haveâ€”if you elect a government who is committed to the assertion of power in its rawest force, it’s much harder to mobilize. It’s not because they represent peace and justice [crosstalk]

JAY: Well, the argument goes the other way, though. Like, you hear arguments from people like Glen Ford, who says that Obama actually can sell some of these policies in a way that a Republican couldn’t sell.

JAY: And that you also have this issue of Obama taking the wind out of the movement amongst the African-American community, but, even more broadly, amongst large sections that might oppose such things.

BENNIS: I don’t think Obama took the wind out of anybody’s movement. I think our movements made some wrong decisions collectively about how to respond to a new political moment. If there’s a new political moment, you can’t keep doing the same things and think they’re going to work. You know?

There was a lot of debate in the peace movement, for instance, whether what we needed was to continue what we had been doing, do it more, do it harder, do it stronger, do it better. That didn’t really work. It was based on the primacy of showing our strength through street actions, street demonstrations. The problem is, at a certain point we didn’t have strength to demonstrate, so what we were doing was demonstrating weakness.

JAY: So just as a final question, soâ€”I think I can see where the answer is, but I’m asking everybody the same question. So if you’re in a swing state, how do you vote?

JAY: So you vote Obama.

BENNIS: People will have different judgments about which candidate represent a lesser evil. If I were in a swing state, that’s how I would vote.

JAY: Okay. Thanks very much for joining us, Phyllis.

BENNIS: Thank you. Always a pleasure.