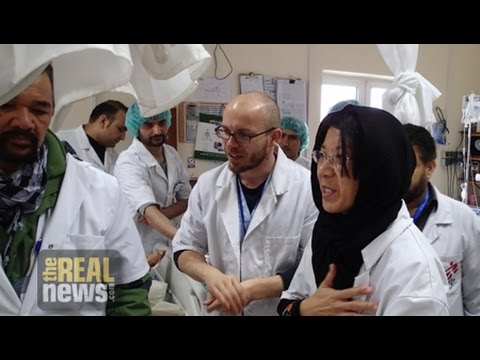 SHARMINI PERIES, EXEC. PRODUCER, TRNN: Welcome back to the Real News Network. I’m Sharmini Peries coming to you from Baltimore.

In Afghanistan the Taliban remains in control of about half of Kunduz, despite the U.S. aerial bombardment trying to prevent them from taking control of the city. This is in spite of the fact that General John Campbell, in a statement on Tuesday in front of the Senate, said that Afghan security forces have retaken control of the city. Kunduz is the city in which the U.S. military bombed the MSF hospital on Saturday in an air strike that killed 22 people, including 12 MSF staff. General Campbell has acknowledged that the bombing was an accidental strike. He said, to be clear, the decision to provide aerial fire was a U.S. decision made within the U.S. chain of command. The hospital was mistakenly struck. We would never have targeted a protected medical facility, he said.

He added that local forces in Afghanistan are uneven and inconsistent. Campbell is proposing an increase in U.S. troops to 7,000, coinciding with President Obama’s proposal to stay up to 5,000 troops beyond 2016. Just to remind everyone, the Obama plan originally before this had been revised many times. But the last proposal was to draw down the troops to just 1,000, limited to protecting the embassy by now.

Joining me now to discuss all of this is Phyllis Bennis. Phyllis is a fellow at IPS and directs the New Internationalism Project there. She’s the author of many books, among them Ending the U.S. War in Afghanistan: A Primer. Phyllis, good to have you after a long time.

PHYLLIS BENNIS: Good to be with you, Sharmini.

PERIES: So Phyllis, what do you make of all of this? The Senate hearings, Campbell’s statement, and the recommended troop levels?

BENNIS: Well, it’s a very dangerous development. What we’re really seeing is another major escalation in Afghanistan, just at the moment when the Obama plan called for a drawdown to the last 1,000 troops by the end of next year. That now seems to be going out the window. There now is talk of how many thousands should remain, how many more air strikes there should be. And all of this, of course, in the wake of this horrific bombing over the weekend where the one major trauma hospital available in the entire region up in the northeast of Afghanistan, Kunduz, was bombed and destroyed with the deaths, as you’ve mentioned, of at least 22 people. There’s others injured, we don’t know if all of them will survive. At least 12 of them were doctors, and other staff of Medecins Sans Frontieres. Three of them were children, the others were patients in the intensive care ward who literally burned to death in their beds because they couldn’t move. It’s just a horrific reality.

And we heard four different versions from the U.S. government and the Afghan government in the first four days since the attack happened. Now they seem to have settled on it was a U.S. strike, there was apparently an apology from President Obama to the director of Medecins Sans Frontieres, although the public statement from the White House was not an apology. It expressed condolences and regrets at the death. But it did not apologize. Now, apparently we’re hearing it reported that there was an apology. We haven’t heard that from Obama directly.

But more important, there is no question yet that the, there’s no, no good information yet about whether there will be any real accountability. This is a disastrous situation because what apparently happened, at least from the most recent information, it may change again, but the most recent information we have is that there was a call from Afghan troops claiming that they were taking fire, that they were under attack by the Taliban somewhere near the hospital, and they called in an air strike. And the U.S. said, sure, and waged an air strike directly on the hospital, on the main building. Not in the large compound area around it. And that’s what led to so many deaths and so much destruction.

And when one says, well, how could that happen? Why would anybody bomb this building? Why would the Afghans have called for air strikes on the hospital? We do now have some information about why that might have happened. It turns out that three months ago this exact hospital was attacked by Afghan military forces. U.S.-backed, U.S.-armed, U.S.-paid soldiers of the official Afghan military, who came in with their weapons, refusing the orders of the doctors and others who tell them there are no weapons allowed in this hospital. They came in, claimed that three of the patients were wounded Taliban militants, and tried to take them away. After an hour, and including firing into the air to intimidate people, they finally were forced to leave and the patients were allowed to stay. But there was a great deal of antagonism, not surprisingly. The Medecins Sans Frontieres was forced to temporarily halt its services at the hospital because of that kind of attack when they knew they couldn’t depend on local sources to keep the weapons out of the hospital.

BENNIS: Well, it’s exactly what you said. It’s havoc on the ground and the people paying the price once again are Afghan civilians. Once again this year we’re already seeing a rise from last year in the number of civilian casualties. Last year was the highest number of civilian casualties since the UN began tracking them six years into the war. We’re now, today is the 14th anniversary of the war, the day that we’re speaking. And we have to recognize that in this context the war looks like it is continuing, and it’s continuing to affect primarily civilians. All of the claims that we’re doing this, we’re going to war to protect the people of Afghanistan, we’re doing it to protect women’s rights, all of this becomes overtly false. It becomes directly false.

This war is now being waged, it seems, for political reasons that we can’t withdraw because it, it is quite clear that the war has not worked to create a military and police force capable of claiming and controlling all the territory and all the population. You have a major Taliban offensive underway where as you mentioned earlier a large percentage of the, of the territory of Afghanistan is now under either Taliban control or at least it’s being tested. The Taliban has gained supporters throughout this period, and like the period when the Taliban won the civil war in 1996, it won that support of the local population because it said, we are going to end the war.

It’s the war itself, far more than the existence of the Taliban, even with their horrific attacks on women, their rigid and often violent punishments. Even with all of that, people are saying that it’s the war that is such a problem and so devastating to human life in Afghanistan. So I think when we saw that in 1996, we’re likely to see it again now, that as the Taliban takes over the stability that they impose, however brutal it is, may be welcomed by a larger proportion of the population than anyone in Washington is prepared to acknowledge.

PERIES: And Phyllis, you have written the book on ending the U.S. war in Afghanistan. What do you think should be the next step if we are to have something like that we had achieved in Iran, in terms of a negotiated solution to the problem in Afghanistan?

BENNIS: Negotiations are going to be very complicated and very difficult, as we know. But there is going to be a negotiated solution eventually. The question is, do we have another year or two years or ten years of fighting and more civilians being killed before we get to the negotiations? Will there have to be Taliban representation at the negotiations? Of course they will. They will have to be part of it because they are one of the people in power.

And as we learned from former Sen. George Mitchell, who helped negotiate the Good Friday accords in Northern Ireland, the first lesson he took away, he said, was that if you’re serious about diplomacy everybody has to be at the table. Not because you like them, not because you think they’ve become a good guy. But precisely because if they’re not at the table they have no motivation to abide by whatever the decision is. They have no reason to accept the negotiated settlement. If they are left out you are telling them that they are outside the pale and they’re not obligated to abide by it. If we want the Taliban to be accountable to some kind of negotiations, they have to be at the table.

There’s going to have to be the involvement of all the armed forces as well, and this is crucial, of the unarmed civilian population of Afghanistan, something very difficult because there’s a tendency to look only to the Western-backed English-speaking NGOs that function in Kabul when the vast majority of the population do not live in the big cities, live in tiny villages scattered across a vast countryside. It’s not going to be easy to find the people who are truly representative of those populations. We’re going to have to have representatives of more religious forces than most of us would be comfortable with. But it’s not our representatives. We don’t get to choose who speaks for the people of Afghanistan. We don’t get to choose–shouldn’t get to choose–who governs the people of Afghanistan.

So we have to start with that level of humility. And we have to start by recognizing that what Colin Powell said during all the years of the wars in Iraq and Afghanistan, we broke it, we own it, claiming that Pottery Barn somehow is now providing military strategy. We have to go back and remember that the answer to that was to say no, this isn’t about Pottery Barn and breaking pottery. This is about saying, what happens when there’s a bull in the china shop who brakes all the cups? You don’t go into the china shop and ask the bull to fix the cups. You get the bull the hell out of the china shop and write a check for the damage. That needs to be the vantage point that we start with.

We owe a great debt to the people of Afghanistan. We owe reparations. We owe compensation. We owe humanitarian support. We don’t owe continued bombing, continued military occupation.

PERIES: Phyllis Bennis, thank you so much for joining us today.