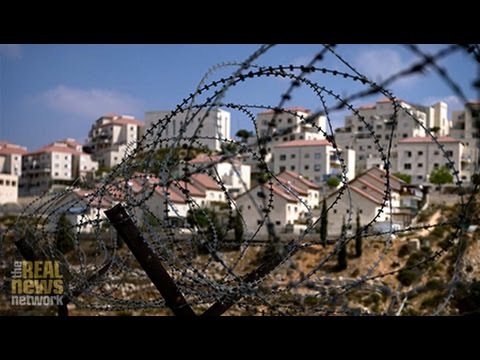 Which companies are doing business in occupied Palestine? That’s a key question that’s been essential to the Boycott Divestments Sanctions Movement known as BDS, which is trying to increase economic and political pressure on Israel to end the occupation and the growth of Israeli settlements. On Thursday, the United Nations Human Rights Council voted to create a blacklist of corporations doing business in the West Bank, East Jerusalem, and Golan Heights. The Palestinian authority and members of Arab nations put forth the resolution and the proposal did not receive any no votes. While 32 supported the move and 15 members states abstained from voting all together. Israeli Prime Minister Benjamin Netanyahu, criticized the decision calling the United Nations quote an anti-Israel circus which attacks the only democracy in the Middle East and ignores the blatant violations of Iran, Syria, and North Korea.

Now joining us to discuss all of this Phyllis Bennis. She Is a fellow and the director of the New Internationalism Project at the Institute for Policy Studies. Thanks so much for joining us Phyllis.

PHYLLIS BENNIS: Great to be with you Jessica.

DESVARIEUX: So first off Phyllis I’m trying to understand the significance of this vote. Why weren’t there any votes against this resolution especially since Israel is so vehemently against it?

BENNIS: Well the United States and Israel are not members of the Human Rights Council. The Human Rights Council is chosen is each year, member states within regional group vote from which of their states will be on the council at those years. Neither the U.S. or Israel is a member of the Council. No other countries on the council were prepared to oppose it although a number of Europeans and others did abstain. But there was clear majority with 42 votes in favor, it’s a very important symbolic vote. It doesn’t have any immediate impact. It doesn’t call for boycotts directly for example. But the fact that it took seriously identifying the companies that are operating in the occupied territories, in violation of international law is a very good indication of how the shifting discourse on this issue on a global level and the power of the BDS Movement, the Boycott Divestments Sanctions Movement that’s been lead by Palestinian civil society and social movements all around the world, is having real impact on government choices and now we’re seeing it play out at the United Nations.

DESVARIEUX: Let’s talk more about Israel’s reaction to all this. Israel’s UN ambassador Danny Danon said that the council’s decision reminded him quote “of a dark period in Europe when Jewish businesses were singled out and whoever supported the decision should be ashamed” end quote. So how do you respond to that Phyllis?

BENNIS: This is a classic thing that Israeli diplomats do over and over again, is to link any criticism of Israel to supporters of the Holocaust. What Danny Danon is saying is, this is like what led to the Holocaust in Germany where Jewish businesses were identified and then there were [ ] that were attacked on Jewish businesses. That’s exactly the opposite of what we’re dealing with here. We’re dealing with here with the occupying power which is Israel is violating international law; real violations of the Geneva conventions that prohibit this kind of activity in the occupy territory. Settlements are illegal and while not every business may be directly in violation in specific international laws, identifying which companies are engaging in profit making institutions thus profiting from occupation in the West Bank or East Jerusalem or the Golan Heights means that those organizations around the world who want to choose not to buy that product for instance is able to do so. Now there has been a very important Israeli Human Rights organization that has for years kept up with a website known as Who Profits; that has kept up lists of companies operating in the West Bank and Gaza.

But this imprimatur of the United Nations on that process which is a very important thing. We’ve already seen that some corporations have made the very appropriate judgment that the bad publicity they’re getting for their operations in the West Bank is too much to stay there and they’re choosing to move out. For example, the AHAVA Corporation which Code Pink lead a boycott movements against for the last several years which is a company that produces high end cosmetics made from mud and material taken from the Dead Sea. Which were both violating international law vis a vi international occupation and destroying the environment. They’ve announced that they’re going to move their occupation into Israel proper. The same is true for another corporation that has been the subject of boycotts for a while and I think that what we’re going to see is an increasing amount of pressure through the BDS globally that is simply going to reduce the profits of corporations, global corporations, that might think about operating in the occupied territories. They’re going to make the very real decision that it’s just not worth the bad publicity.

DESVARIEUX: Alright. Phyllis Bennis, always a pleasure having you on the program. Thank you so much for being with us.

BENNIS: Thank you it’s been a pleasure.