Phyllis Bennis: The failure of the powerful pro-Israel lobbying group to force congress to vote for intervention into Syria or for additional sanctions on Iran representing a significant decline in its influence

Phyllis Bennis: The failure of the powerful pro-Israel lobbying group to force congress to vote for intervention into Syria or for additional sanctions on Iran representing a significant decline in its influence 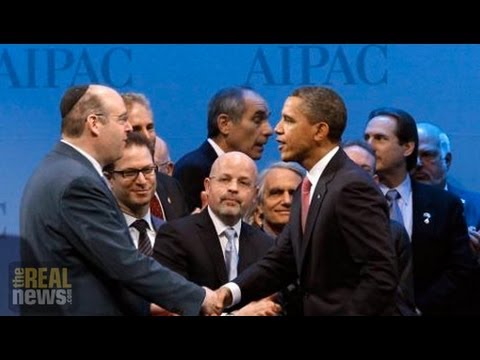 The American-Israel Public Affairs Committee, or, as we all know it, AIPAC, has wrapped up its annual policy conference. The D.C. conference is the lobby group’s most organized public effort to influence members of Congress to adopt pro-Israeli policies. So what exactly is AIPAC looking to achieve this year? Here’s a look at their legislative agenda, according to their website.

Number one, they want to urge Congress to promote a hardline stance against Iran, also increase U.S.-Israeli strategic cooperation and call Congress to provide $3.1 billion in aid to Israel for the fiscal year 2015.

Now joining us to discuss the significance of AIPAC is our guest, Phyllis Bennis. Phyllis is a fellow at the Institute for Policy Studies in Washington, D.C., and the author of the book Understanding the Palestinian-Israeli Conflict: A Primer.

Thank you for joining us, Phyllis.

PHYLLIS BENNIS, FELLOW, INSTITUTE FOR POLICY STUDIES: Good to be with you.

DESVARIEUX: So, Phyllis, although the boycott movement was not on the legislative agenda of AIPAC, it did come up in the conference. And I just want to play a clip of Secretary of State John Kerry and what he had to say about it.

DESVARIEUX: Phyllis, can you just give us some context? How is the recent boycott movement affecting the public relations efforts by groups like AIPAC?

BENNIS: It’s really quite extraordinary, Jessica. It’s extraordinary to watch the degree of defensiveness among AIPAC leaders. We saw it in the speech by Israeli Prime Minister Bibi Netanyahu, who, of course, was the keynote speaker at the AIPAC conference, and he spent probably a good third of his entire speech focused on the BDS movement, the boycott, divestment, and sanctions movement.

That movement, of course, is a movement that was originally called by Palestinian civil society back in 2005, who called on supporters around the world to boycott and divest from and sanction Israel until Israel stops violating international law and human rights. And at the beginning, of course, it was more a rhetorical point than a reality, but these days it’s becoming a huge campaign with enormous impact for Israel.

In Europe, the campaign is having very immediate and major financial, economic interests at stake in Israel. You see in Luxembourg, banking, and in Stockholm, the city council–major institutions throughout Europe are cutting off potential contracts with Israeli companies or with the companies that are doing business in Israel because of their support for occupation and apartheid. And that is getting very threatening for Israelis and for Israeli interests.

In the United States we’re seeing the BDS movement as a major part of what has been this incredible discourse shift in the last five, six, ten years over how the U.S. public sees Israel and how it sees Palestinian rights. So we’re no longer looking at it from the lens of Israel is our friend, Israel is our ally, Israel is the only democracy in the Middle East, the Palestinians are the problem, the Palestinians are, quote, terrorists, or something like that. We’re now seeing much more of it in the context of human rights violations. We’re looking at it as a rights-based issue, where one side has obligations under international law and they’re violating those obligations. That’s the basis of the BDS movement.

And that’s what’s been so extraordinary about it, that it’s having so much impact that you’ve heard President Obama and Secretary of State Kerry refer to it in the context of if Israel doesn’t make some serious changes, they’re going to face a worldwide effort at boycotts and isolation of Israel. Now we hear it from Secretary Kerry again at AIPAC, and we hear it from the Israeli prime minister himself, who spends a huge amount of his time challenging the BDS movement.

DESVARIEUX: Okay. And among the many American politicians who spoke at the conference, there was Democratic New York senator Chuck Schumer, and he maintained a hardline position on sanctions against Iran during the ongoing negotiation. Here’s a clip of Senator Schumer’s speech.

DESVARIEUX: That was senator of New York Chuck Schumer.

So, Phyllis, some commentators look at the U.S. recent engagement with Iran and the fact that the U.S. did not militarily intervene in Syria as sort of an indication of AIPAC’s declining influence on U.S. foreign policy. What’s your take?

BENNIS: I think that’s absolutely right. There’s a host of reasons, but if we’re looking for evidence, the failure of AIPAC to force a vote in favor of military strikes against Syria last summer, the failure of AIPAC, at least so far–we shouldn’t assume that this will always be the case, but at least so far, they have failed in their very intensive effort to gain congressional support for new sanctions, even while the U.S. is engaged in very important negotiations with Iran, with other international partners as well. So we’re seeing a serious decline of influence.

AIPAC never called the shots entirely on its own, but it was, and in fact remains, a very powerful actor inside the Beltway, particularly in influencing Congress. There’s a lot of money at stake. AIPAC is one of the most powerful lobbies in Washington, and there is a great deal of fear among members of Congress to cross it.

Most importantly, AIPAC no longer can make the claim–which was never really true, but they used to claim it–they can no longer claim that they are the only institution that can speak for Jews in Washington. Jews like me–well, not necessarily Jews who have all of my views, but Jews now have a wide-ranging set of opinions about Israel. You have an organization like Jewish Voice for Peace that has, I think, probably as many members around the country as AIPAC has. Maybe their mailing list isn’t quite as big. They certainly don’t have as much money. But they suddenly have enormous influence, particularly among young Jews and on college campuses. In Washington, an organization like J Street challenged the taboo where AIPAC used to be able to say no one else can speak for Jewish interests. Suddenly there’s J Street saying, we are pro-Israel and pro-peace. So you have a lot of challenges to AIPAC right now, and we’re seeing that play out, where they are simply not able to call the shots on their own the way they always thought they could.

DESVARIEUX: Okay. Let’s turn and talk about those people who are in support of AIPAC. There was a recent New York Times op-ed that was published. It’s titled “AIPAC Is Good for America”, and it was written by political editor of Jewish Journal Shmuel Rosner. He writes, quote:

“[I]f Aipac is guilty of anything, it is guilty of leadership mongering–of wanting America to continue playing an active role in shaping the Middle East, and the rest of the world.

“This is something that critics of Aipac’s specific policies should acknowledge and applaud.”

Phyllis, do you agree that this pro-American stance advocated by AIPAC plays a positive role in global politics?

BENNIS: No–not to put too fine a point on it, but no. I would certainly acknowledge that a big chunk of AIPAC’s raison d’être is precisely to encourage this understanding that the United States should remain, quote, the sole superpower who can tell the rest of the world, and specifically the Middle East, what to do, what not to do, who gets to have weapons, who doesn’t, who gets to have a state, who doesn’t, all of those things. That’s what AIPAC has always wanted. Is that a good thing? No, I don’t think so.

The U.S. is changing its relationship around the world, and some of that change is a response to the reality that the U.S. is no longer the unchallengeable superpower that it once was. There are many changes afoot. The nature of U.S. empire is very much changing and is somewhat on the decline. It doesn’t mean that the U.S. now faces a strategic threat from somebody. The U.S. still has the biggest economy in the world, has by far the most outrageously bigger, stronger, tougher, etc., military than the next 15 countries around the world. So those things haven’t changed. But the idea that the U.S. is still the post-Cold War winner who could call the shots, stand like the Colossus of Rhodes astride the world, that just ain’t happening anymore.

DESVARIEUX: Alright. Let’s talk about what wasn’t discussed at the conference, specifically the issue of settlement construction. Statistics from the Israel Central Bureau of Statistics showed that settlement construction more than doubled in 2013 from the previous year. Just really quickly, Phyllis, give us an update on the U.S. position on settlement freezes and how that’s affecting the peace negotiations between Israelis and Palestinians.

BENNIS: Right now the U.S. is not calling for another settlement freeze. It was the agreement to getting the Israelis to come to this round of peace talks, the round that I’m calling the Einstein talks because this is sort of like Einstein’s last definition of insanity, doing the same thing over and over again and thinking you’re going to get different results. That’s what Secretary Kerry is doing this time around. He’s not going to get different results.

But what they had to promise the Israelis to get them in the room was, among other things, that they would not impose another settlement freeze. So we don’t have calls for a settlement freeze, despite the massive escalation in the pace of land seizures, expulsions of Palestinians, demolition of Palestinian homes. If we want to talk about what is undermining the legitimacy of Israel, what Bibi likes to talk about, the threat of delegitimation, that’s what’s delegitimizing Israel all around the world, and it’s going on with the U.S. saying not a word.

AIPAC doesn’t really have to worry about lobbying for the $3.1 billion in military aid. Israel is already going to get that. That’s already in the budget. It’s already been approved. They don’t have to lobby for that. That’s part of the problem is that the U.S. continues to fund solely the Israeli military. This is not economic aid (appropriately enough–Israel is the 27th-wealthiest country in the world; it certainly doesn’t need economic aid). It doesn’t need military aid, either, but that’s what we’re giving it, $3.1 billion in military aid, unquestioned. And it’s the only country that’s allowed to spend a big chunk of that, a quarter of that, on their own research and development at home, competing with the Pentagon. Every other country has to spend all of their military aid here in the United States.

DESVARIEUX: Alright. Phyllis Bennis, always a pleasure having you on. Thank you for joining us.

BENNIS: Thank you. It’s been a pleasure.