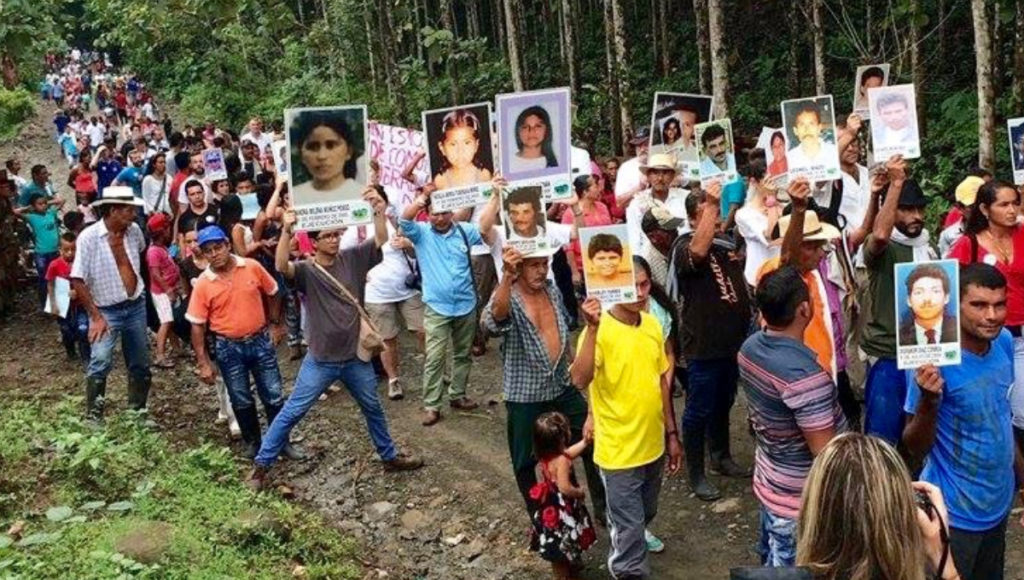 GREGORY WILPERT: Welcome to The Real News Network. I’m Gregory Wilpert coming to you from Quito, Ecuador. Colombia’s peace agreement which the government signed last year with the rebel group known as the FARC or Armed Revolutionary Forces of Colombia, is in trouble. Paramilitary groups such as the Gaitanistas Self-Defense Forces of Colombia or AGC are on the rise.

Paramilitary forces were supposed to be demobilized years ago but recently they have been terrorizing a peace community in the department of Antioquia. Also, since Christmas, 14 activists have been killed, presumably also by paramilitary forces in the town of Tumaco in the department of Nariño. The Colombian government has now sent 2000 troops to the area to control the situation. On top of this, on Wednesday, the Colombian announced it is suspending peace talks with Colombia’s other rebel group, the ELN, as the two sides could not agree on an extension of a ceasefire agreement that had been in place since last October 1st.

Joining me now from Bogotá, Colombia to talk about the trouble that Colombia’s peace agreement is in right now is Tom Power. Tom has worked with the Fellowship of Reconciliation Peace Presence since January 2016. FOR Peace Presence is an international accompaniment organization that works throughout Colombia. Tom was just recently in the peace community of San José de Apartadó . He joins us now from Bogotá, Colombia. Thanks for being here, Tom.

TOM POWER: Thanks for having me.

GREGORY WILPERT: So, as I mentioned, you were recently in San José de Apartadó. First, tell us about, what is special about this town which calls itself a peace community?

So, the idea of them in 1997 as a form of self-protection was to band together and pledge neutrality to all armed actors and it’s been a process that they have their principles, which include don’t carry weapons, don’t hand over information to any armed actor, legal or illegal, work together collectively. And they’ve maintained that process over the course of 20 years. And in March of last year, they celebrated their 20th anniversary.

GREGORY WILPERT: So, you were there recently when members of the AGC paramilitary group entered into this town. Tell us about why you were there, what you were doing there and what happened?

TOM POWER: So, my organization, Fellowship of Reconciliation, we do what’s called international accompaniment, as you touched in the intro. And kind of our accompaniment is based in, also in certain principles. The most important being no interference and political neutrality. We don’t engage in the internal process of the community and things of that nature. Our work consists of three big kind of points. The first one being the idea that international accompaniers and international observers have a dissuasive presence in the face of armed actors who could commit violence against the people we accompany.

A second thing we do is political advocacy. So, we have like a team that maintains a permanent presence in the rural district of San Jose, accompanying exclusively the peace community, and that team is on the ground doing that physical presence, but we also have a team in Bogotá that maintains meetings and contacts with the diplomatic corps and with state entities to make visible some of the issues from some of the observations we make in terrain. And we also inform like our international base on current events or concerns we might have, or just general news of the people we accompany, which includes the peace community and other processes as well throughout Colombia.

GREGORY WILPERT: Yeah, go ahead. No, that’s what I was going to ask you. What happened on the 29th?

TOM POWER: Right, exactly. So, basically, because we maintain that permanent presence, I was just normally there as I would be in our house at that point in the largest settlement of the peace community, which is called San Josecito. Keeping in mind that the peace community is a collective of people that have various settlements throughout a much larger rural district that is San José de Apartadó. And so, I was in my house there on the day of the attack just like it was a normal day. I was talking with other, there’s other international organizations that make presence in that settlement that is San Josecito, when we heard that something was happening on the other side of the settlement and we ran to the other side and there was an attack in progress.

Five armed men had entered the community and were attacking leaders of the peace community, including the legal representative, Germán Graciano and other leaders as well. There was five armed men with, some had pistols, some had machetes and they were trying to force the leaders into like a room and were trying to make this assassination attempt appear as a robbery has been the narrative from the peace community, which gave us time to show up and to react to the armed men. The other members of the peace community who were present at the time or were in other parts, immediately reacted, confronting, they were all unarmed. They have committed to not bear arms of any sort. Nevertheless, they reacted and immobilized two and disarmed two of the attackers while the other three fled.

GREGORY WILPERT: So, were you able to identify who the attackers were and why they were attacking?

TOM POWER: Sp, this attack wasn’t totally a surprise for the peace community. I mean, I think they could identify the attackers pretty well. They had put in one of their communiqués, like periodically they release communiqués to be read by state organisms or their public, or their just, their international following throughout the world. And they had knowledge of a plan to assassinate the legal representative, Germán Graciano, to make it appear as a robbery in a communiqué that they put out on the 21st of December.

GREGORY WILPERT: And so, how do such incursions affect the peace agreement between the Colombian government and the FARC? I mean, is there a connection, and if so, what?

TOM POWER: Well, I think this is very emblematic of a phenomenon that you’re seeing throughout Colombia of like the targeted assassinations of social leaders. And a recent report released by the think tank in Bogotá, INDEPAZ, they have noted a 45 percentage increase in the assassination of social leaders throughout Colombia from 2016 to 2017. So, in just like, since the signing of the peace accords. And it’s pretty concerning given that these groups, which in the peace accords, there’s a whole chapter dedicated that acknowledges that the successor groups to paramilitaries, the paramilitaries they tried demobilizing in 2005. And in the peace accord, there’s the third point, which has to do with the end of the conflict. And 3.4 has to do with the dismantlement of these groups that are recognized as one of the primary risks for these social leaders or leaders of social movements. So-

GREGORY WILPERT: So, how-

TOM POWER: … acknowledgement that these…Sorry. So, taking this into account, we would say that these groups represent probably the number one risk to lasting peace in Colombia.

GREGORY WILPERT: So, how is the government reacting to this increase in what’s presumably paramilitary activity? And what is the community itself demanding of the government with regard to this?

TOM POWER: Well, from the government. There’s about 20 measures laid out in that 3.4 of the peace accords and so they’re in the process of implementing that. I think at a public level, I think we’re definitely seeing mixed messages. I know that recently the president has put out an executive order about the protection of social movements. At the same time, we’re concerned about the discourse, for example, the Defense Ministry, who has recently gone on the record saying that the assassination of these leaders has to do with problems between neighbors, with problems between women, with drug trafficking, which, well, I think that, that was like a concerning statement seeing that this also could be perceived as a like a targeted systematic assassination of social leaders.

And also given the reaction of the governor of Antioquia after the attack on the peace community in San José de Apartadó, alleged that there are no paramilitaries inSan José de Apartadó given the information that he has. So, we’re seeing mixed messages on that level. We know that we’ve observed seemingly from this group, if you call it paramilitaries, if you call it anything else, at least in the rural district of San Jose, we are seeing this phenomenon there, as well as other parts of the country, of like the FARC leaving and these other groups filling up the power vacuum that exists. We’ve seen that this group perhaps could have intentions of territorial control.

So, the fact that these groups are growing in power, the question would be what are the strategies from the authorities of the zone that are in charge of providing security, such as the police, the military and what strategies they have. I mean, look, there’s like 20 measures just in the peace accords themselves, but I think we’re at this point we’re seeing a 45% increase in killings of human rights defenders. If it’s not the time to be asking ourselves if there’s other strategies or if there’s other people, other voices that have other ideas to dismantle these groups that, once again, represent probably the number one threat to lasting peace in the country.

GREGORY WILPERT: Just one last question. Do you see anything that the Trump administration could or should, or should not be doing with regard to the increased killings of social leaders?

GREGORY WILPERT: Okay. Well, we’re going to continue to follow this situation, of course. I’m speaking to Tom Power of the Fellowship of Reconciliation Peace Presence. Thanks again Tom for having joined us today.

TOM POWER: Thank you, very much.