Robert Lovelace speaks to TRNN via satellite phone from the Freedom Flotilla III, four boats that are attempting to break the Israeli blockade of Gaza to deliver humanitarian aid

Robert Lovelace speaks to TRNN via satellite phone from the Freedom Flotilla III, four boats that are attempting to break the Israeli blockade of Gaza to deliver humanitarian aid 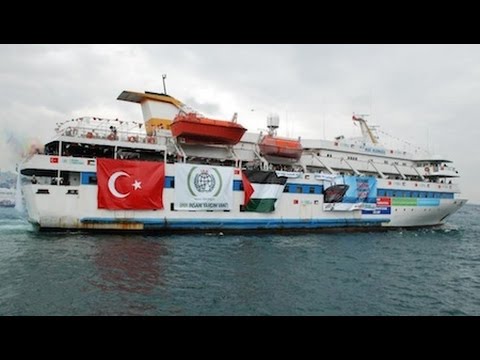 SHARMINI PERIES, EXEC. PRODUCER, TRNN: This is The Real News Network. I’m Sharmini Peries coming to you from Baltimore.

The Freedom Flotilla III, a convoy of aid ships, has set sail to break the Israeli naval blockade of the Gaza Strip. Organizers aim to deliver medical supplies to local hospitals and hope to arrive Sunday or Monday. The Flotilla is carrying 70 passengers, including former Tunisian president Moncef Marzouki and Basel Ghattas, an Arab Israel Knesset member. In 2010 a similar effort of the Mavi Marmara ended in bloodshed when Israeli commandos raided the ship and killed ten Turkish activists.

Gaza is home to 1.7 million people, including 1.2 million Palestinian refugees. The Gaza Strip has been under a restrictive military blockade since 2007.

Joining us now from Flotilla III heading to Gaza is Robert Lovelace. Robert is the former chief of the Ardoch Algonquin First Nations in Canada. Robert, thank you so much for joining The Real News Network.

PERIES: Robert, give us a sense of who’s on board and why you’re risking your lives to deliver this aid to Gaza.

LOVELACE: We are bringing a ship, a Swedish ship, which is a [inaud.] [trawler] to the Fisherman’s Union at Gaza, as well as we have some solar panels that will help the hospitals stay little when power is out.

We’re bringing these to Gaza because Gazans need to start developing their economic capacity. They have been blockaded since 2008, and because of that the people there have been cut off from the rest of the world. The port has been closed, and it makes it extremely difficult when Israel administers all of the traffic in and out of both the West Bank and Gaza.

PERIES: And give us a sense of who’s on board, how many boats are with you on the caravan?

LOVELACE: Right. There are 12 boats on the Flotilla this summer, and part of the reason for the Flotilla is to bring world attention to the fact that this [enclave] of 1.8 million people do not have free access to the world. And by challenging the blockade, we’re bringing awareness to the world so that people can pay attention. They can go online and do research, and pay attention to what’s happening in this part of the world.

LOVELACE: We have Dr. Marzouki, who is the ex-president, or the past president of Tunis. And he’s really concerned today because of some events in his country. We also have a member of the Knesset, the Israeli parliament, who is here to help us deal with any resistance that we get when we get close to Gaza.

PERIES: Speaking of resistance, are you prepared to be boarded by the Israeli military? Ten people were killed in the last time such an attempt was made to deliver aid to Gaza. Are you prepared for that?

LOVELACE: We are prepared. We will–we will passive resist any boarding. Boarding a ship flying under a friendly nation’s flag such as Sweden is illegal in international waters. And we won’t be, we won’t be approaching Israeli national boundaries or waters. We’ll be approaching the Palestinian boundaries in Gaza.

And so in effect, you know, I know that Israel has its policies of stopping ships who want to enter Gaza harbor because they’re concerned with security, but we pose no security threat at all. Simply bringing a fishing vessel to the Fisherman’s Union doesn’t pose any threat at all to Israel.

So we will passively resist. We don’t want a confrontation, and that’s one of the reasons why the member of the Knesset has come with us, is to certainly assure his countrymen that [incompr.]

PERIES: Robert Lovelace, I want to thank you so much for joining us today, and I wish you all the best and safety on board Flotilla III.

LOVELACE: Okay, thank you very much, and thank you for making the listeners aware of the situation here.

PERIES: Also joining us now from Urbana, Illinois is Robert Naiman. Robert Naiman is policy director of Just Foreign Policy. Bob, thank you so much for joining us today.

ROBERT NAIMAN: Good to be with you.

PERIES: So Bob, give us a sense of Israeli policy towards this kind of aid coming to Gaza.

NAIMAN: What we’ve seen in recent days is Israeli government statements claiming that this flotilla is headed for Israeli territorial waters. This of course is not true. This flotilla like other flotillas in the past is headed from international waters to Gaza.

PERIES: Last time this happened, the Mavi Marmara, there was bloodshed and ten people, Turkish activists, were killed. You think the Israelis will continue to do something like that this time around?

NAIMAN: No. I don’t. Of course, it can’t be ruled out, this is in the hands of the Israeli government. But we’re in a moment in history when the Israeli government is already under unprecedented international pressure over its policies, particularly towards Gaza. Foreign direct investment in Israel last year was down by 50 percent. Analysts were attributing this to the Gaza war.

So I think that the Israeli government can ill afford to have the negative publicity and political pressure that would come from such a violent assault, again, on a flotilla.

PERIES: Bob, last time this happened with the Mavi Marmara, what was the U.S. policy and stand on the incident?

NAIMAN: The negative part is that the U.S. never cooperated, in fact worked to thwart, international efforts to hold the Israeli government responsible for its attack on the Mavi Marmara. The one positive thing is that after that assault, incident, brought attention to the blockade, the U.S. did cooperate in efforts to pressure the Israeli government to at least ease the blockade.

PERIES: Bob, thank you so much for joining us today.

Robert Lovelace is the Former chief of Ardoch Algonquin First Nation in Canada. He is one of the activists onboard the Gaza-bound Marianne av Göteborg with the international Freedom Flotilla Coalition.