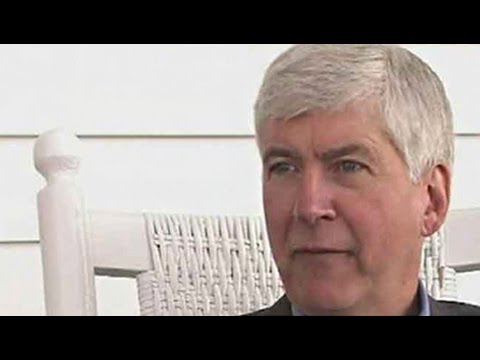 A recall measure on Michigan Governor Rick Snyder is underway and it has cleared the first hurdle when a state election panel approved the proposed wording on the petition seeking voter support. The committee to recall Richard D. Synder, the organization behind the move would have to collect more than 790,000 signatures or 25% of the registered voters to initiate the recall.

Here to talk about all of this is Reverend David Bullock and Frank Hammer. Reverend Bullock is a Pastor of Greater St. Matthew Baptist Church. He’s also founder and national spokesperson for Change Agent Consortium. He’s one of the petitioners for the recall and we’re also joined by Frank Hammer. He’s a retired General Motors employee, former President and Chairperson of Local 909 in Warren, Michigan, he’s a Detroit Labor Community and Environmental activist, he’s also on the board of the Real News Network.

Gentlemen thank you so much for joining me today.

PERIES: So Reverend Bullock, let me start with you. You’re working on this petition so give us a sense of why you have initiated it.

BULLOCK: Well number 1 the recall petition is about Rick Snyder but it’s also about emergency management. Folks in Flint and across the state had been moving towards demanding justice and accountability for the destruction of public education, the suppression of the right to vote, the Flint Water Crisis, and other ills caused by the emergency management system, and we have not gotten any relief. And so activists began to submit language to the board of Canvassers. I was one of those activists who submitted language. The language I submitted was approved and so as a petitioner who actually got language approved, so part of the responsibility then fell on me to help move the ball to the next phase.

PERIES: And Reverend has this ever been done in Michigan?

BULLOCK: This has never been done in Michigan. A sitting Governor has never been recalled in Michigan. Also let me add that in 2012, they made it a lot harder, the Snyder administration did. You used to have 90 days to collect signatures, now you have 60 days. A 60-day window to collect those signatures. Also they changed the circulation process. You used to circulate by county. Now you have to circulate by city, township, and village. So it’s a herculean task but we are undaunted and we are not depressed we’re moving forward and I’m excited about all the activity around the recall effort.

PERIES: And the debate that’s going on obviously. So Frank let me ask you why are you supporting this recall on Governor Snyder?

HAMMER: So I think it’s a question of accountability and I think that people throughout the state feel that the government is sort of out of control. I understand that when President Obama went to Flint yesterday that the audience booed Snyder continuously and for a very, very long time and I think that the trust in government has now been severely damaged. I think that the only way it’s going to be repaired is first of all Snyder should step down but if he doesn’t step down citizens should exercise their authority under the constitution and recall him. I mean that’s what citizen control over government is all about. So I think that’s a very big part of the reason. I think that it’s also on assault. His administration has been on an all-around assault on minority residents in the state of Michigan, specifically cities populated with majority black populations.

PERIES: And Reverend Bullock, give us a sense of why this has taken so long. This disapproval of the Governor. You have had him in power for a long time and he was actually just recently reelected in November 2014 and it has taken the citizens a while to catch up with what he has been doing or undoing in terms of all kinds of social security and safety nets that community should be entitled to in a state. Give us a sense of why it has taken this long to realize this.

BULLOCK: Well I think in fact; it’s taken the nation a long time to catch up to citizens in the state of Michigan. Public Act 4 which the emergency manage of law was repealed by citizens in the state of Michigan. This actually is the third attempt to recall Governor Rick Snyder. One of the reason why the law was changed in 2012 is because there were 2 recall attempts during his first term. So you know eroding the [error] income tax credit, emergency management, destroying the safety net, depressing people’s pensions, and destroying democracy. These are the things that folks have been fighting for now since Governor Rick Snyder has been elected. It’s just now because of the Flint Water Crisis that the Snyder administration’s activity have got national attention. So we believe that the wind is in our sails and we have the momentum to actually execute a referendum on the Snyder administration’s leadership and so we’re moving ahead very, very swiftly and efficiently to do that.

PERIES: Alright Frank, so in terms of the rest of the community and civil society, gathering momentum behind this recall move what are the other organizations and movements that are supporting this. Give us a sense of that?

HAMMER: So actually I want to comment on a force that hasn’t been on the table yet in regards to the recall and I think that it’s very important that we point out that when the two Presidential candidates for the Democratic party debated in Flint on March 6th and I’m talking about Hillary Clinton and Bernie Sanders. It was very interesting, both of them said the Governor should resign but Hillary went in one step further and said that if he doesn’t resign he should be recalled and she went one step further and said that we should support those petitioners that are wanting to recall the governor. I think that given the big obstacles that the Republican administration has done with the recall, making it 90 days down to 60. That it would behoove the Democratic party to come out in support of Hillary Clinton and spearhead the campaign all over the state with the organizational network that the Democrats have and also the resources. I think with that kind of support; this ambitious undertaking can come to fruition.

PERIES: Where are the labor unions at with this measure?

HAMMER: So there are a few unions that have come forward. Notably the AFSCME Local 25 here and the city that represented public workers and I think there are a couple of others as well. But I think it’s been a little too quiet on the labor front and by the way it should be pointed out that the changes in the recall laws came one week after the legislature in Lansing voted to make Michigan a right to worker state. So I think the labor has to understand that this was a diminishment of democracy on two fronts and should respond in kind.

PERIES: And please explain the right to worker legislation.

HAMMER: Yes, thank you. So the state voted to replicate what’s been a long standing feature in southern states and that is that member workers in workplaces could enjoy all the benefits of union representation but would not be required to support financially, those unions that were bringing them those benefits. That’s what the right wing calls right to work. But the labor movement typically calls it right to work for less.

PERIES: And Reverend Bullock you wanted to get in on this.

BULLOCK: Oh no I just wanted to say that definitely AFSCME Council 25 has been supportive. I did have the opportunity to talk to the President of the United Auto Workers today and looks like the UAW at least is going to lend support so that their members that want to get involved can get involved. I think with the development of public education, Detroit public schools in Detroit, early this morning at about 5:50am basically the AFT and this local affiliate the DFT basically their contract was rendered null and void. There are now 2 Detroit public school systems so I think, you know, over the weekend it’s going to be very interesting to see how the teacher’s unions respond to the Governor’s attack on them and if they’ll get involved in the recall effort in a more robust way.

PERIES: Alright. Reverend Bullock, Frank Hammer, I thank you so much for joining us today and we’ll be keeping an eye on the measure as it’s moved forward and I wish you all the best with it.

BULLOCK: Thank you so much.

HAMMER: We thank you. Thank you Sharmini.