In her long-awaited first prime-time interview - to ABC News' Charles Gibson - since appointed as running mate to Senator John McCain in the Republican presidential ticket, Alaska governor Sarah Palin was able to display her foreign policy knowledge - which does not include understanding the meaning of the Bush doctrine of preemptive war. Adding to the chorus of Americans who suspect Palin is not prepared to be a heartbeat away from the Presidency in case McCain wins the election, the neoconservatives who gave her a crash course in international relations before she sat for the interview did not fail to commit a series of blunders.

In her long-awaited first prime-time interview - to ABC News' Charles Gibson - since appointed as running mate to Senator John McCain in the Republican presidential ticket, Alaska governor Sarah Palin was able to display her foreign policy knowledge - which does not include understanding the meaning of the Bush doctrine of preemptive war. Adding to the chorus of Americans who suspect Palin is not prepared to be a heartbeat away from the Presidency in case McCain wins the election, the neoconservatives who gave her a crash course in international relations before she sat for the interview did not fail to commit a series of blunders.

The "lipstick pit-bull" goes to war 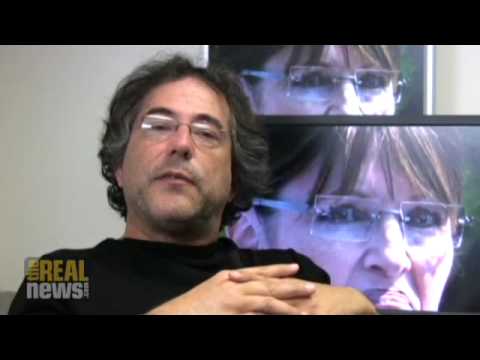 INTERVIEWER: Do you agree with the Bush doctrine?

INTERVIEWER: What do you interpret it to be?

PALIN: I believe that what President Bush has attempted to do is rid this world of Islamic extremism, terrorists who are hellbent on destroying our nation. There have been blunders along the way, though. There have been mistakes made. And with new leadership—and that’s the beauty of American elections, of course, and democracy is with new leadership comes opportunity to do things better.

PEPE ESCOBAR, SENIOR ANALYST, TRNN: In what respect, Charlie? So the lipstick pit bull hockey mom who may be a heartbeat away from the presidency of the United States has no idea what the Bush doctrine of preemptive war is all about, even though it was applied in Iraq with devastating consequences and is now being applied to Pakistan. Worse, Sarah Palin tries to make it look like she knew what she was talking about. Sarah Palin never met a foreign head of state. She got her first passport in 2006, hasn’t been around that much.

PALIN: Canada, Mexico, and then, yeah, that trip that was a trip of a lifetime, to visit our troops in Kuwait and stop and visit our injured soldiers in Germany.

ESCOBAR: But she wouldn’t blink to go to war with a formidable nuclear power, Russia. And how did she come up with this no less formidable foreign policy insight?

PALIN: They’re our next-door neighbors, and you can actually see Russia from land here in Alaska. And we’ve got to keep an eye on Russia. For Russia to have exerted such pressure in terms of invading a smaller, democratic country unprovoked is unacceptable.

ESCOBAR: Obviously, no neocon frantically briefing Palin these last few days told her that the Russians responded to Georgia attacking and virtually destroying the capital of South Ossetia.

INTERVIEWER: —with the NATO treaty, wouldn’t we then have to go to war if Russia went into Georgia?

PALIN: Perhaps so. I mean, that is the agreement when you are a NATO ally is if another country is attacked, you’re going to be expected to be called upon and help.

The neocons themselves, they seem to have no clue about how NATO works. If Georgia, or the Ukraine, for that matter, they want to become part of NATO, they have to go through the Membership Action Plan (MAP). That’s a mechanism that helps countries that want to become NATO members. You can be stuck in the MAP for as long as ten years. What Palin is saying is that Georgia, and the Ukraine, for that matter, they should become NATO members, like, tomorrow. Even Bush and McCain know this is absolutely impossible. Palin also has no clue that all 27 NATO countries must be unanimous when they admit a new member. Anyway, she doesn’t blink. War? With Russia?

ESCOBAR: But wait—there are more wars in the pipeline.

INTERVIEWER: Do you consider a nuclear Iran to be an existential threat to Israel?

PALIN: I believe that under the leadership of Ahmadinejad, nuclear weapons in the hands of his government are extremely dangerous to everyone on this globe, yes. We have got to make sure that these weapons of mass destruction, that nuclear weapons, are not given to those hands of Ahmadinejad—not that he would use them, but that he would allow terrorists to be able to use them. So we have got to put the pressure on Iran.

Once again, some neocons should have told Palin that Ahmadinejad has nothing to do with the Iranian nuclear policy. The supreme leader, Ayatollah Ali Khamenei, is responsible for Iran’s nuclear policy. And Palin should also read the national intelligence estimate which says that Iran would not be able to get a nuclear weapon before 2013, even if they were after a nuclear weapon. And her idea that the leadership in Tehran would hand over a traceable nuclear bomb to a terrorist outfit, that’s beyond ridiculous. But what about Israel? Are they allowed to attack Iran?

ESCOBAR: Now, guess what? Palin has no idea that what Israel might do in the Middle East deeply affects US security. Once again, some neocons should have told Palin that the chairman of the Joint Chiefs of Staff was sent to Israel to tell them they will not attack Iran, at least for now. And then there’s 9/11.

INTERVIEWER: Why do you think those hijackers attacked? Why did they want to hurt us?

PALIN: The only option for them is to become a suicide bomber, to get caught up in this evil, in this terror. They need to be provided the hope that all Americans have instilled in us because we’re a democratic, we are a free, and we are a freethinking society.

ESCOBAR: It would have been wishful thinking to expect some neocon to brief Palin on the very nuanced complexities of what goes on in the Muslim world. Better stick with evil terror. As for the new chapter in the war on terror, President Bush has authorized forces to attack inside Pakistan, even without the approval of the Pakistani government. Not surprisingly, Palin is totally gung ho about it.

PALIN: In order to stop Islamic extremists, those terrorists who would seek to destroy America and our allies, we must do whatever it takes, and we must not blink, Charlie, in making those tough decisions of where we go and even who we target.

ESCOBAR: Does that ring a bell?

PALIN: We have got to have all options out there on the table.

ESCOBAR: So McCain and Palin want the US in Iraq for 100 years. They wouldn’t blink in bombing Iran. They’re in favor of invading Pakistan. And why not? Go to war with Russia over Georgia. Of course, all this because Iraq was guilty of 9/11.

PALIN: You’ll be there to defend the innocent from the enemies who planned and carried out and rejoiced in the death of thousands of Americans. You’ll be there because America can never go back to that false sense of security that came before September 11, 2001.

ESCOBAR: So what to make of all this? Sarah Palin is a radical, creationist, anti-intellectual, right-wing, fundamentalist Christian whose world view finds striking parallels with a theocratic Wahhabi sheik in Saudi Arabia, for that matter. As cozy with big oil as she is in Alaska and in favor of drilling in the National Wildlife Refuge—"drill, baby, drill," the Republicans would say—it is wishful thinking to expect her to promote an energy policy that would eliminate US dependence on fossil fuels. She may appeal to socially ultraconservative Christian fundamentalists and to an ultra-reactionary, white, and, I would say, racist section of the American working class. But the whole Palin circus has nothing to do with lipstick, pit bulls, or pigs; it has to do with the fact that she’s proving herself to be unfit to be a heartbeat away from the presidency of the United States under any circumstances. She doesn’t know what the Bush doctrine of preemptive war means; she doesn’t believe in international sovereignty; she doesn’t know how Iran is governed; she knows nothing about Pakistan; she knows nothing about al-Qaeda; she never met a single foreign head of state. You can’t possibly aspire to become vice president of the United States by having a crash course in the world at large with neocon and Georgia lobbyist Randy Scheunemann and his minions. And it gets worse. Sarah Palin parades her ignorance and total lack of experience as a virtue. The ancient Greeks call it hubris; Americans may well end up calling it "nightmare."