Up to Six Mass Graves Discovered in Jaffa, with Hundreds of Victims from 1948

Sami Abuskhade: the Israeli discourse denies the very existence of the Naqba, but after decades of denial Palestinians are finally able to bring their history to light

Sami Abuskhade: the Israeli discourse denies the very existence of the Naqba, but after decades of denial Palestinians are finally able to bring their history to light 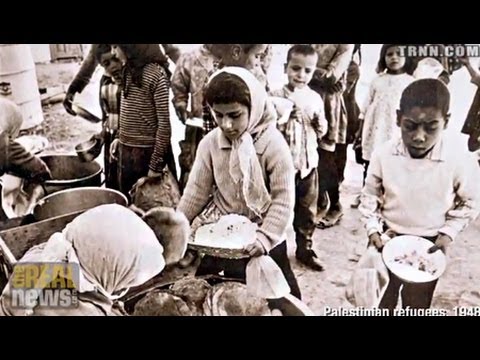 SHIR HEVER, TRNN PRODUCER: Welcome to The Real News Network. This is Shir Hever in Germany.

The city of Jaffa, or Yafo, as it is called by the Israeli authorities, looks like a normal city on the Mediterranean Sea, bustling with tourists and with businesses. Beneath this veneer are layers of history that the government is trying to erase.

After the city was conquered in 1948 by the Haganah, which was the Jewish militia which later transformed into the Israeli army, the names of streets have been changed, the city was merged with the city of Tel Aviv so that there is actually no longer an independent city of Jaffa, and ruins of the 1948 War were removed. Jewish citizens started to move into the city as well.

But in early June, this June, a mass grave has been discovered in the city of Jaffa with hundreds of bodies, skeletons from the 1948 War, and this grave is a sort of fact that cannot be ignored. It brings back to this history of city of Jaffa and of all of Palestine.

And here to talk about this is Sami Abushkhade. Sami Abushkhade is a PhD student in Tel Aviv University studying the history of modern Jaffa. He’s a city councilmember in the city of Tel Aviv-Yafo from the Jaffa Party. The Jaffa Party is a combination of two parties, Balad and Jabha.

HEVER: So, Sami, can you tell us about the discovery of this mass grave? How did that happen?

ABUSHKHADE: Happened by mistake, Shir. The Islamic movement in Jaffa was doing some work in an old cemetery, an old Islamic cemetery in Jaffa named the Kazakhani. They were doing some cleaning, some renovations of graves. And in chance, while working there they discovered six mass graves in this cemetery.

HEVER: Are they successful in bringing this into awareness? Is the Israeli media covering this story?

ABUSHKHADE: Well, to be honest, Shir, this is–we don’t have to–these mass graves are surely from the 1948 War. We have some people that claims that these are mass graves of the 1948 War because they participated in bringing these people into the cemetery, they did it themselves. But still now there is not clear-cut proof that could be talking about. But the Israeli media, compared to other media, is really ignoring the whole issue.

HEVER: But what do you mean, there is no proof, if you just said that there are people who were there and who can testify that they brought the bodies to the graves?

ABUSHKHADE: Well, Shir, there are a lot of things, and it all together, that should be–I mean, put the whole issue in context. First of all, it’s not that Israel only denies mass graves in Jaffa. In the Israeli political discourse there hasn’t been an effort at all. And there is no Palestinian people, officially, in the Israeli official discourse. There has been no Palestinian people. And the War of 1948, from the Israeli point of view, was a great war, very humane one, and there have been no massacres, because the Israeli army is the most humane army in the whole world.

HEVER: Yeah. For our viewers who do not know, the word nakba in Arabic means catastrophe. It refers to the mass deportation and killings of 1948, but also to the ongoing decision by the Israeli government over the years not to allow refugees to return to their homes and to make further deportations. How can there be a discourse when this–that this doesn’t exist when the facts are on the ground?

Yesterday we held a lecture with Dr. Adel Manna, a Palestinian historian who has just finished a research on the Palestinians who survived the war, the 1948 War, the Palestinians who are now citizens of the state of Israel. It’s the period [incompr.] talking about 1948 and 1956. And he has proofs, he has letters from the Zionist archives that talks about act of revenge and massacres that were happening also after the war, not during the war. And he talks about the fact that there were a lot of bodies spread all over Jaffa of young people, children, women, and men, that people did not have the time to bury them, and then they were brought to mass graves, into the city of Jaffa in different cemeteries.

HEVER: So was this mass grave discovery also a surprise for people in Jaffa?

But also those who experience the war, those who survived the war, those who knows what happens are in a different psychological [incompr.] that they don’t want to share this tale, for different reasons, part of it because of the feeling of humiliation, because they lost the war and that brought them a lot of humiliation, part of it because of fear. The Palestinians who passed the Nakba and became citizens of Israel were put under military control for a long time, and they are still controlled with fear. This war meant the total destruction of their families and their people.

And the locals who stayed and survived the war, the very small minority, were put into what the Zionists called a ghetto. All the Arab community were concentrated in one neighborhood, the Ajami neighborhood, and it was called a ghetto because it was surrounded with fence, with soldiers and dogs outside the fence. The Jewish community, from its European historical experience, when they saw something like this, they used to call it a ghetto. And the Zionist movement concentrated the Arabs in Jaffa and Negev.

HEVER: Getting back into the story of what happened in Jaffa in 1948, the mass grave that was discovered, is it a mass grave of soldiers, of fighters, or civilians?

ABUSHKHADE: You know, Shir, to put it in numbers, researchers took about something like 700 and 800 people that were killed during the War of 1948 in Jaffa.

HEVER: Just in the city of Jaffa.

ABUSHKHADE: Part of these people–I’m talking about Arabs, of course–part of these people were different volunteers from different parts of the Arab world who came to help the Jaffans defend their city. This is something like 250 people. The rest are the locals, people from Jaffa, Arabs from Jaffa.

Two-thirds of this community that were killed were innocent people. They were not soldiers and they never held a gun or something. These people were either killed in their homes by the different bombings–and Jaffa at that time was surrounded by different Jewish cities and colonies–and that they were, you know, bombing Jaffa from all over. So part of the people who were killed in their homes or in the streets.

HEVER: I want to ask you one last question, because there is a new law that was enacted by the Israeli parliament about two years ago called the Nakba, and this law says that any organization that receives public funding and commemorates the Nakba, teaches about the Nakba, could lose their public funding. Do you think that this law affects the way that discoveries such as the mass grave are reported? Does that make it more difficult for Palestinians or others who want to study this history talk about it?

ABUSHKHADE: Well, Shir, this law is going to fail because it’s an inhumane law. It’s not going to work. It’s going to fail. Of course it might affect some official institutions meant to commemorate the Nakba, but this will not stop all the political activists from continuing to commemorate the Nakba every–and teach our children what happened. And Israel can lie to part of the world part of the time. They cannot and they will not be able to continue lying to all the people all the time.

Till now, the official Israeli discourse has continued to deny this. I’m seeing a big change in different parts of the world and inside the Israeli-Arab-Palestinian society, a little bit inside the Israeli-Jewish society who are knowing more about what happened to the Palestinian people as a result of the Zionist project. And this thing in the end will bring to the awareness of people, to the knowledge of all the people, that the establishment of the Israeli state meant a total destruction of the Palestinian people.

HEVER: Well, thank you very much, Sami, for joining us.

HEVER: And thank you for joining us on The Real News Network.