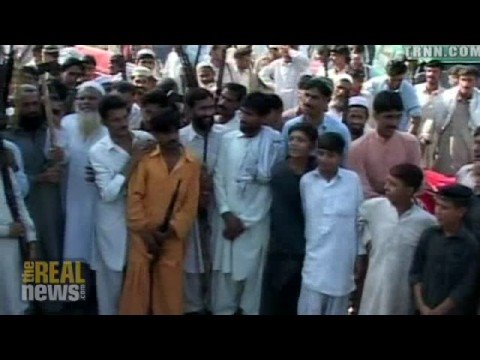 ZAA NKWETA, TRNN: In recent days, violence has increased in northwest Pakistan. Responding to the upsurge, the Pakistani government approved the mobilization of local militias known as Lashkars against the Taliban. But who are these Lashkars? And what do they stand for? The Real News spoke to Dr. Tariq Amin-Khan, professor of politics from Ryerson University in Toronto and an expert on Pakistani politics. So, Tariq, thank you for joining us here at The Real News.

NKWETA: Pakistani tribesmen, or Lashkars, as they’re called, are being used to fight the Taliban and al-Qaeda on the Pakistani-Afghan border. Who are these Lashkars? What are they? Who are they composed of?

AMIN-KHAN: They are the residents of those areas, and they’re led by the tribal heads, or the maliks, as they’re known. And traditionally the maliks have been relied on by occupying powers such as Britain used them. Even Pakistan when it became independent used them. But during Musharraf’s era, the maliks were done away with, and reliance was more on government institutions being established in those areas. And now, given that Taliban have become so strong in those areas, it looks like that the government is reverting back to them. But only now they’re arming them, and they’re arming them with fairly heavy and sophisticated weaponry.

NKWETA: So what are the ramifications of that? You’ve got these Lashkars, these tribesmen who are indigenous to the area, they’re part of the area. From what I understand, reports are saying that they are fed up with the ongoing conflict on both sides, both from the Taliban and the government.

AMIN-KHAN: You know, wherever these maliks or these Lashkars are strong, they will be able to drive back the Taliban. But the Taliban will move to another area where they have strength. So, for instance, there are other areas within the northwest where, for instance, those tribal heads are really leaders of the Taliban. So, you know, they will gravitate there, and it’ll be more difficult for the government to remove them from those areas. Also, they could move into the interior of the country; that is, they could go into the urban centers and cause more havoc there. So I really think this is not the way to deal with the problem; it’s only going to magnify it. What they need to really do is to look at the social structures in that part of the country, which are really very depressed—people don’t really have the means of livelihood, there is really no industry, there’s no education. Those are the basic needs that people need to be met, and which the government is not doing anything about. So I really think that this is a policy which is going to have some really long-term implications, and I really feel that it’s going to magnify the problem rather than decrease it.

AMIN-KHAN: I think it is possible, and there has to be a combination of strategy. I am not saying that the military should be done away with. I think that the military is needed. But the military’s needed as a threat, that in case these agreements don’t really pan out, then force will be used. What is happening now is the government is relying exclusively on its military muscle. The same is the case for the US and NATO forces: they feel that there is a military solution. But now I think even NATO’s recognizing that, and they’ve come out in saying that there is really no possibility of trying to do away with the Taliban just by using military force.

AMIN-KHAN: I think the Lashkars, I would say they are ideologically neutral in this instance. They could, you know, easily go onside of the Taliban too. But given that there is really an economic necessity for them to do this, and if the government is paying them to fight, they will join their ranks—and plus they’re getting arms for it. So I think I would say that ideologically they’re neutral, but things could shift in a hurry if, for instance, a wrong move is made by the government.

NKWETA: Is this a dangerous move?

AMIN-KHAN: I really think they’re playing with fire. Given that you armor a people and you arm them at a point that they have all the sophisticated weaponry at their disposal, you know, that could be used in any way. Let’s supposing the Taliban are done away with. What do you think? That those guys are just going to surrender their arms? They’re not. And I think that’s where things can go, because, you know, this similar thing has happened, you know, about 20 years ago, when the mujahideen were armed by both the US and Pakistan, and look what that has turned into. The other ones have now become the Taliban. So what happens when these people, the Lashkars—the problem gets resolved, let’s just say, and the government and the military moves back? The people are still armed, and then that can be used in a whole other different direction.

November 29, 2017
Sign Up for Our Newsletter
Help Us Make Real News!