Songwriter Bruce Cockburn explains the origins of the song Pacing the Cage, "a lament about being stuck."

Songwriter Bruce Cockburn explains the origins of the song Pacing the Cage, "a lament about being stuck." 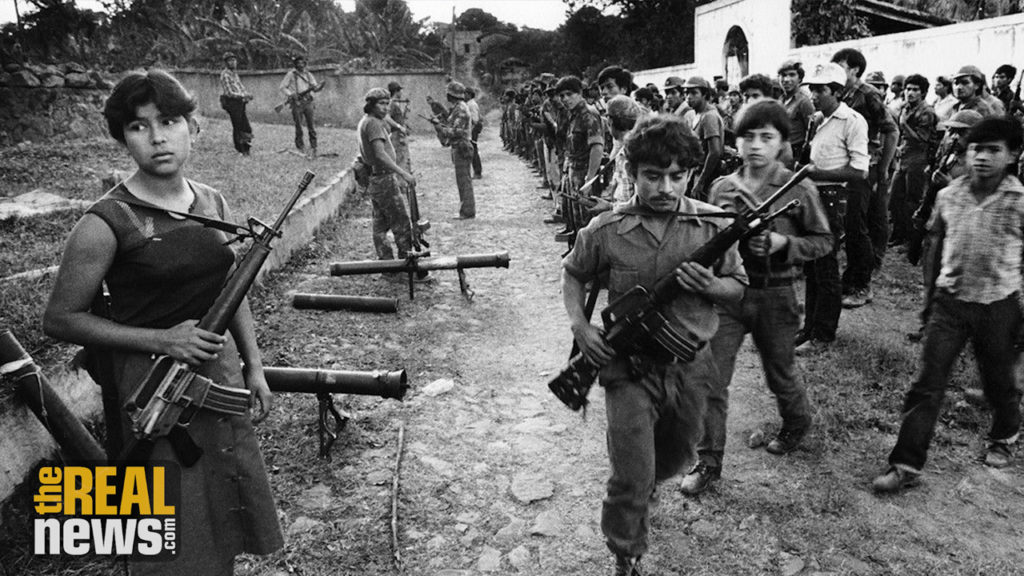 PAUL JAY: Welcome back to Reality Asserts Itself on The Real News Network. We’re continuing our discussion with singer songwriter Bruce Cockburn. Thanks for joining us again.

BRUCE COCKBURN: Glad to be with you.

PAUL JAY: So what’s the story behind Pacing the Cage? This is–you’re sounding frustrated.

BRUCE COCKBURN: Yeah, trapped. You know, stuck. I mean, it’s something everybody goes through sooner or later. And hopefully less than more, you know. But at this particular point, I was in a situation that I felt that was kind of going nowhere, and I felt like …

PAUL JAY: This is personally, musically?

BRUCE COCKBURN: Yeah, personally. Not–well, no. Not musically, no.

PAUL JAY: Because Pacing the Cage is a wonderful song.

BRUCE COCKBURN: Thank you. But the–no, I wrote that song and a song called Night Train almost at the same time.

And Night Train was a kind of, a kind of personal manifesto, in a way. But Pacing the Cage was more a lament about just being stuck. And I think the … just looking at where I was and thinking, you know, I want to get out of this somehow. I had a fan accuse me of having written a suicide note when he heard that song. Which it wasn’t intended to be, at all. But it was certainly an expression of there must be some way out of here. And it was a while before there actually was. But you know, that was what the song was trying to talk about. And you know, I mean, I’ve done this stuff for a long time. I know when I feel an impulse to write a song whether or not it’s likely to have any kind of application beyond my own circumstances. That one obviously did, right from the get go.

PAUL JAY: I should mention I used it in my film Hitman Hart: Wrestling With Shadows.

BRUCE COCKBURN: Well, Pacing the Cage, of course, had a very specific reference for Hitman Hart the wrestler, because they refer to the ring as the cage, which I didn’t know when I wrote the song, and wasn’t thinking about that. But I just pictured a kind of angsty ennui, a feeling of just being, being trapped where you are, but having put yourself there.

PAUL JAY: In terms of your spiritual, religious path you were stuck?

BRUCE COCKBURN: Well, I was–no, that wasn’t so much … It was more day-to-day than that. But I suppose I don’t have to–I’d have to spend more time than we probably have thinking about it to give you a good answer to the spiritual side of it. But it’s, it’s basically a plea, I suppose, to be relieved of the that sense of being trapped. Of pacing the cage. It’s like, I felt like an animal that’s where it doesn’t want to be.

BRUCE COCKBURN: Yeah. It stopped when I got out of the situation I was in. Which happened later, a little bit later. But it’s been one of the songs that people have requested a lot over the years since it was released, because of, I think, the degree to which everybody goes through that sometime in their life. You get a job you think is going to be a great job, and after a while it gets really boring or it gets really, you know, it weighs on you heavily. And much of your life is about a search, not just for meaning, but to live a meaningful life.

PAUL JAY: You felt stuck, in terms of that?

BRUCE COCKBURN: Yes, I felt like I didn’t know what to do next or where to go with it, or what. It’s like–I felt like I was treading water.

I mean, I was treading water in a pond of my own creation, but treading water nonetheless. And it felt like I really wanted some relief from that, I guess. That’s the feeling that the song tries to express. It’s like, I’ve done all this stuff. I’ve proven who I am over and over again. I’ve–You know, and by the end of the song I’m sitting there. It’s like, almost like a scene from a spaghetti western. There’s just the–there comes the stagecoach way in the distance, and it’s coming this way, and eventually it’s going to get here, and it’s the stage out of here. But it’s way over there right now. Very far away.

PAUL JAY: Do you want to talk more about what the situation was?

BRUCE COCKBURN: Not especially. I mean, it was personal. It was the circumstances I was in that were the immediate cause of it. But I think anybody going through midlife crisis, for instance, might find themselves feeling the same way. I don’t think that’s what I was going through at the time. It might have been. But I mean, it might have been bigger than just the immediate situation, is my point. But certainly, you know, I felt it to be a product of the more recent choices that I had made up to that point.

PAUL JAY: OK. Please join us for the continuation of our series of interviews with Bruce Cockburn on Reality Asserts Itself on The Real News Network.