Outrage at Baltimore School Board Meeting Over Freezing Classrooms 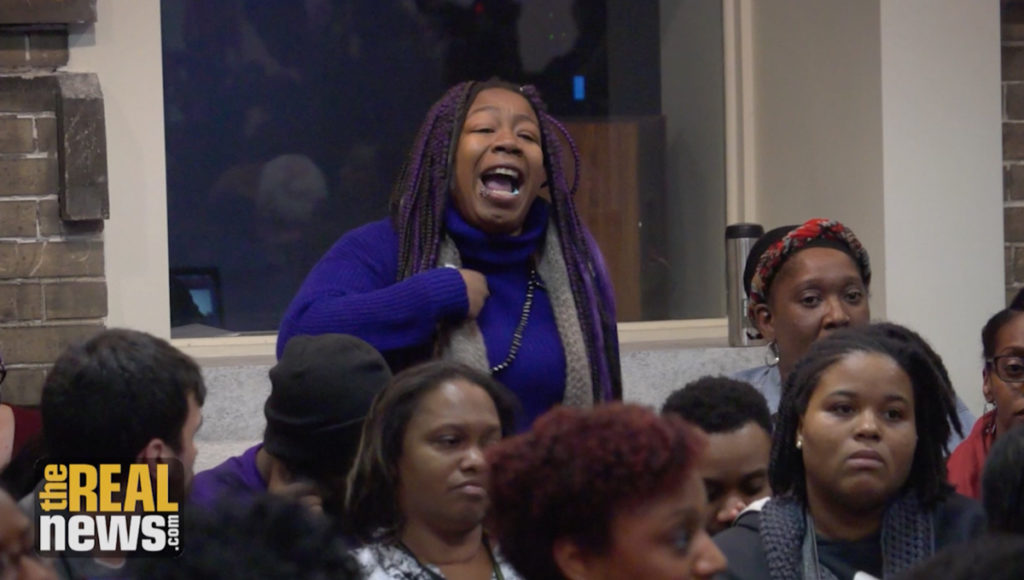 SPEAKER: You don’t know how it feels to see my granddaughter, at four years old, go into a cold school.

SPEAKER: This heating situation isn’t new. It’s out of sight to the general public and has become one of the many unacceptable norms to those who are in the schools daily.

LACHERYL JONES: Shame on us. That it is acceptable, or even an option to have the children of Baltimore City in this current situation. The children were defenseless. Not only defenseless but are being prevented access to one of the greatest weapons they will ever have in this lifetime. The weapon of knowledge and empowerment through education.

JAISAL NOOR: Despite an overflow audience, the School Board delayed public comment, which outraged the audience.

SPEAKER: This is a tragedy. What if we couldn’t make it on the 22nd? We got jobs! I can’t even really go to work like I want to because I’ve got to take care of my children first. I shouldn’t have to make the decision.

CHERYL CASCIANI: The emotion, and while it was not in the normal order of things, we appreciate that you spoke. It’s not an easy time for anybody, particularly with children and grandchildren in the schools. You are right. You’re wrong that we don’t care about it and that we’re not trying to do something about it.

JAISAL NOOR: The School Board ultimately relented and allowed public comment to happen about 45 minutes after the School Board meeting started. Many in the audience blamed the state of the schools on the state and Republican Governor, Larry Hogan, who has said the state gives enough money for Baltimore schools, and blamed mismanagement.

KIM TRUEHEART: I’m gonna point fingers at Governor Larry Hogan and Annapolis. We are one of the poorest jurisdictions in the state of Maryland, and we depend on state funding. If the funding protocols don’t accommodate the fact that I don’t have a big bank account, right? That I can write advanced checks on, then the funding protocols need to change. Don’t be sending us a little stupid 2.3 million dollar check, when you rescinded over 65 million dollars in projects. I want a check in Baltimore City, this week, for 65 frigging million dollars.

KHALILAH M. HARRIS: Nobody’s hands are clean. Our elected officials, City Council, Mayor, Governor, our state delegation. Everybody has a problem because constantly what we do is see a… Listen, I was featured in People Magazine 10 years ago, sat in front of this board 10 years ago, talking about exactly the same issue. Exactly the same issue. A shell game was played with the education trust fund, saying that we were going to have additional funds from these casinos, something that also installed to take away from our communities and build inequity. We don’t have that money. That money was moved out and now you’re saying that we don’t have enough money, Larry Hogan.

CRISTINA DUNCAN EVANS: My immediate concern is actually about the narrative. It’s not about the conditions that my students are facing because they’ve been facing these conditions for years. I trust my school administration to make every effort to make sure that my students have heat, but what I’m concerned about is a national narrative that basically blames Baltimore City for its poverty and doesn’t acknowledge that this is something that’s been done to Baltimore City by decades of neglect.

JAMAL JONES: A lot of this has to do with the systemic oppression of Black folk, in general. People cannot be naïve enough to believe that this facilities issue is a claim that came about just now, right. There was an entire 2.1 billion dollar campaign called The Transform Baltimore Campaign headed up by Baltimore Education Coalition that was won in 2014 because of the issue of knowing that our school buildings have been dilapidated and eroding, consistently since the 70’s when they were built.

LACHERYL JONES: Because we aren’t watching, we are here regularly, consistent. Starting at a PTA at your school. Going to a PTA meeting. Supporting the people that go out to the meetings and it’s only a sprinkle of us. It should be all of us. All of us. This should be a norm. This shouldn’t be the minority. This is a regular School Board meeting. This should be all the time for our babies.

JAISAL NOOR: The School Board has organized a public forum later this month but activists are demanding that happen sooner. We’ll keep following the story. I’m Jaisal Noor, for The Real News Network with Cameron Granadino.