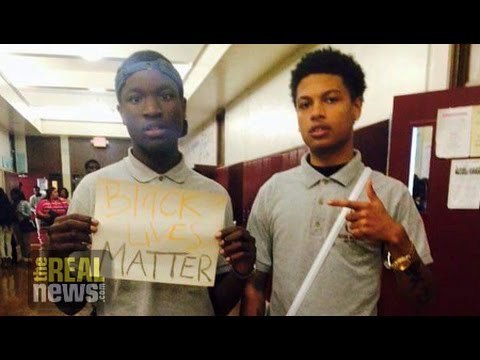 Well, less than a year since the killing of Michael Brown and the anti-police brutality uproar that ensued, we go back now to St. Louis for yet another set of protests in the aftermath of yet another police shooting. This time, 16-year-old Brandon Claxton was shot by police this past weekend and is now paralyzed. Among those protesting and arrested was Rev. Osagyefo Uhuru Sekou. Rev. Sekou is an author, documentary filmmaker, public intellectual, organizer, pastor, and theologian, and joins us now from St. Louis.

Welcome back, Rev. Sekou, to the Real News Network.

REV. OSAGYEFO SEKOU: It’s a blessing to be with you, dear brother.

BALL: So please just update us and tell us from your, from your perspective and experience and being there on the ground, what’s happening? What happened, and what is happening?

Over the weekend Brandon Claxton was shot by the police. He’s 16 years old, was in possession of a weapon but not aiming it at police. A 6-year-old girl was standing next to him when he was shot in a park, so afraid that she ran out of her shoes. And his 14-year-old brother was arrested, as well. And his 14-year-old brother was held for over about 48 hours without any contact with a lawyer or a parent. The mother was not allowed to see Brandon.

And so we began protests two nights ago in which a number of the [lost voices] were arrested, subject to beatings and pepper spray. We returned last night in solidarity of those young folks who had been arrested as well as to highlight and pressure the city government to give this mother access to her baby.

As a result of those protests and those actions, the mother was given access on yesterday evening.

Are there any updates to that story that you can share with us at this time?

SEKOU: I mean, I think one of the things that we have to be concerned about is that the obsession of fact versus truths, right. The truth is that the police use an excessive amount of lethal force in our community, and that they should be held accountable for that excessive amount. It is believed that he had a weapon, but in St. Louis there’s a crew called the jump out boys, is what we call them. Police officers in unmarked cars and plainclothes jumping out on particularly youth in quote-unquote high crime areas.

So the jump out boys jumped out on him. He ran. Had the gun in his hands, and then ran into another flank of police. But the gun was in his hand and to his side, and he did not brandish it toward the police.

And if he stole the gun, if he was in possession of the gun at the time of his encounter with the police, the use of lethal force is, seems the first option for police officers when encountering young people in our community. And as you know from the report [that you] played a role in, Operation Ghetto Storm. Every other day in America our children are subject to this kind of lethal force from the police, and it just simply has to stop.

BALL: Well, Rev. Sekou, thank you very much for giving us this quick update. And we will look to be back in touch with you in the near future to continue our coverage of these and other related crises. Thank you very much.

BALL: And thank you for joining us here at the Real News Network. And as always, as Fred Hampton said, to you we say peace if you’re willing to fight for it. So peace, everybody. Catch you in the whirlwind.