The racial makeup of political leadership in Ferguson, MO has changed in the first municipal election since the killing of Michael Brown in August, 2014. Will this lead to real policy changes in the town?

The racial makeup of political leadership in Ferguson, MO has changed in the first municipal election since the killing of Michael Brown in August, 2014. Will this lead to real policy changes in the town? 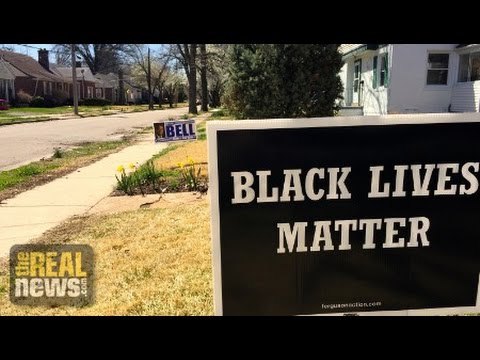 ANGEL ELLIOTT, PRODUCER, TRNN: I’m Angel Elliott for the Real News Network in Baltimore. Our eyes are once again on the St. Louis County town of Ferguson, Missouri as residents made election history at the polls in the wake of months of national protests, racial tension, and [inaud.] upheaval after the killing of unarmed black teenager Michael Brown by officer Darren Wilson.

This was the first municipal election since the killing last August. Ferguson, where 2/3 of the 21,000 residents are black, public offices have had a historically white majority. This election turned the tides with a now split city council, three black and three white.

Joining me to discuss the results and what’s next for Ferguson is Reverend Sekou. Reverend Sekou is a Freeman Fellow with the Fellowship of Reconciliation. He’s the author of the forthcoming book Riot Music: British Hip-Hop, Race, and the Politics of Meaning.

Thanks for joining us, Reverend Sekou.

ELLIOTT: Now, last election only 12% of registered voters turned out at the polls. But this one that number doubled. Why was it so important for Ferguson residents to turn out the vote this time around?

SEKOU: I mean, what we’ve seen is the way in which a kind of political cosmology has worked. So social movements create public, create political space, and so they are thermostats. They set political climate. Whereas that elections and legislation are thermometers. They measure political climate. And so what we’ve seen with these, the doubling of the African-American representation, tripling of African-American representation on Ferguson, is because the people in the street created a political space whereby political candidates can be [emerged].

Now it becomes a task of social movements to hold those two folks accountable. And it also has meant that people have felt beat down, dogged out, ignored by the political system of Ferguson, have been empowered by virtue of the fact that young people have stayed in the street.

ELLIOTT: Right. Now you know, the police department and the city council and the leadership in general really, in the past, stood as symbols of the systemic discrimination that residents there were facing. What does it mean now that the city council is more reflective of the constituents that live there?

SEKOU: I think the reality for us is that we’re not just talking about individuals, we’re talking about a system. The Department of Justice report vindicated the cries of the young people that have been in the street for over 200 days. And that we’re talking about the DoJ report revealed that not only was there racist outcomes in terms of discrimination, but also that the city writ large of Ferguson had racist intent.

And so hopefully we will see a tempering of that racial intent. I personally would like to see some form of legislation that limits, that places a cap on how much money can be taken by a city to fund itself from tickets that have led to a draconian system of ticketing. Over 23,000 tickets issued in 2013. Some 10,000 African-Americans have arrest warrants out of 15,000 in Ferguson.

And so we need to see a full repeal of a system, at the level of policing, and that the city council may be able to create some legislation that will hold police accountable vis-a-vis a civilian review board.

ELLIOTT: I think you read my mind. I was going to ask you about the DoJ report found that they were using these tickets and law enforcement to create revenue for the city. How much power does the new city council have to actually change that system?

SEKOU: Well, early on about two months in, the city council began to pass a number of meager reforms tampering the excessive ticketing. And so already precedent was set in the last session of the council, also by virtue of the pressure of the young people in the street. Citizens showing up at the city council meetings, raising these questions. And so it clearly has some power to temper this, and we need to see them exercise more power in relations to repealing these draconian forms of ticketing and eliminating what has become essentially a debtor’s prison.

ELLIOTT: Right. Speaking of young people protesting in the streets, will this new city council be willing to work with activists, and activist organizations, like the Don’t Shoot Coalition, and the Organization for Black Struggle, to bring about reforms?

Again, all this election did was measure the political climate. It is the task of the social movement to continue to set it.

ELLIOTT: Now, you talked about a civilian review board for the police. What type of power does this new city council have to create a police review board that will actually have the authority to try and help prevent cases like Michael Brown from happening again?

SEKOU: Well, what we’ve seen around the country, and just let us pause for a minute and raise the name of Walter Scott, our dear brother shot in the back by the police in Charleston, South Carolina. And that this is an epidemic around the country. Every other day in America, black bodies are subject to the arbitrary violence of police. So we just want to pause to raise the name of the family, and the dignity that that family has displayed while their child, their brother, their son, has been laid in the street.

And so part of what we need to do to ensure that this does not continue to happen is create civilian review boards that have some penal power. They must be able to mandate police officers and other citizens to come and hold an account, and bear witness before the court of the people in such a way that we can offer some form of justice in the aftermath of these killings.

Which are, again, all too frequent. But also, we’re talking about a system. 21,000 people in Ferguson, 15,000 African-Americans. 10,000 of them got arrest warrants. 23,000 tickets issued. Combined with the high level of transfer of militarized weapons to our local municipalities such as Ferguson, and that this city council must intervene in all of these matters, who are reflective of the wants, the desires, the cries, and the moans of the [inaud.]

ELLIOTT: What’s next for Ferguson now that this new city council has been put into place?

SEKOU: We’re going to continue to stay in the street.

ELLIOTT: All right. Thank you so much, Reverend Sekou.

ELLIOTT: And thank you for joining us on the Real News Network.