The Struggle in Ferguson Was Never Just About Bad Police 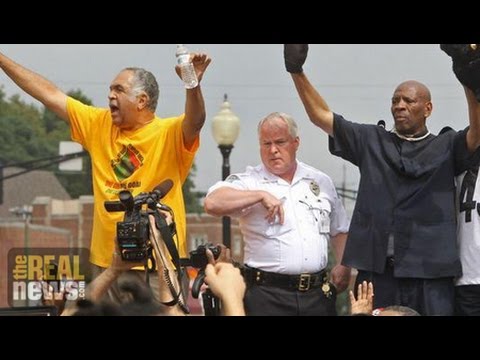 Last week, the Department of Justice released two reports in reference to Ferguson. One of the reports concluded that there was no evidence to lay criminal charges against Officer Darren Wilson for shooting Michael Brown.

The second report, issued by Attorney General Eric Holder, recommended that Ferguson completely revise its criminal justice system, stating that there were so many constitutional violations there that it could not be reformed, only abandoned. Let’s have a look at what he had to say.

ERIC HOLDER, U.S. ATTORNEY GENERAL: The Justice Department announced the conclusion of our investigation and released a comprehensive 87-page report documented our findings and our conclusions that the facts do not support the filing of criminal charges against Officer Darren Wilson in this case. Michael Brown’s death, though a tragedy, did not involve prosecutable conduct on the part of Officer Wilson.

Violence is never justified. But seeing in this context, amid a highly toxic environment, defined by mistrust and resentment, stoked by years of bad feelings, and spurred by illegal and misguided practices, it’s not difficult to imagine how a single tragic incident set off the city of Ferguson like a powder keg.

It is time for Ferguson’s leaders to take immediate, wholesale, and structural corrective action. Now, let me be very clear: the United States Department of Justice reserves all of its rights and abilities to force compliance and to implement basic change. Nothing is off the table.

PERIES: These two reports have led to three resignations of city administrators. But activists on the ground are saying this is not enough.

Now joining me to talk about all of these developments is Reverend Osagyefo Uhuru Sekou. He’s a freeman fellow with the Fellowship of Reconciliation. He is author of the forthcoming book Riot Music: British Hip Hop, Race, and the Politics of Meaning.

Thank you so much for joining us, Reverend.

REV. OSAGYEFO SEKOU, FREEMAN FELLOW, FELLOWSHIP OF RECONCILIATION: It’s a pleasure to be with you again, dear sister.

PERIES: So, Reverend, the obvious question here is: how is the community responding to these two reports?

SEKOU: I mean, what we have to begin with: respond to these reports and the resignation with an essential truth and an indisputable fact. If it were not for the courage of everyday people taking to the street, putting their bodies on the line, and the high level of police repression that they experience at the hands of state agents, we would not even have this conversation, and the Department of Justice would not have investigated setting into motion a set of dominoes that have knocked down up until now three individuals who are responsible.

And then, what is more telling, if not /ˈsɛləbəˌtoʊri/, of this moment is the fact that it’s not simply about individual police officers, but whether a draconian system that has subjugated black bodies to arbitrary policing and an injustice system is mediated in the courts.

PERIES: Now, is this enough? We had three resignations of some administrators, but the report, the second report I referred to, is really calling for a systemic overturn of the whole entire criminal justice system. How is the community feeling about those recommendations?

SEKOU: I mean, let us be clear that our demands have never simply bit about courts, simply about individual police or police departments [incompr.] a remaking of America and the remaking of a system that seeks to honor the humanity of all of its citizens with due process of the law.

And so it is not enough. It is a step in the right direction.

And at one level there something so comic about it, there’s something both sad and laughable, by the fact that the Department of Justice has to issue a report stating that in an American judicial district or functioning court has to treated citizens equally, that that should be normal to them, that there at one level is both a victory in telling that truth, but also a sad commentary on our nation’s criminal justice system, which continues to expand this prison-industrial complex at an exponential rate.

SEKOU: Well, one, the engaging in the system is young folks and people have engaged in it every day, given the high level of policing, ticketing, and arbitrary sentencing that has been at work in both Ferguson, but also in greater St. Louis, but also throughout the country. And so Ferguson is America in that sense.

Secondly, there is a consideration that folks are engaging him, particular the work of the Don’t Shoot Coalition and the Organization of Black Struggle, the holding people’s assemblies to begin to have these conversations. There is a push for a community review board as it relates to policing practices in the city of St. Louis; although it does not have subpoena power, it is a step in the right direction. And so we are clear that the people have consistently been willing to engage in a weak reformation of the system before Ferguson. The community review board of the police in St. Louis city has been a long and protracted struggle. It is just only a fact that /kwir/ black youth took to the streets of America and have accelerated a conversation that began in the 1960s and that is part of the historical struggle of black people inside the American empire.

PERIES: Now, Reverend, we know that revising the system and getting engaged in the process is of course a Democratic right for its citizens. But extending that Democratic right, is there a plan or a strategy, electoral strategy in place to actually take over the city of Ferguson?

And so, as folks continue to stay the street–there were recently elections in automatic wards of St. Louis City. And so there has been some turnover among younger progressive–mostly women, who have been elected to serve in a city council style representative office. And then, in the city of Ferguson, as elections begin to come up, we’ll definitely see a slate of candidates.

PERIES: Reverend Sekou, we look forward to further reports from you about the developments you’re making on the ground. Thank you for joining us today.

SEKOU: Thank you and bless you.