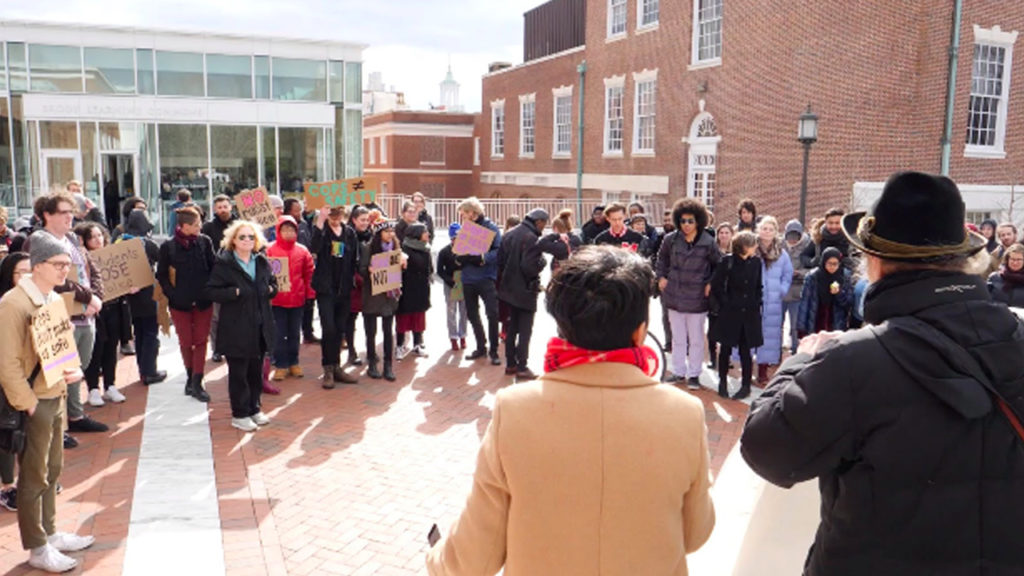 JAISAL NOOR: Johns Hopkins is facing growing opposition to its quest to obtain an armed, private police force. The Real News will be covering the legislative hearings on the proposal that begin Friday in Annapolis. Hopkins says its plan has wide support, but a growing number of students, faculty, and neighboring communities are speaking out against it.

Hopkins—a leading educational and medical institution— says the bill to create its own police force is the best way to combat crime on campus. Last year, representatives tabled a similar proposal after widespread student and community pushback. Hopkins says the new proposal offers more oversight, accountability, and is paired with additional funding for preventative measures like youth programs.

At least one neighboring community association has come out in support, but on Monday residents in Harwood voted to oppose.

ALLISON DUGGAN, HARWOOD COMMUNITY RESIDENT: Last year it was presented and it was so disastrous and arrogant, on their part. It already showed how they will approach it moving forward. I think the decision was made then this is a bad bill and to squash it. And if Hopkins really did respect people and their thoughts and what they said, they would have just left it alone.

But this same private police force has also generated community protests, including over the shooting of student Charles Thomas in 2018.

Over 90 Hopkins faculty have signed a letter opposing the bill that reads: We believe that a private police force conveys a perception of Hopkins as a campus in an antagonistic relation with nonwhite and economically precarious Baltimore City and subscribes in its enforcement policies to the logic of racial profiling.”

This echos the president of Hopkins Black Student Union, who spoke at a recent rally:

CHISOM OKEREKE, PRESIDENT OF HOPKINS’ BLACK STUDENT UNION: Being a black student here, not just being a part of the Black Student Union, I’ve constantly seen my peers, my friends, myself being targeted by the already present law enforcement. And it is on this campus. And it’s very terrifying for us to think that these minor inconveniences of being assumed no good people on this campus–it’s scary to think that that could be weaponized and be turned into a matter of life and death.

JAISAL NOOR: The faculty letter also cites a recent poll that found 75% of undergraduate students were in opposition to the creation of an armed police force.

Residents also cite mistrust between Hopkins and communities of color going back generations, including the displacement of hundreds of mostly black residents from the areas adjacent to Hopkins East Baltimore campus.

Despite these developments Hopkins remains committed to the effort. It’s gotten the support of Democratic leaders in the state, and former ny mayor Michael Bloomberg, who recently gave the university a record $1.8 billion dollar gift

Meanwhile, Hopkins Alumni and State Senator Mary Washington says she opposes the bill because it privitzes a public good—she’s introduced her own proposal that would allow private universities like Hopkins to be served by University of Maryland police.

Several members of  the Baltimore City delegation told The Real News they remain undecided on the bill. The delegation will hold an informational hearing at Friday at 9AM.

But as a Hopkins spokesperson told the Real News, the institution doesn’t need the bill at all: “Like any other private entity in Maryland, Johns Hopkins could hire private armed guards today, under existing law; but we do not want to take that approach. Instead, we want to contribute to the public safety of the neighborhoods and communities we are part of and create a small, model university police department.”