Oil Drilling in the Latin America 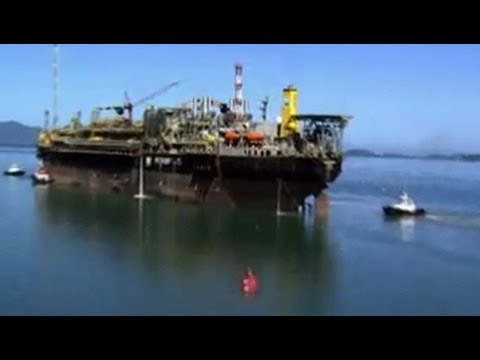 OSCAR LEÓN, TRNN PRODUCER: On October 21, 2013, the National Petroleum Agency auctioned the Libra field, the largest oil reserves in Brazil. The Brazilian oil company Petrobrás formed a consortium with CNPC and CNOOC from China, Royal Dutch Shell from Netherlands, and Total oil from France. Only one bid was placed, and the consortium won the auction.

In the Libra field lays 12 billion barrels of oil, which could generate profit up to $1 trillion in 20 years. This could also place Brazil as one of the world’s largest oil producers.

In 2010, Dilma Rousseff, then presidential candidate, won a good share of votes by claiming that her opponent, Jose Serra, had intentions to privatize the Brazilian oil.

She then considered the privatization inadmissible, since the oil laying in the pre-salt layer of the ocean was a wealth to be used exclusively in favor of the Brazilian people.

DILMA ROUSSEFF, PRESIDENT OF BRAZIL (SUBTITLED TRANSL.): Jose Serra’s adviser on oil and energy stated that is in favor of the privatization of the pre-salt, that international private companies could do the pre-salt exploration. That was a serious statement, because the pre-salt is one of the most important resources of our country.

To defending the privatization of the pre-salt means taking money out of the country, blocking investments in education, science, and technology, environment, culture, health, denying the country a passport to the future.

LEÓN: Only three years later, Dilma Rousseff has changed her position, and critics say she will not only allow the private companies to exploit oil, but she does it in a very unfavorable way for the Brazilian people.

The winning consortium offered to the Brazilian government 41.65 percent of total production, which was the minimum amount required. On average, countries keep 80 percent of profits in areas such as Libra. This is because the oil has been already found, and even calculated, so the investment presents a greatly reduced risk.

This is Francisco Soriano, a longtime engineer at Petrobrás, now director or the Oil Workers Union of Rio.

FRANCISCO SORIANO, DIRECTOR, OIL WORKERS UNION OF RIO DE JANEIRO (SUBTITLED TRANSL.): On the Libra field the bonus that the winning companies, including Petrobras, will pay to the state is 15 billion reais, which will not be invested in education, health care, or transportation. It will be used for the payment of public debt.

LEÓN: The winning company must also pay $8 billion bonus, which represents only 0.01 percent of the potential richness of Libra field.

Besides the bonus, the company that will be responsible for operating the field ought to pay exploitation rights, equivalent to 15 percent of the total amount of barrels extracted.

The profit from this investment, if any, will be allocated to education and health. The exploitation rights, however, will be returned to the winning consortium as a compensation for the total cost of operation over the estimated 20 years of exploration.

SORIANO: Did you know that the winning company will receive oil exploitation rights back? You will not hear any company participating at the auction complaining about this fee, because they will pay it in cash and will be compensated with oil, which is the best currency in the world. This is unbelievable.

LEÓN: Approximately 50 percent of Brazilian oil will remain in the hands of the group of companies that presented the only bid at the auction.

It can be exported as raw oil and shipped directly from the platforms without going through customs controls.

According to Soriano, China, a country that is part of the consortium with two of its national oil companies, opened in Brazil a direct border exempt from tax, exploiting the Brazilian raw reserves in a way not seen since the colonial times.

SORIANO: This is even more serious, because when you have a state-owned company operating here from another country, it means that it is the main operational center and we are just a colony.

LEÓN: If production does not exceed 4,000 barrels per day and the price per barrel is less than $60, then the Brazilian government is committed to relinquish its 26.9 percent share of the profit.

The federal justice received 25 judiciary actions challenging the auction, rejected 18 of them, claiming that there were no illegalities in the process. The auction can still be cancelled if judges find fraud or irregularities.

A thousand soldiers reinforced security outside the hotel that hosted the event.

Protestors took the streets to show the people’s dissatisfaction with the auction, maybe also moved by the allegations of Edward Snowden, who announced that Petrobrás was repeatedly spied by U.S. intelligence.

Many now believe that this privileged information could have compromised and undermined the transparency and fairness of the auction.

SORIANO: You show your courage when you say, “The auction is suspended,” because it is proven that the U.S. spied on us and knows all about the Libra oil field. They know if Petrobrás will place a bid and how much will they bid, they even know the territory better than Petrobrás.

LEÓN: Despite being the 7th largest economy in the world according to the International Monetary Fund, at the United Nations Human Development Index, Brazil occupies a bitter 85th place.

SORIANO: We are one of the countries with the worst income distribution in the world. If the oil is under the control of the people, it will not be used for profit which would only enrich entrepreneurs who do not think about the population.

LEÓN: Soriano believes that the Brazilian government thinks the short term and is content with the 15 billion that will be used to close the year 2013 with a positive balance, covering the interest costs related to the Brazilian debt, a swing that favors only the international financial capital.

If the government will think long term, he continues, the Brazilian people could benefit directly from approximately $1 trillion in 20 years.

SORIANO: What to do? We should use this fantastic commodity that is the pre-salt oil layer with a well-structured social program.

LEÓN: The protest in the street of Rio today were relatively small. There is discontent with the government. Even before the massive protests erupted in the summer, it has been widely reported how President Rousseff jumped nine points in popularity polls by openly criticizing U.S. spying programs, going from 49 percent in July to 58 percent in September, according by MDA Consultores, a local polling firm.

For now, it appears she is not taking the same approach towards corporate power.

Presenting an special report by Nerita Oeiras, this is Oscar León.