On October 3rd 2013, Ecuador's National Assembly authorized the project to drill for oil in the Yasuni National forest, which is a biosphere reserve and home of endemic tribes and unique animal species.

On October 3rd 2013, Ecuador's National Assembly authorized the project to drill for oil in the Yasuni National forest, which is a biosphere reserve and home of endemic tribes and unique animal species.

Oil Drilling in the Latin America 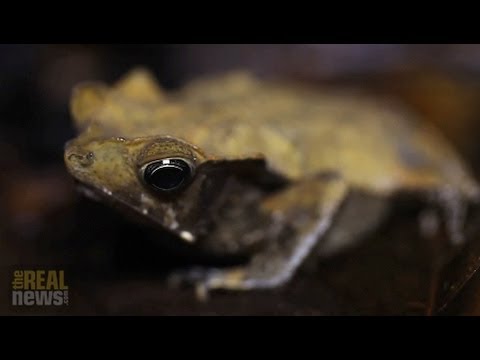 OSCAR LEÓN, TRNN PRODUCER: On October 3, 2013, Ecuador’s National Assembly authorized the project to drill for oil in the Yasuní national forest, which is a biosphere reserve and home of endemic tribes and unique animal species.

It is estimated by the Ecuadorian government that in that area, there are around 920 millions barrels of crude oil, for which Ecuador could get up to 7 billion dollars, maybe more, some say much more, over the next 30 years. This accounts for 20 percent of the country’s oil reserves.

The Ecuadorian National Assembly passed the legislation, with 108 votes in favor against 25 authorizing the operation of the oil fields.

GABRIELA RIVADENEIRA, NATIONAL ASSEMBLY CHAIRWOMAN (SUBTITLED TRANSL.): We will drill for oil in blocks 31 and 43. The intangible zone is excluded, which is the south of the park, of course.

LEÓN: “Intangible zone” is the area where indigenous tribes that haven’t been contacted by the Western civilization live.

To take care of those nomad tribes, the congressmen declared that “cautionary measures” would be used, to avoid harming the people that lives deep in the Amazon rain forest.

This is Carlos Viter, a government party congressman, making the case for exploitation.

CARLOS VITER, CONGRESSMAN, ALIANZA PAÍS (SUBTITLED TRANSL.): We will take cautionary measures, like monitoring the jungle and adopting an immediate suspension to all operations if necessary; also, applying protocols to prevent violence and even to prevent any contact with non-contacted tribes.

LEÓN: All of the Alianza País Party members voted for the project, while the opposition denounced that Article 57 of Ecuador’s constitution was being ignored. This legislation does not allow mining and oil projects to be set up on ancestral lands without explicit consent of the local population.

Alicia Cahuiya, Waorani leader, whom had been invited by the government to speak in favor of the drilling, ditched the script, surprised governmental majority legislators, while the opposition cheered.

ALICIA CAHUIYA, WAORANI LEADER (SUBTITLED TRANSL.): I protest because it is my home. Yes, there is oil there, but I do not agree with the oil exploitation. We should be consulted about Yasuní. Our elders do not agree with any of this.

Why are the Taromenane tribe people being killed fighting the Huaorani? Because you opened a road into the jungle!

We don’t want any of that! Let us live like Waoranis. That is what we want!

LEÓN: Alicia said she was given a speech that was written for her, a script she was ordered to read as her own, but she refused, speaking her mind instead. Learning about this, other indigenous legislators got very upset.

LOURDES TIBAN, PACHAKUTIK, CONGRESSWOMEN (SUBTITLED TRANSL.): This is the paper they wrote for (Mrs. Cahiuya). It is a shame! Who is behind all of this?

LEÓN: Other indigenous leaders were even more explicit:

PEPE ACHACHO, CONGRESSMAN, PACHAKUTIK (SUBTITLED TRANSL.): Starting today, the state is incurring in ethnocide against our fellows Tagaeri and Taromenane.

LEÓN: The Yasuní was declared biosphere reserve by UNESCO in 1998, because it is home for many tribes: the Waorani which coexists with the settlers; the Taromenane, and the Tagaeri, two other tribes living deeper in the jungle isolated from our society.

Journalist and filmmaker Carlos André Vera shot Taromenane, a documentary about the impact that the contact with oil and logging industry has had in the Waorani, Taromenane, and Tagaeri tribes.

CARLOS ANDRÉS VERA, JOURNALIST, DOCUMENTARY FILMMAKER: There is a genocide going on right now at the Yasuní National Park. And the circumstances that promote that genocide haven’t disappeared. As a matter of fact, they have gotten worse.

LEÓN: It is believed that the Waorani have already exterminated the Tagaeri in behalf of loggers, who pay them for their help finding and cutting cedar threes in the jungles.

LEÓN: Many studies/assessments made by international scientist teams, like this one for PLOS ONE, reveal that Yasuní is in fact the most biodiverse area of our planet. To this day, 121 reptile species, 150 kinds of amphibians, 598 kinds of birds have been discovered. And while they have verified 169 species of mammals, scientists believe that the total number of mammals tops around 204. As far as plant species, 2,113 have been cataloged but it is believed that thousands more are still unknown to us.

South American rain forest jungle, or Amazon, is considered the planet’s lung because its trees process CO2 and turn it into Oxygen. This added to the unique geography makes the Yasuní a one-in-a-million place that is believed to hold up to 15 percent of our planet’s biodiversity in a very small fraction of its territory.

Fernando Ehlers, a prime time TV host and journalist, has visited the park many times, and recently worked in there for some weeks creating a TV special about Yasuní. After visiting the rain forest on the company of scientists from San Francisco de Quito University’s scientific monitoring station, he has a good understanding of the importance this natural reserve holds.

FERNANDO EHLERS, TV HOST AND JOURNALIST: The ice ages that affected most of the planet millions of years ago, well, Yasuní stayed the same. So it was not affected by these phenomenons. So you could actually find in this place species that were before the ice age in the planet that inhabited the earth before the ice age. I think Yasuní is maybe the best reflection of what’s happening in the world. We know what we have, we know it’s very special, but we’re not willing to give development up in order to preserve it. So that’s very sad.

LEÓN: While the planet is arguably warming up because of carbon emissions and there is a number of energy companies profiting from it, the original Ecuador Yasuní-ITT Initiative will have provided an example for green development to other nations.

In part two of this special report, we will go over the story of the Yasuní-ITT Initiative.

For The Real News, this is Oscar León.